The Difficult Path to Changing Policing in America

During FCNL’s Annual Meeting and Quaker Public Policy Institute, Nov. 14-17, we will focus our legislative ask to changing policing in America.

We know that police operate very differently in Black and brown communities than they do in white neighborhoods.

We know that police operate very differently in Black and brown communities than they do in white neighborhoods. In Kenosha, WI, we recently saw Jacob Blake, a Black man, shot seven times in the back by police as his family looked on. This is seemingly one of an endless string of news stories involving a police officer shooting an unarmed Black person.

These examples of state violence against Black people are proof that institutional racism exists across government, including in the police. It must be rooted out and our lobbying during Annual Meeting is especially important.

The Friends Committee on National Legislation joined the civil rights community, led by the Leadership Conference, in submitting eight recommendations to reform policing:

The path forward is a difficult one. The House acted and passed the George Floyd Justice in Policing Act (H.R.7120), which included most of the eight points.

The Senate, however, proposed a more limited approach with S.3985, the JUSTICE Act. This is a bill that seeks to study the problem and create commissions rather than taking concrete steps to address the issue. That is why it failed to move forward.

We know what the problem looks like. Police are local institutions and are funded by city, county, and state governments. What we need to support local police reform efforts are meaningful reforms at the federal level. Many Republicans feel that the Justice in Policing Act usurps the role of states and local governments. That’s a part of why many did not support the House bill.

We need to continue lobbying our members of Congress that the George Floyd Justice in Policing Act (H.R.7120) is the right path forward to solving the crisis of local policing in the United States. We cannot wait for change to come from the 18,000 local law enforcement agencies around the country.

Change must come fast so that we are not lamenting the death of another Black man or woman again. 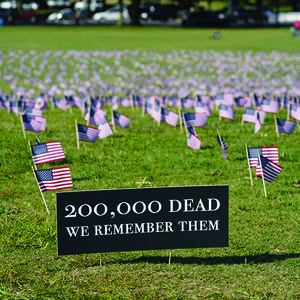 In these troubled times, it’s not surprising that people are anxious, gripped with uncertainty.