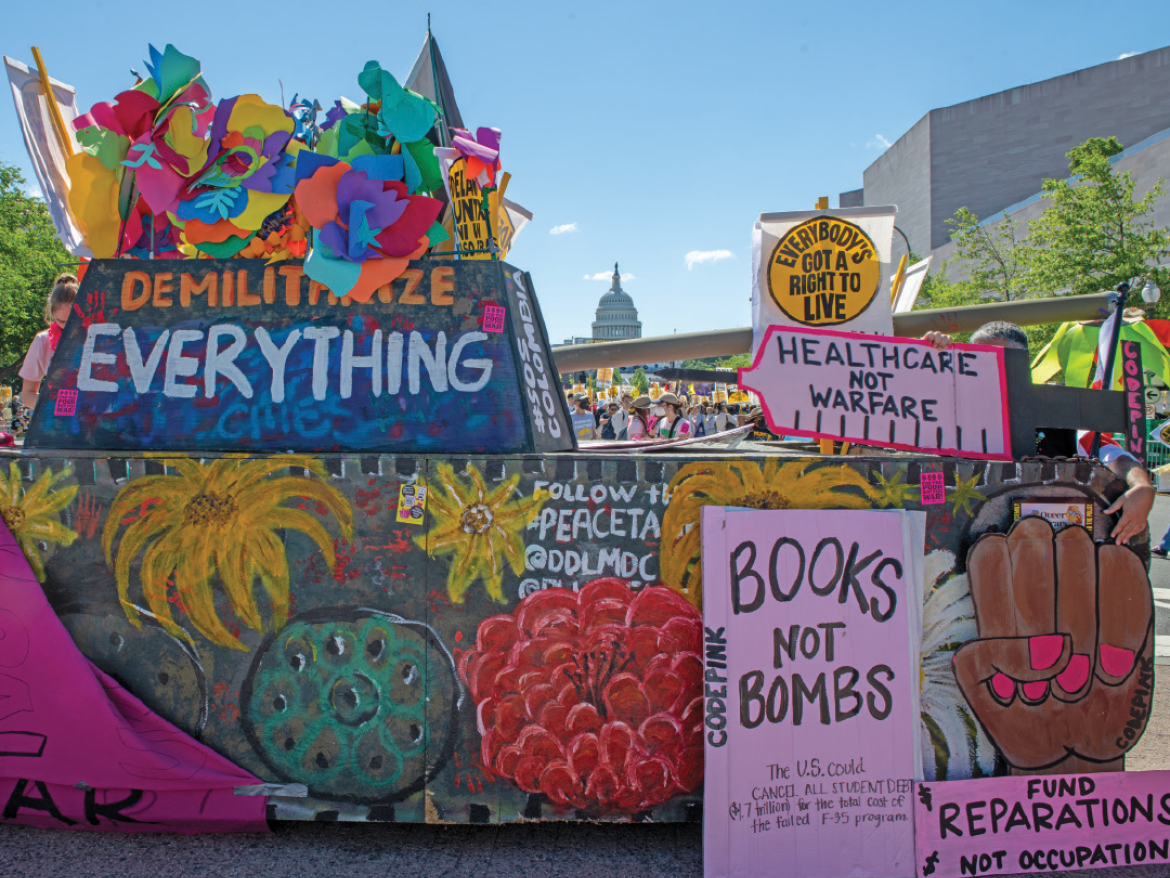 How do we build peace amid war?

Nearly 80 years ago, a group of Friends joined together across Quaker traditions with a common interest to bring a voice for peace to Capitol Hill during World War II. Their effort was small at first, and their chance of success must have seemed even smaller. The public largely supported the war and our country’s involvement in it. Few voices in Congress challenged the idea that meeting violence with violence was the only option.

But Friends had faith.

In its early days, FCNL began lobbying Congress to protect the rights of conscientious objectors, rebuild Europe, advance civil rights at home, abolish nuclear weapons, and support the United Nations. Centuries of refusing to participate in violence and actively practicing peace had convinced Quakers, again and again, that war is never the answer.

Centuries of refusing to participate in violence and actively practicing peace had convinced Quakers, again and again, that war is never the answer.

Since then, FCNL has consistently lobbied Congress to prevent and end wars and to invest in the tools and policies we need to advance a more just and peaceful world. We have not always succeeded, but we have made important gains along the way and helped open the eyes of many decision-makers to the possibility of a world without war or the threat of war.

Now, a devastating new war in Europe is again testing our faith and our Quaker Peace Testimony. Russia’s blatant invasion of Ukraine invades our conscience and pleads for an urgent and effective response.

The determination of the Ukrainian people to defend their country is honorable and understandable. It is hard not to want to support their fight in any way we can.
Yet, we also see the unraveling of humanity in this war as we have seen in so many others. The predictable cycle of violence is now feeding itself. More fighting with more weapons fuels more hatred, which fuels more aggression and leads to more death and devastation.

So, amid yet another war, how do we witness and work for peace on Capitol Hill and around the country? How do we hold onto the belief that peace is possible? While the White House and Congress rush through billions of dollars in military aid, FCNL is urging Members of Congress to ask the hard questions: When and how does this war end? What is the future of NATO and of US-Russia relationships? How do we avoid nuclear catastrophe?
In Ukraine, as in other wars, there are nonviolent options. We continue pressing for urgent diplomacy to secure a just political settlement and for more humanitarian, not military, aid. With other Quaker organizations and peace advocates, we are also asking how we can envision and bring into being a more effective, more just global system to prevent war and build peace for the future.

While we have been focused on building peace abroad, we have also realized that we need to build peace at home. The last two years of the pandemic have brought into focus the attacks on our democracy, the systemic racism, the white supremacy, and the rising violence in our communities. We simply cannot build peace abroad if our country is internally at war.

The reality is that FCNL has always worked to build peace amid war, whether domestic or foreign. Since those first faithful Friends brought their voices for peace to Capitol Hill, we have been strengthening our witness. We are now the largest peace lobby in Washington and a powerful grassroots network of advocates around the country.

The reality is that FCNL has always worked to build peace amid war, whether domestic or foreign.

We build peace by lobbying Congress and the administration to fund crisis prevention programs and long-term peacebuilding programs. We build peace by nurturing relationships with our legislators and engaging diverse coalitions to meet with them on the issues our communities care about.

And we build peace by sustaining our witness in even the most difficult times when our voice on Capitol Hill is challenged— and needed—most.

Peacebuilding is a process, not an endpoint. Our work together as FCNL stands on the shoulders of generations past whose faith was tested and grew stronger from it and who laid the path upon which we now walk.

Our witness for peace today—amid another war, amid rising domestic violence and the fraying of our democracy—carries on our Peace Testimony for those who follow. We persist as we always have, with courage, commitment, faith, hope, and with love.