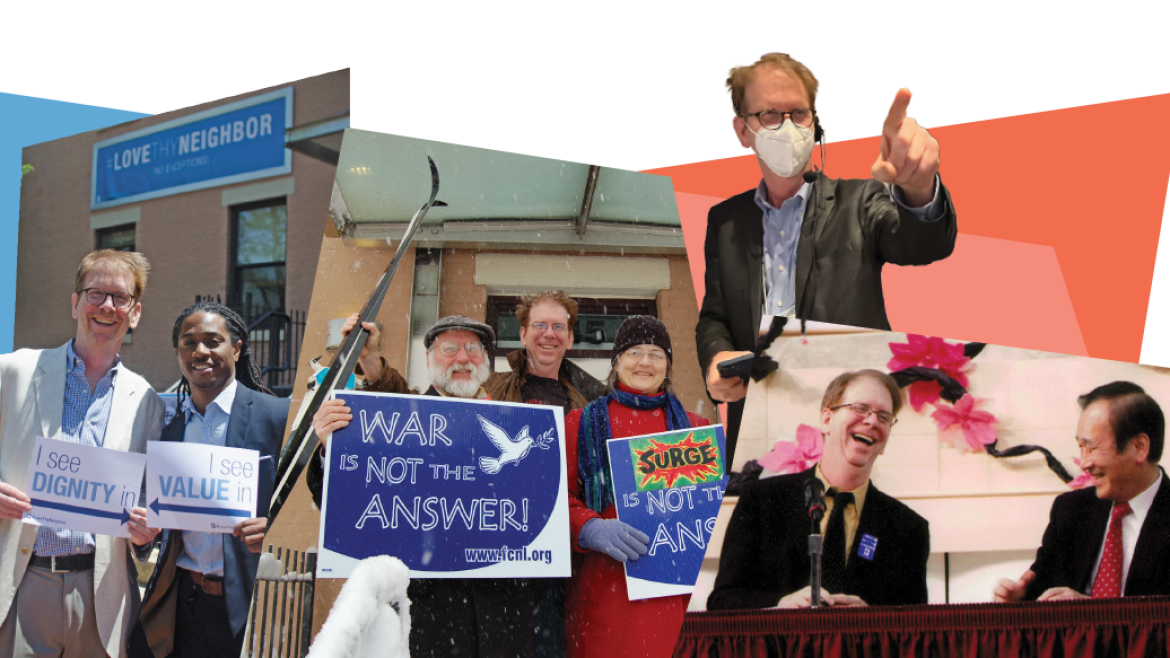 In 2022, the FCNL community has a big agenda: We are a lonely voice against expanding the war in Ukraine, a faith community calling for accountability for the crimes committed by people of faith and our government at Native American boarding schools, and advocates for government investments that focus on the people of color and poor communities that have been most impacted by climate change.

Our most important role today, however, may be in the way that we advocate and train thousands of people around the country to bring their own experiences, their faith, and their stories into Congressional offices around the country. Our staff and volunteers help thousands of people find the courage, the resilience, and the mutual support to engage with members of Congress even in cases where they don’t agree.

In a world that seems to be pulling apart rather than coming together, FCNL’s practice of advocacy today is as important as the policies we advocate for.

In a world that seems to be pulling apart rather than coming together, FCNL’s practice of advocacy today is as important as the policies we advocate for.

We advocate in this manner because of FCNL’s grounding in Quaker faith and practice. Approaching each other, our neighbors, and members of Congress with both a clear sense of the policy, we support and listen deeply as we try to understand the perspective of the other person in our conversations.

What I didn’t know when I started at FCNL 17 years ago, was how powerful this approach to advocacy could be. In working with Yemeni Americans, our own network, and others to end U.S. support for the Saudi war in Yemen, we have developed relationships of trust with members of Congress who are appalled at the famine in that country and concerned about the U.S. role in maintaining the aircraft that drop bombs on one of the most impoverished countries in the world.

The result, in 2019, was the first successful passage of a bipartisan resolution in the House and the Senate invoking the War Powers Act.

Although that resolution was vetoed by then-President Donald Trump, the peace negotiators have told us that Congressional pressure was a factor in the movement toward peace that resulted in a ceasefire in 2022.

But it is not enough to be against war. Our FCNL community has successfully worked to persuade the U.S. government to invest in preventing wars and to change the structure of the State Department to provide more incentives to diplomats to act now to prevent a war five years in the future.

These investments don’t prevent all wars, and they certainly seem thin gruel for local people in Somalia, Yemen, or even Ukraine. Yet we’re also beginning to see how the focus of 10 or 12 separate US government agencies on the task of preventing atrocities and violence can begin to show results.

This work takes patience, steady financial support from thousands of people and it requires a long-term commitment to change that isn’t derailed if the results don’t show up in the headlines.

The policy results are visible in the legislation expanding the rights of Native Americans to address violence against women, the successes in pushing back against new types of nuclear weapons, and the investments our government is beginning to make in addressing how we care for and nourish children and families.

Quakers founded FCNL nearly 80 years ago to change federal policy. Today, against many odds we are continuing to do that.
I am most moved by the diverse communities of young people FCNL is engaging across the country. Justifiably impatient and mad at the failures of our society on so many levels, and at the inaction of generations of political leaders, FCNL is working with, learning from, and training thousands of young people to talk to their neighbors, engage their members of Congress and bring their voices into the political space in this country.
They are creating the world we seek.

After 17 years at FCNL, Jim Cason is stepping down as associate general secretary for policy and advocacy. Throughout his FCNL career, Jim has worn many hats, including leading such teams as development, communications, lobbying, policy, information technology, finance and human resources, and as interim general secretary.

We are grateful for all his contributions to FCNL and hold him in the Light as he returns to his first love, journalism.