At times it seems like the United States’ only answer to war is more war. As the world’s greatest superpower, the United States has become accustomed to getting its way through coercion, intimidation, and the use of force. Domination, not cooperation, seems to be the only language in which Congress and the executive branch are fluent.

Yet this approach to the world has proven itself to be immoral, ineffective, and unwise. The costs of 20 years of war are staggering: over 929,000 people have been killed; 38 million have been forced to flee their homes; and U.S. taxpayers have spent over $8 trillion, with no clear or lasting victories—let alone sustainable peace—achieved.

Yet this approach to the world has proven itself to be immoral, ineffective, and unwise.

That’s not to mention the estimated 15 million people globally who have died from the COVID-19 pandemic. Many or most of whom might have been saved if governments had put people first in their budget and policy decisions.

It doesn’t need to be this way. We may not be able to stop aggressors like Vladimir Putin from undertaking illegal and unjustifiable invasions, but we can help create an environment in which such actions are less likely, civilians are better protected, and diplomacy is prioritized.

Straightforward steps such as ratifying international treaties, participating responsibly and constructively in multilateral institutions, and refraining from actions likely to be perceived as hostile or threatening can help to build trust and confidence in U.S. intentions and actions.

Providing humanitarian and refugee assistance is important, but it must be accompanied by the lifting of broad-based sanctions that make life more difficult for impact innocent and vulnerable populations.

Rallying others to our cause is something that U.S. diplomats excel at, but they’ve placed much less emphasis on bringing parties to the bargaining table and ensuring that women; youth; and ethnic, racial, and religious minorities are represented in negotiations. 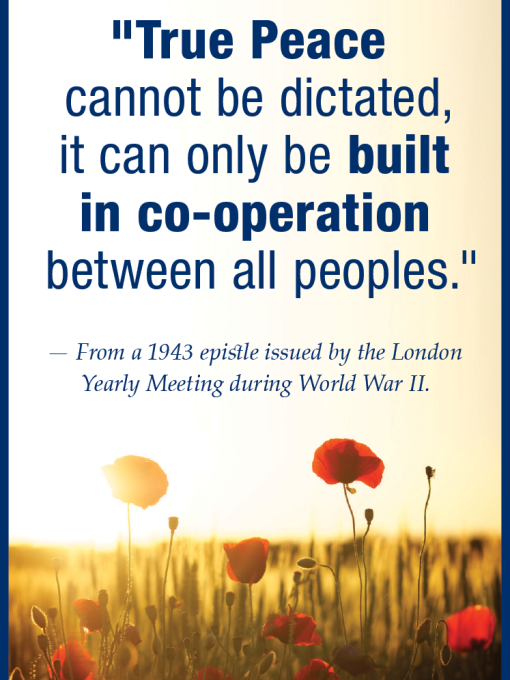 All these steps, and many more, are the work of global peacebuilding. Peacebuilding includes providing diplomatic, legal, and material assistance for nonviolent civilian resisters, peace activists, human rights defenders, and civic leaders without compromising their independence and autonomy.

At heart, all these efforts are designed to nonviolently repair injustice and transform the structural conditions that generate armed conflict.

These are the efforts that FCNL’s lobbyists work every day to support, with the help of a broad network of coalition partners and grassroots advocates.

Through the Prevention and Protection Working Group (PPWG), a coalition of about 250 groups that FCNL coordinates, we identify countries at high risk of conflict, genocide, and mass atrocities and propose steps to reduce those risks and prevent harm to civilians.

The PPWG holds regular meetings with a wide variety of administration officials to bring their attention to these situations, improve their understanding of what’s happening on the ground, and make recommendations for policy change.
The PPWG also briefs Congress on its country assessments to help build pressure for early and effective action to prevent conflict and atrocities.

FCNL’s peacebuilding program bolsters this work by lobbying Congress to provide robust funding for specific budget accounts, such as the Complex Crisis Fund, that support conflict prevention and response.

Each year, we coordinate a letter to members of the appropriations committees specifying the desired funding levels for each account and explaining their importance. This year, 35 groups signed the letter, and many of them join our lobby meetings to discuss the request with key House and Senate staffers.

At heart, all these efforts are designed to nonviolently repair injustice and transform the structural conditions that generate armed conflict.

Adequate funding for these accounts is necessary, but not sufficient without policies and laws in place to prioritize peace. FCNL is also working to overturn a congressionally imposed restriction on funds for UN peacekeeping, to reverse a Trump-era policy allowing the use of landmines, and to ensure that all the requirements of the Elie Wiesel Genocide and Atrocities Prevention Act (P.L. 115-441) and the Global Fragility Act (P.L. 116-94) are met.

All too often, policymakers wait until violence erupts to respond—and when they do, they prioritize military power as the only resource. For a far lower cost, with far less harm and often greater impact, the United States can invest in early action to prevent genocide, atrocities, and armed conflict; and in nonviolent action, to protect civilians and promote diplomatic solutions during times of crisis.

Former Senior Strategist and Legislative Director for Foreign Policy
Diana Ohlbaum directed FCNL’s foreign policy lobbying team and leads an effort to replace the current U.S. foreign policy paradigm of military domination and national superiority with a more ethical and effective one based on cooperation and mutual respect.