In this report, authors Salih Booker and Diana Ohlbaum analyze the racism and militarism at the core of U.S. foreign policy and offer a roadmap for progress toward a more sustainable, just, and peaceful world.

The prevailing, militaristic conception of “national security” is steeped in racism and perpetuates white supremacy. The Racism-Militarism Paradigm is a way of looking at the world, widely shared among the U.S. policymaking community and much of the public, that arises from a largely unacknowledged doctrine of white supremacy and the necessity of using violence to uphold it. This paradigm establishes a rigid hierarchy, based on race, that values white lives more than any other—at home and abroad. It embraces militarism as the most effective mechanism to guarantee this ordering of society and the world.

The U.S. quest for global military supremacy causes immense harm at home and abroad, particularly to people of color. The policies that emanate from this paradigm rob us of economic resources, corrupt our political system, endanger our lives, and offend our most fundamental moral values. They perpetuate a system that discriminates against, disempowers, disrespects, dehumanizes, and brutalizes Black and brown people and other communities of color at home and abroad. Continuing the U.S. quest for global military domination not only harms the people of other countries and the earth we share, but also makes the vast majority of Americans less secure.

Racism and militarism are deeply embedded in the U.S. economy. The number and quality of jobs tied to the military-industrial-carceral complex, the corporate profits extracted from it, and the dependence on it of so many other sectors—oil, gas, and extractive industries; media, think tanks, and universities; lobbyists and Congress—all make the disentanglement extremely difficult. Racialized wealth and income gaps, regressive tax systems, and the deleterious effect of money in politics all perpetuate the status quo.

Political, legal, and constitutional structures keep the current paradigm entrenched. Unequal representation of Americans in Congress and exclusion from political decision making—through the lack of voting representation for the District of Columbia, the denial of self-determination for the people of Puerto Rico and U.S. territories, and the expanding avenues of voter suppression and gerrymandering—among other measures—keeps Black, Indigenous, and other people of color from exercising their rights and power. Antidemocratic institutions such as the Senate—which disproportionately benefits small, rural, less-diverse states—and the Electoral College—which has twice in the last five elections resulted in a president who lost the popular vote—must be significantly reformed or abolished. The arcane Senate rule known as the filibuster only amplifies the power of a small minority to prevent all Americans from exercising their legal and constitutional rights. And the Supreme Court now has a majority of justices appointed by presidents who lost the majority of the electorate, confirmed by a Senate whose members represented a minority of the American people. 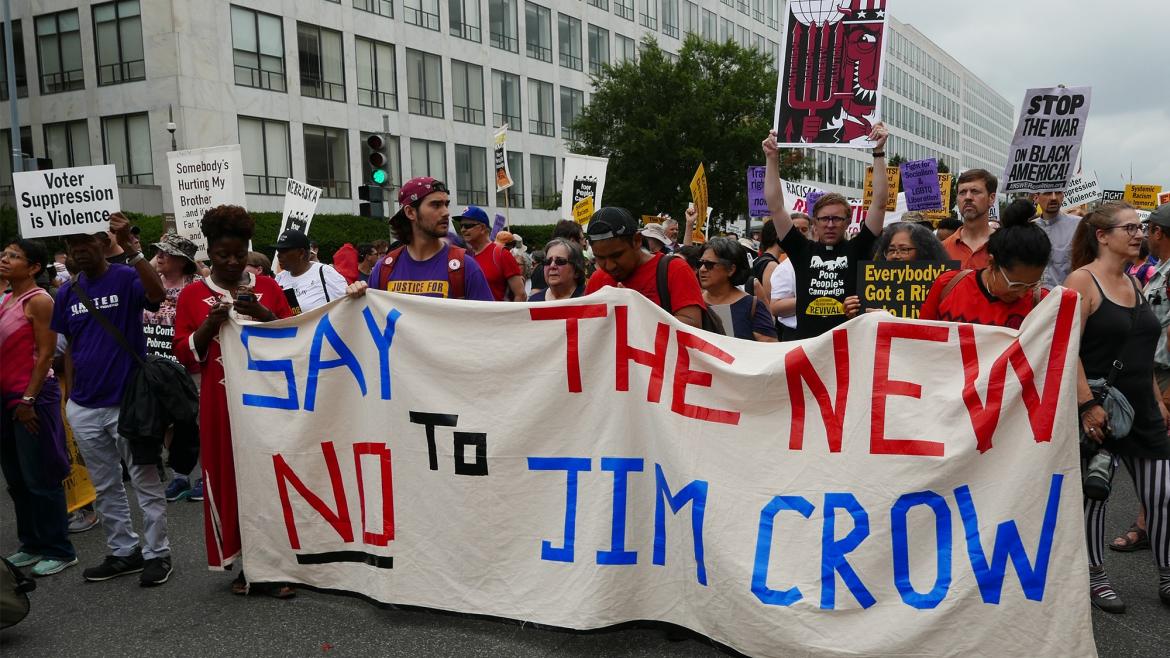 An array of foundational myths undergirds America’s addiction to war and anti-Black racism. American political culture celebrates the nation’s virtues while demonstrating collective amnesia about its sins. Particularly, but certainly not exclusively in the foreign policy and national security sphere, elites ignore, reject, and rationalize the enormous harms that the United States has caused through its history of slavery, genocide, and imperial expansion. Such whitewashing is possible because of a widespread, but largely unacknowledged, belief in the racial superiority of whites and their entitlement, exceptionalism, and indispensability. The narrow interests of wealthy and powerful white men are mythologized and legitimized as the “national security interests” of the United States. This is then used to justify global military domination and economic exploitation by the United States, bolstered by the myth that violence is both necessary and effective as a way of advancing those interests. While acceptance of these myths is widespread, it is largely unconscious. The paradigm is so pervasive throughout U.S. society that it masquerades as objective truth, blinding most Americans and their leaders to its origins and purpose.

Only a mass movement for change, uniting a wide variety of organizations and activists, will be able to overcome these obstacles. To peacefully and democratically dismantle this paradigm, we must establish a compelling alternative vision of the U.S. role in the world. We must build a paradigm designed to repudiate racism and militarism that is based on principles of justice, peace, equality, rights, dignity, shared wealth, and sustainability. The objectives of U.S. foreign policy must be to promote the social, political, economic, and physical well-being of all people.

Dismantling entrenched racism and militarism—and the political and economic structures that reflect and reinforce them—will require new ways of working together. Systemic change will come not from a small group of elites or political insiders who revise policies, but from broad grassroots movements that fundamentally shift the dynamics of power. It is these movements that provide the truth-telling necessary to educate a country willfully ignorant of its past and it is these movements that can force the political and economic changes necessary to create space for an urgently needed alternative role for the United States in the world.

Titles and organizational affiliations are provided for identification purposes only.

The FCNL Education Fund is a Quaker nonprofit that promotes civic engagement
to advance peace, justice, and environmental stewardship.