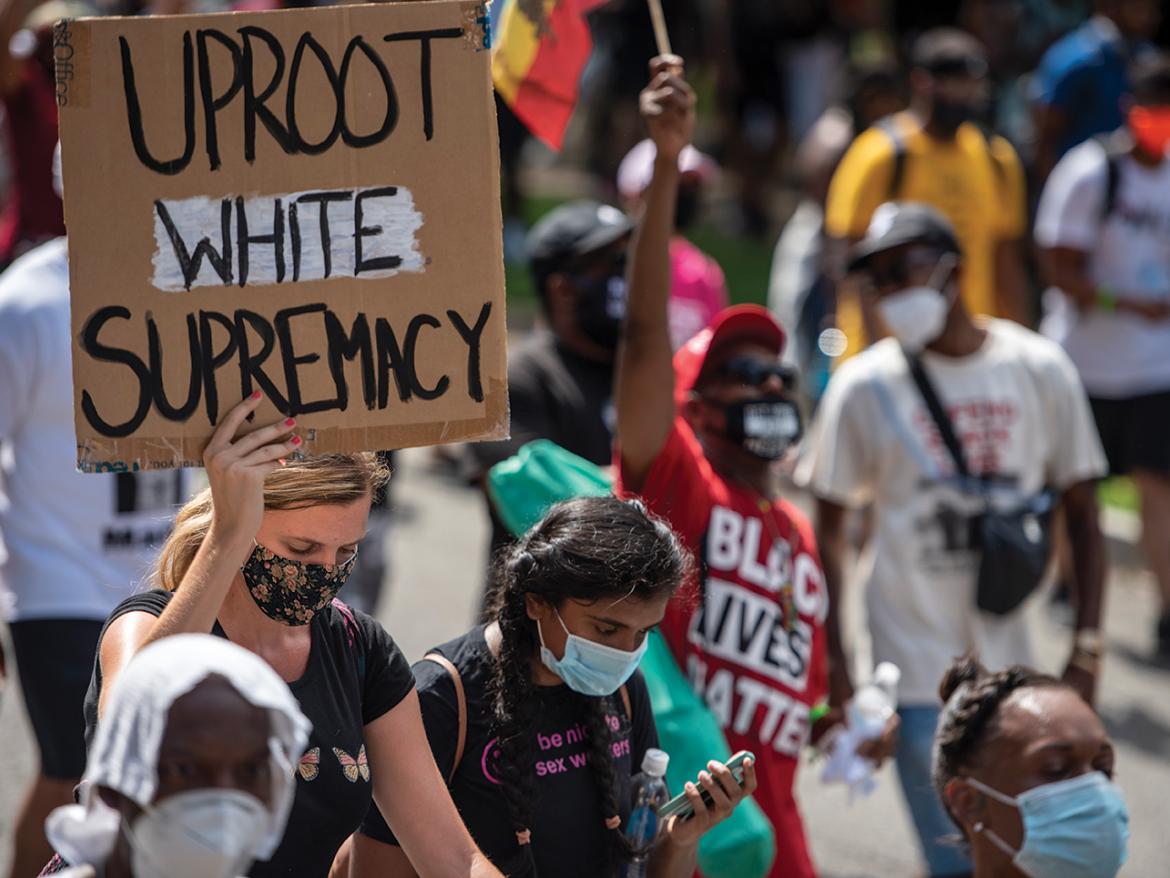 Last year’s Black-led uprisings in response to the murders of George Floyd, Breonna Taylor, and so many others, forced a reckoning with deep, systemic racism. The resulting conversation was incendiary, involving an interrogation of racism in U.S. history—including the long overdue toppling of Confederate statues—and calls to defund and abolish police departments.

It was in this context that a group of researchers, advocates, organizers, and scholars came together for the Dismantling Racism and Militarism Working Group (DRMWG). The group, which was convened by FCNL and the Center for International Policy, included people with a range of areas of focus—U.S. wars, the oppression of immigrants, and economic inequality among them.

The group’s purpose was not only to identify linkages between these injustices, but to find the subterranean roots underlying the relationship between racism and militarism—and their countless outgrowths.

Despite the expansive national discussion about racism, there has been too little attention to the connections between racism and militarism.

The working group made an important intervention. Despite the expansive national discussion about racism, there has been too little attention to the connections between racism and militarism. This is especially true as it pertains to the many U.S. historic and contemporary wars. Indeed, perhaps the most prevalent critique of the militarization of U.S. police departments is that armored personnel carriers and officers in camouflage carrying automatic weapons are inappropriate for American cities.

This carries an acceptance—however tacit—that this kind of violence does belong in Afghanistan, Iraq, Palestine, and other places around the world where the U.S. wields military power directly or through allies. That notion is a perfect example of the intersection of racism and militarism.

The mainstream conversation’s failure to connect racism with the fullness of militarism is not accidental.

When Black Lives Matter protests raged across the country last year, then-president Trump floated the idea of deploying large numbers of troops to cities in response. His defense secretary, Mark Esper, vocally opposed the plan, along with a number of retired generals.

Seeing the crisis of credibility afflicting policing, these leaders made sure to prevent the image of the military from being contaminated in a national reckoning with racism by redrawing a hard line between the police and the military, between domestic and foreign policy.

The working group committed to months of critical discussion to identify the nature of the combination of racism and militarism­—why it is so strong—and pathways to ending it. The effort included organizers from groups like 350.org and the anti-war veterans organization Common Defense. It involved activists from projects like the Poor People’s Campaign and Black Alliance for Just Immigration. It also included analysts from places like the Costs of War Project, the Institute for Policy Studies, and Justice is Global.

Meeting bi-weekly from October 2020 through April 2021, participants were able to overcome the distance of gathering remotely. With expert facilitation, they got to know each other and dove deep, analytically, in ways that led to the growth in understanding of all involved.

Everyone involved and every organization represented in the effort are in the thick of anti-racist work and demilitarization. Members of the working group are taking the learning and richness from the gathering into all of their projects.

Moreover, the working group has produced a network of people with some shared understandings and working relationships. With the need for discussion and action to uproot racism and demilitarize only becoming more urgent, the Dismantling Racism and Militarism Working Group is an important contribution. Its full impact can only be gauged in the coming months and years.

Khury Petersen-Smith is the Michael Ratner Middle East Fellow at the Institute for Policy Studies. He participated in the Dismantling Racism and Militarism Working Group.