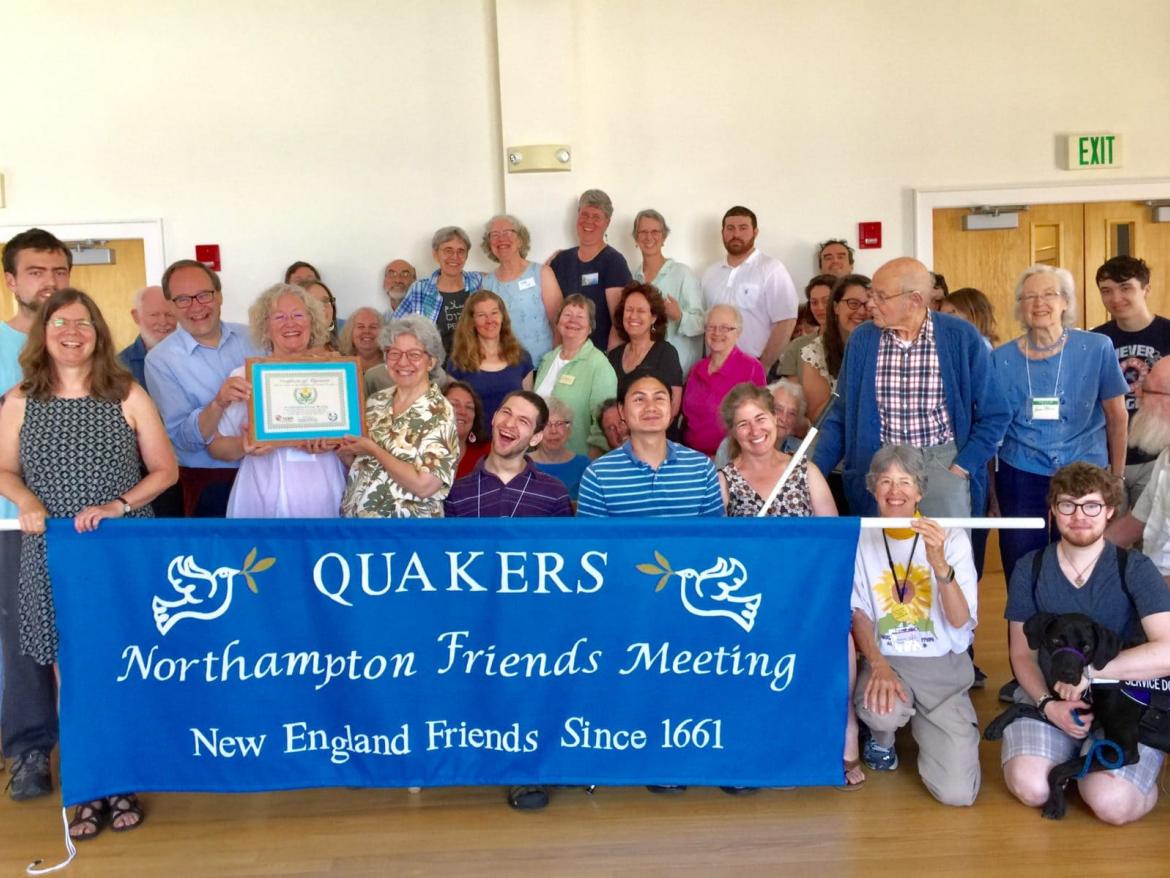 The Treaty on the Prohibition of Nuclear Weapons (TPNW), adopted in 2017 and entered into force this year, is a landmark international agreement. This pact comprehensively bans nuclear weapons, with the ultimate intention of eliminating them entirely.

There are 54 countries that have ratified the treaty. The United States, notably, is not among the signatories. From the start of negotiations, the United States made it clear that it had no interest in relinquishing its grip over nuclear power anytime soon.

For Quakers, this was a moral error with devastating repercussions. Instead of sitting by quietly, Northampton Friends Meeting in Massachusetts decided to do something about it.

In the fall of 2017, as then-clerk Marcianna Caplis recalls, Friend Timmon Wallis approached the meeting with an idea: With some work, Northampton could become the first faith community in the United States to come into compliance with the Nuclear Ban Treaty.

“We’ve always said that war is not the answer, so what are we doing to make sure that we’re working towards that?”

Almost immediately, the idea had widespread support. “It felt extremely natural,” said Caplis. “We’re not a nation-state, but we can still examine our own complicity with nuclear weapons. We’ve always said that war is not the answer, so what are we doing to make sure that we’re working towards that?”

A working group was quickly formed, and opportunities for compliance quickly emerged. “We didn’t want to have any involvement with businesses that were investing in nuclear weapons, [so] we just explored everything,” said Caplis.

After some investigating, the meeting found that their bank held securities in the nuclear industry. So, after extensive communications with the bank, they switched to another. Friends even dug into the technology they were using.

No step was too small. They found out, for instance, that two of their thermostats were made by Honeywell, which also makes components for nuclear weapons. So, plans were made to find new thermostats.

Northampton Friends Meeting also spread their message beyond the walls of the meetinghouse. They drafted a letter outlining their intention to come into compliance and sent it out to local faith communities in case they wanted to follow suit. They also decided to give Timmon Wallis and his wife, Vicki Elson, a traveling minute to spread the word to other meetings and formed a support group to elder their work.

On June 17, the meeting was given a physical affirmation of their efforts: NuclearBan.US, an organization committed to using the Nuclear Treaty Ban to educate and mobilize people across the United States, sent Northampton Friends Meeting a signed certificate attesting that they had come into alignment with the treaty.

For other faith communities hoping to follow in their footsteps, Caplis has the following advice: “Don’t get overwhelmed with specifics. The places to look mostly are your investments, so start your quiet research there.”

Caplis also emphasized that Quakers have a particularly important role to play in spreading the word of nuclear disarmament. “[Friends] are usually very restrained, and there’s nothing wrong with that. But I think maybe it’s time for us to not be so restrained.”

“It’s pretty simple,” she continued. “We’re not in favor of war and nuclear weapons. So, we should do everything we can to make sure we’re not supporting them.”

The Gen. Milley Revelations Point to a Much Larger Problem