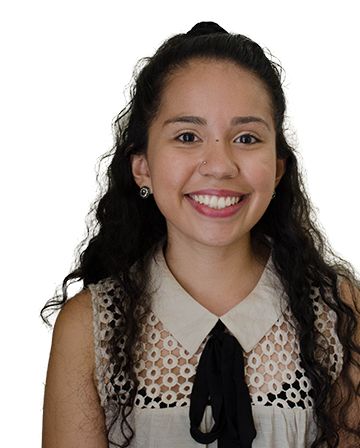 As the Young Adult Advocacy Coordinator, Larissa Gil Sanhueza focuses on developing and training young adult advocates around the country. Specifically, she manages the Advocacy Corps program, a group of 20 young adult organizers who mobilize their communities around one legislative issue every year. Larissa also oversees recruitment for Spring Lobby Weekend, a four day lobbying and educational event that brings together 500 young people from around the country.

Larissa graduated from the Pennsylvania State University in 2018. As a student, Larissa was involved with the Mock Trial Association, student government, and Planned Parenthood. Before working at FCNL, Larissa served as a fellow in the Pennsylvania House of Representatives. In her capacity as a House Fellow, she wrote a bill clarifying the guidelines used in child custody cases in which one of the parents has committed a sexually violent crime.

Background Yes AND Vote on November 3! ›

Amid the political turmoil, racial tensions, and global pandemic, it is difficult to know what lies ahead. For us young adults, this uncertainty makes it feel almost impossible to imagine what a November election will look like.

Everyone is talking about the upcoming elections, and for good reason: We have the opportunity to elect lawmakers who will support us in Congress.

Update Nothing Can Stop the Advocacy of Young Adults ›

When it became clear that this year’s cohort of Advocacy Corps organizers would have to be trained online, I was nervous. The Washington Summer Intensive training is usually 10 full days of learning and growing as a group. How was this going to translate in a virtual setting?

Update Five Reasons You and Your Friends Should Vote ›

Do you remember the 2016 election? With two candidates that had seemingly nothing in common and almost opposite policies, there was a lot at stake.

It has been one week since I said goodbye to the 20 young adult organizers who make up FCNL’s Advocacy Corps. After 10 days of training in Washington, DC, they are now in their communities organizing on a tragically relevant issue: gun violence.

One of FCNL's signature programs continues to grow with 20 young adults joining the 2018-2019 Advocacy Corps. This diverse group will organize their local communities in 16 states to reduce gun violence.

Spring Lobby Weekend is right around the corner! More than 450 young leaders will be joining us in Washington, D.C. for four days of learning, sharing, and lobbying. I. AM. EXCITED. Ask my coworkers – this is all I have been talking about for months.