In September 2021, U.S. President Joe Biden told the United Nations, “I stand here today, for the first time in 20 years, with the United States not at war. We’ve turned the page.”

Unfortunately, this was not true. Although the president withdrew U.S. ground troops from Afghanistan, he made it clear that air and drone strikes would remain an option for dealing with “any resurgent terrorist challenge emerging or emanating from Afghanistan.”

It is simply not possible through the use of armed force to eliminate armed groups who engage in terrorism.

From 2018 to 2020, the United States conducted militarized counterterrorism operations in 85 countries around the world, including air and drone strikes in at least seven countries. This was up from 80 countries in the prior two years. Most of these operations are conducted with limited congressional oversight and little public knowledge.

Rather than bringing an end to our forever wars, the Biden administration has continued to conduct lethal operations—employing the euphemistic term “over the horizon” strikes—and to prioritize and promote around the world a militarized approach to counterterrorism.

The Friends Committee on National Legislation (FCNL) believes the U.S. War on Terror—the use of war and other military means to defeat terrorist groups—is based on a flawed proposition. It is simply not possible through the use of armed force to eliminate armed groups who engage in terrorism. Indeed, evidence shows that only 7% of terrorist groups have been “quelled by a military effort.”

Rather, two decades of a militarized approach to terrorism has caused almost incalculable harm, both at home and abroad. It has killed and injured hundreds of thousands of innocent civilians, most of them Black, brown, and/or Muslim; displaced millions and put them at increased risk of malnutrition, disease, and exploitation; caused severe environmental destruction and exacerbated the climate crisis; and cost U.S. taxpayers over $8 trillion.

These results were both predictable and preventable. We write this brief to provide details of how the United States failed to achieve the goals for the so-called War on Terror and to explain the reasons why.

Download “The Failures of the War on Terror: Issue Brief”

FCNL is a national, nonpartisan Quaker organization that lobbies Congress for peace, justice, and environmental stewardship. Our advocacy is driven by the Quaker belief in the inherent dignity and worth of each person and is carried out by our grassroots network and registered lobbyists on Capitol Hill. We seek a world free of war and the threat of war and a society with equity and justice for all.

Program Associate, Militarism & Human Rights
Julia Gledhill served as the program associate for militarism and human rights from 2020-2021. She advocates for a U.S. foreign policy centered on diplomacy and human security. 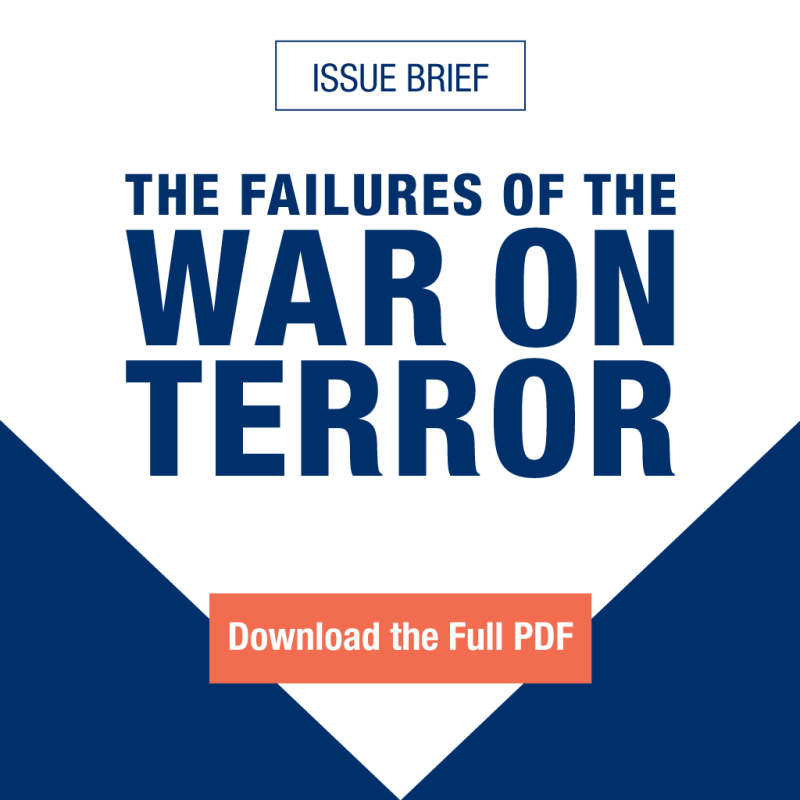 FCNL is a Quaker nonprofit that promotes civic engagement to advance peace, justice, and environmental stewardship.