New FCNL Bill Analysis for Environmental Justice for All Act

For decades, large numbers of fossil fuel infrastructure and hazardous waste incinerators have been built in and near communities of color and low-income communities. The Environmental Justice for All Act (S. 872/H.R. 2021), re-introduced earlier this Congress and sponsored by Sen. Tammy Duckworth (IL) and Rep. Raúl Grijalva (AZ-3), is a much-needed response to this history of environmental injustice.

Among its features, the Environmental Justice for All Act will strengthen existing laws, define the role of federal agencies in advancing environmental justice, improve federal research and data, and lay the groundwork for a just transition that leaves no one behind. Learn more in our newest bill analysis.

In northern Minnesota, the energy company Enbridge has been draining wild rice marshes and rivers during construction of the Line 3 pipeline. The company has also begun drilling under the Mississippi River without mandated tribal oversight.

In June, Minnesota Public Radio reported that Enbridge had received an amended permit from the Minnesota Department of Natural Resources allowing them to pump nearly 10 times as much water from the ground to build the pipeline than their permits originally allowed. Indigenous leaders are concerned that this project threatens vital water resources, especially during an ongoing statewide drought.

A number of celebrities, including Leonardo DiCaprio, Mark Ruffalo, and Joaquin Phoenix, have joined the opposition to Line 3. In a letter sent to President Biden on July 7, over 200 celebrities, Democratic donors, and environmental leaders highlighted the need for climate justice. They called the pipeline construction “an unfolding human rights crisis.” FCNL continues to call on the Biden administration to suspend construction.

In 2021, FCNL constituents have sent 1,118 messages to Congress in support of environmental justice.

Conservative Climate Caucus Gains Momentum
Led by Rep. John Curtis (UT-3), 66 House Republicans have joined the newly created Conservative Climate Caucus. It signals a growing need and desire among Republicans to publicly engage with climate change. Among other tasks, the group will help educate lawmakers on climate science and explore the more localized impacts of the climate crisis.

Sens. Whitehouse and Schatz Introduce Save Our Futures Act
On June 16, Sens. Sheldon Whitehouse (RI) and Brian Schatz (HI) introduced the Save Our Futures Act, a comprehensive carbon pricing bill that includes key environmental justice components. The bill would place a $54-per-ton fee on carbon emissions starting in 2023, and price other air pollutants as well. It would also redirect the revenue back to low- and middle-income families, invest in communities impacted by environmental injustice, and provide transition assistance to fossil fuel-dependent communities.

Heat Wave Underscores Reality of the Climate Crisis
Cities and states across the Pacific Northwest repeatedly broke heat records last week during an unprecedented heatwave. The temperature in Portland, Oregon hit 116 degrees on June 29, and the death toll in Oregon has risen to 116 in the days following the crisis, making it the second-most lethal disaster event in state history. The record-breaking heat also melted power cables, brought public transportation to a halt, and buckled roads, underscoring the intersection between the climate crisis and infrastructure.

Constituent Spotlight
On June 9, members of the FCNL community joined 102 faith leaders outside of the Capitol in calling for 100% clean energy. The event focused on lifting up a moral call for strong climate action, as outlined in President Biden’s American Jobs Plan, including establishing a 100% clean energy standard by 2035. It was organized by Interfaith Power & Light, Dayenu, the Hip Hop Caucus, and the Chesapeake Climate Action Network Action Fund. 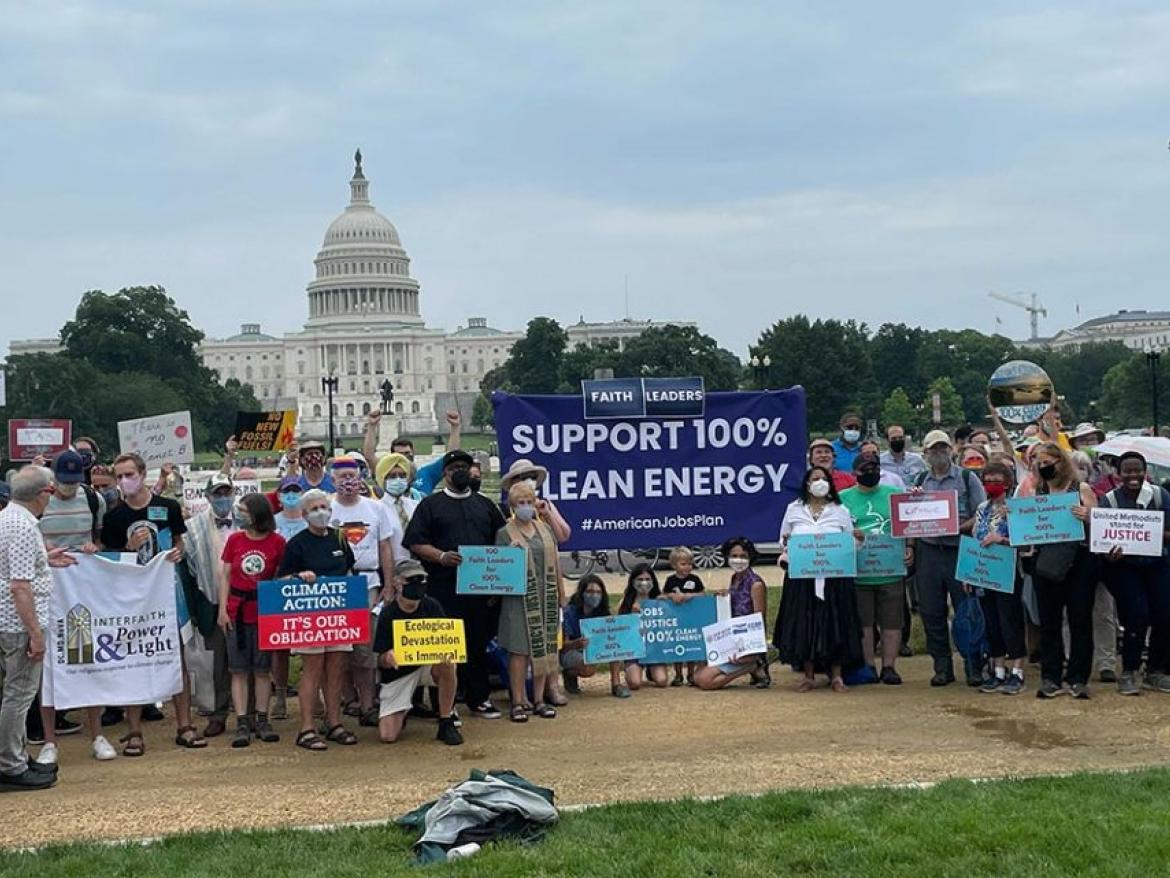