Grounded in Quaker principles of stewardship and the human dignity of all people, FCNL is working to advance environmental policies that will meaningfully address the climate crisis and move us towards right relationship with our communities and Earth.

We do so by advocating for policies that redress historic and ongoing environmental injustices; reduce greenhouse gas emissions and incentivize renewable energy; and provide opportunities for people and communities as we transition to a low-carbon economy. Strong climate policies offer an opportunity for the United States to address past injustices while investing in our collective future.

For decades, the placement of fossil fuel infrastructure in and near minority and low-income communities has created a significant and disproportionate environmental and health burden. To address this historic and ongoing environmental racism, we endorse the Environmental Justice for All Act (H.R. 2021), increased federal appropriations for environmental justice programs and initiatives, and legislation to close the heavy polluting peaker plants that constitute some of the dirtiest sources of energy in the US. 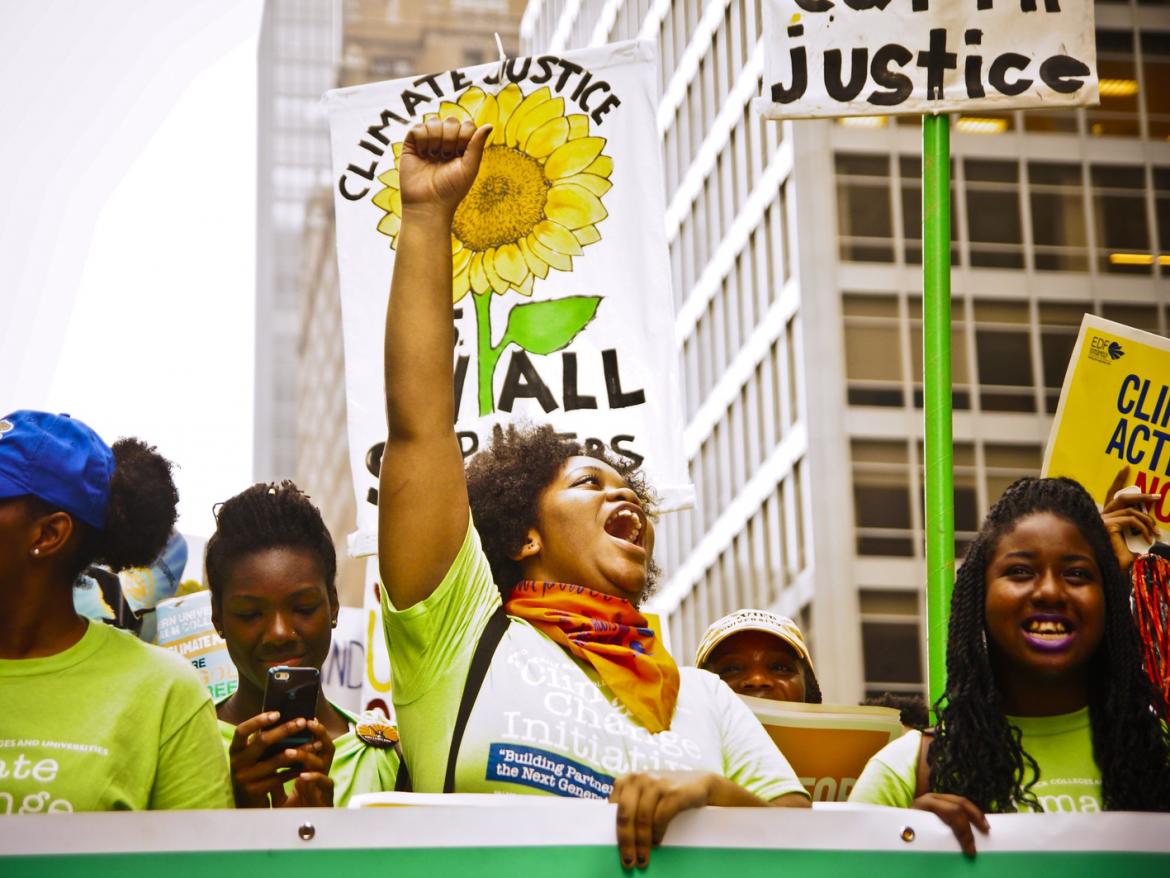 We also oppose the construction of new pipelines—like Dakota Access and Line 3—which disregard tribal sovereignty, worsen the crisis of missing and murdered Indigenous women, and have devastating environmental impacts. We also actively seek to raise up the voices of the local nonprofits and community organizations who have been on the frontlines of the struggle to advance environmental justice.

Promote Green Energy and Put a Price on Carbon

FCNL supports policies that facilitate the deployment and use of renewable energy and zero-emissions technology, which can provide jobs with good wages. Increasing our use of zero-emissions energy will also dramatically decrease pollution, bringing significant health benefits, including saving thousands of lives and avoiding tens of billions of dollars in health costs.

A price on carbon can support the rapid decarbonization of our economy. Enacting a meaningful carbon tax will incentivize businesses, entrepreneurs, and individuals to pursue and invest in low carbon alternatives. Any carbon price should be set high enough to drive emissions reductions and be paired with a border carbon adjustment. Much of the revenue from a carbon price should be returned to U.S. households and/or placed in a just transition fund to offset burdens on low-income families.

We can’t afford to leave anyone behind in this energy transition. FCNL advocates for policies that advance economic opportunity and social equity, especially for communities that have historically been fossil fuel hubs. A just transition must include funding for the cleanup of abandoned coal mines and Superfund sites and the implementation of job training, as outlined in the RECLAIM Act (H.R. 1733) and AML Reauthorization Act (H.R. 1734). This funding offers the opportunity to protect public health, create new economic hubs, and build resilient communities.

The World We Seek

The world we seek is one based on respect for nature, one where we all respect the Earth’s biodiversity as valuable in its own right.

The world we seek is one based on respect for nature, one where we all respect the Earth’s biodiversity as valuable in its own right.

It is a world where renewable and zero carbon energy powers an economy that offers opportunity  for everyone. It is a world where communities are part of a caring society that has learned resilience in the face of environmental, social, and economic disruption.

And it is one where no one is left behind because the rights and value of all people, including Indigenous and minority groups, are recognized. We believe that it is the moral responsibility of our nation to care for our neighbors and our common home, and to act as guardians of the inheritance of future generations.

Ideally, the necessary policies would garner broad support from both political parties. We recognize the decline in bipartisanship in the Congress for climate and many other issues. In the Quaker tradition, we will always listen to voices and ideas from across the political spectrum, and as an organization we will continue to do our part to encourage the parties to come together and bridge the political divide.

We live in a transformational era that calls for new ways of thinking and new policies that put people and the planet first; This is a time for statesmanship, not gamesmanship. We urge U.S. political leaders to support transformational investments that will address the climate crisis, protect the planet’s ecology, and fulfill our moral obligation to leave a habitable world for future generations.

June 2021: Inside the Greenhouse