On March 24, the Senate Rules Committee held a hearing on the For the People Act (S.1) to further examine how the bill would affect democracy in the United States. Now that committee members have heard from policy experts, election officials, and other stakeholders, the bill is one step closer to advancing to the Senate floor for a vote. The bill passed the House earlier in March.

The For The People Act is a comprehensive, sweeping package of democracy reforms that will expand and protect voting rights for all, end gerrymandering, get dark money out of politics, and restore transparency and accountability in our government.

If enacted, it would be the most significant voting rights and democracy reform in more than half a century.

If enacted, it would be the most significant voting rights and democracy reform bill in more than half a century, according to NYU’S Brennan Center for Justice. The bill would increase the overall political power of Black and Brown communities, whose voices continue to be suppressed under election laws across the nation.

At the hearing, Majority Leader Chuck Schumer (NY) highlighted the urgent need for the For the People Act by pointing to the wave of voter suppression bills being introduced in statehouses nationwide. Sen. Schumer called these bills an “existential threat to our democracy,” reminiscent of Jim Crow-era laws.

Meanwhile, other Senate Democrats spent much of the hearing correcting false and inflammatory claims about dangers surrounding the bill. Sen. Ted Cruz (TX), for instance, alleged the bill will allow “illegal aliens” and “criminals” to access the ballot box. This is not true—it is currently illegal for non-citizens to vote in elections, and that would remain the case under the For the People Act. And by expanding voting rights to people with felonies, the bill would extend the vote to individuals who have already served their sentences.

In response to claims that the For the People Act would create widespread chaos for democracy, Sen. Amy Klobuchar (MN), chair of the Senate Rules Committee, said:

I’ve been hearing the word ‘chaos’ tossed around. Well, let me tell you where chaos is. Chaos is…five hour, six hour lines in states like Arizona to vote; chaos is purging names of longtime voters from a voter list so they can’t go vote in states like Georgia; chaos is the state of Texas saying you can only have one drop-off box for votes and ballots in their state including huge counties like Harris County with nearly 5 million people. Chaos is forcing people in Wisconsin to stand in garage bags in the rain waiting in line, just to exercise their right to vote …

[W]hat this bill tries to do is simply make it easier for people to vote and take the best practices we’ve seen across the county and put it into law as we are allowed to do under the Constitution.

The need for the For the People Act couldn’t be more urgent. This year, hundreds of bills have been introduced in statehouses across the country seeking to suppress votes. These bills intentionally seek to silence the voices of the American people, particularly Black and brown voters, who voted in record numbers this past election cycle.

The Senate must pass the For the People Act, the provisions of which are popular among the majority of Americans, no matter their political affiliation. Our democracy is too precious and fragile to wait any longer.

Urge your senators to support the For the People Act (S.1) and take action against voter suppression.

Program Assistant, Justice Reform & Election Integrity
Kameryn Point (Lumbee/Waccamaw Siouan) was the program assistant for criminal justice and election integrity for 2020-2021. In this role she lobbies for comprehensive justice reform, including the demilitarization of local police forces, required racial profiling and bias training for law enforcement, and an end to mass incarceration.

Give People the Vote

Momentum Building in Senate for Action on Voting Rights 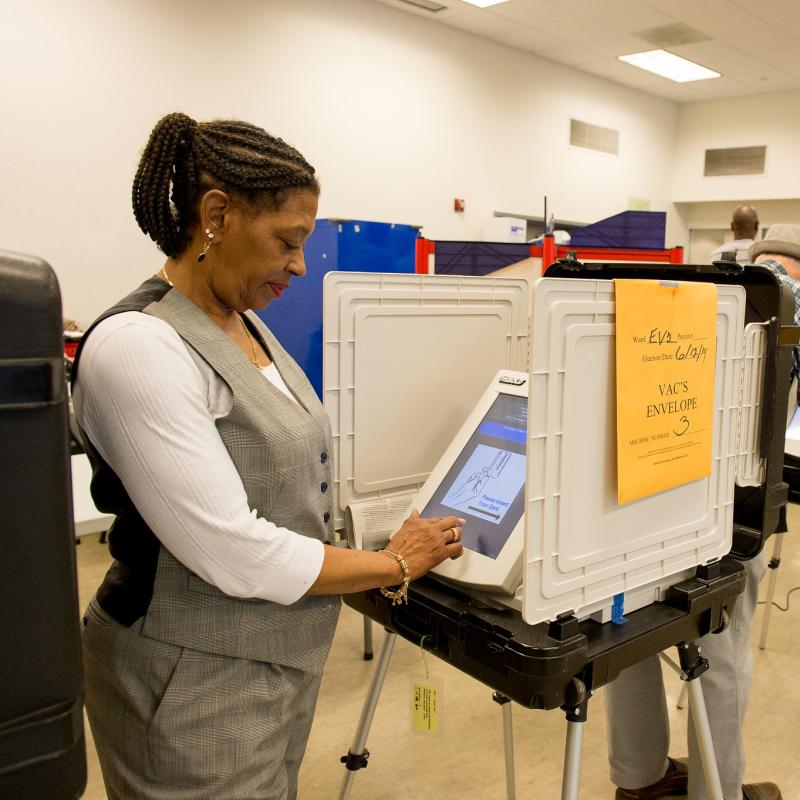 Quaker Lobby Applauds House Passage of For the People Act