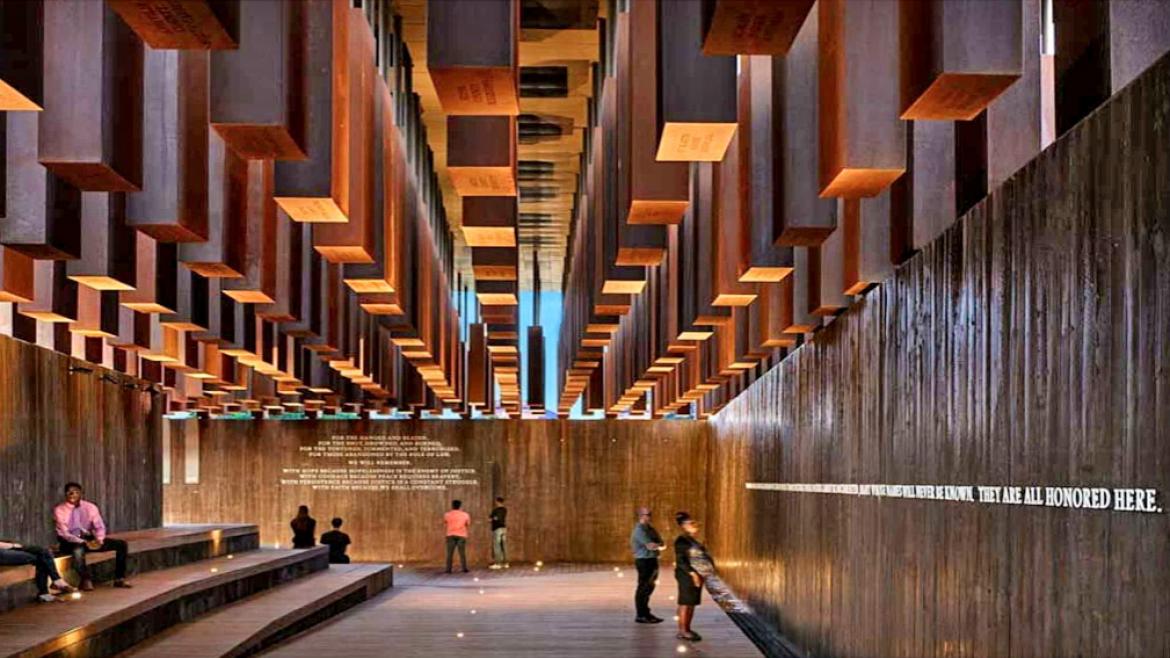 Attribution
The National Memorial for Peace and Justice / Ron Cogswell

Last week I visited the National Memorial for Peace and Justice and the Legacy Museum in Montgomery, AL.  Together, they memorialize the legacy of enslaved Black people, especially the victims of racial terror lynchings in the United States.

In establishing the memorial and the museum, the Equal Justice Initiative has created a profound testament to a shameful and violent history we have not fully acknowledged.

Inside the Legacy Museum, stories tell of the flourishing domestic slave trade in the early days of our country. The narratives and the data testify to the inhumanity of families ripped apart, the brutality to the bodies and minds of those enslaved for the benefit of white political and economic structures.

At the memorial, I saw this legacy and the breadth of the inhumanity through the moving and solemn memorial. On a sloping city block, the outdoor space is constructed with 800 steel beams representing the counties where racial terror lynchings happened. The beams are etched with the names of 4,084 people in 12 southern states and an additional 800 people in 15 additional states who were lynched.

It was not uncommon for lynchings to be public spectacles, with participation of many ordinary people, including the Ku Klux Klan who proudly displayed their hate. Growing up in Omaha, NE, I had never heard of the mob of thousands that demanded and watched the racial lynching of Will Brown in 1915 in my hometown, a public killing that attracted a crowd of 15,000 people.

As I walked through the National Memorial for Peace, I was shocked to see the “offenses” for which Black men, women, and children were lynched in the Jim Crow era.

As we watch the trial of Derek Chauvin for the killing George Floyd, I am not only outraged, I am motivated to persistently lobby for the elimination of the modern-day lynchings.

It is truly difficult to fathom the violence and terrorism that was allowed, even encouraged, during the Jim Crow era. It is equally difficult to recognize that we still don’t always see the injustice of police actions today against Black people as deadly, terrorizing, and inhumane. Or, that we don’t act to change these racial injustices.

As we watch the trial of Derek Chauvin for the killing George Floyd, I am not only outraged, I am motivated to persistently lobby for the elimination of the modern-day lynchings of hundreds of Black people.

FCNL and our partners have lobbied the House to pass the George Floyd Justice in Policing Act (H.R. 1280). While this bill will not cure police injustice, it will limit the unchecked power of police by banning the use of choke holds, instituting a national “necessary” standard for the use of lethal force, and ending the militarization of civilian police departments.

This is one form of racism that we can begin to address with federal legislation, and I encourage you to act—to press your senators to pass their version of the Justice in Policing Act.

As the museum complex in Montgomery reminds us, the legacy of enslaving Black people established by white supremacy as a systemic social and political norm is still very much alive today. We must all work to dismantle that system.