The militarization of police is a key factor in the policing crisis we face today. Congress has opportunities to reform the 1033 program this year and limit the Department of Defense’s practice of transferring surplus military grade equipment to local police departments.

While it is an uphill climb, we are seeing growing bipartisan support for police demilitarization in the form of two bipartisan votes during debate on the senate National Defense Authorization Act (NDAA), and passage of an amendment to the House defense spending bill.

Missed Opportunities in the NDAA

FCNL supported an amendment to the National Defense Authorization Act (NDAA) from Sen. Brian Schatz’s (HI). The proposal (S. Amdt. 2252) would impose strict limits on the 1033 program by banning the Department of Defense from transferring tear gas, armor-piercing firearms and ammunition, bayonets, grenade launchers and grenades, combat tracked vehicles, weaponized drones, and other offensive equipment to local law enforcement agencies. Sen. Schatz’s amendment would still allow the transfer of so called “defensive equipment” like bullet proof vests. It also included a clause to prevent any law enforcement agency which violates a community’s first amendment rights from receiving equipment through the 1033 program for five years.

Never before have so many Republican senators voted to demilitarize the police.

While this amendment failed to meet the 60-vote threshold necessary for adoption, for the first time a majority of senators supported the amendment with a vote 51-49. Four Republicans voted in favor or the amendment: Sens. Rand Paul (KY) and Lisa Murkowski (AK) were original cosponsors of the bill, and Sens. Steve Daines (MT) and Cory Gardner (CO) joined their colleagues in supporting the amendment.

Sen. Jim Inhofe (OK) introduced another, more limited amendment (S. Amdt. 2411), which would ban the transfer of bayonets, grenades, combat vehicles, and weaponized drones. Under these rules the Department of Defense would still be allowed to transfer armor piercing weapons and ammunition, stun and flashbang grenades, and tear gas launchers. This amendment also called for additional police training, but included no punishments for police departments that violate the rights of the communities they serve. The Inhofe amendment passed 90-10 and was adopted into the Senate NDAA bill.

Never before have so many Republican senators voted to demilitarize the police. Grassroots pressure in the face of police actions and public demonstrations are pushing more members of Congress to call for reining in police violence.

Another Chance in the Appropriations Process

While the House was debating the NDAA Rep. Hank Johnson (GA-04) proposed an amendment that would place restrictions similar to those in Sen. Schatz’s 1033 amendment to the Senate NDAA. Several national law enforcement groups opposed this amendment. This opposition lead to some moderate democrats coming out against the measure. The amendment was ruled out of order and was not taken up during the NDAA amendment process.

Thankfully, the process of debate during the defense appropriations bill yielded success. Rep. Johnson managed to include his 1033 reform bill as an amendment to the defense spending bill. Whether this measure will become law is uncertain—many steps remain in the appropriations process, which will not be completed for months.

In the meantime, FCNL will continue to press for limiting the 1033 program in the NDAA, spending bills, and in comprehensive policing reform bills, such as the Justice in Policing Act (H.R. 7120/S.3912). 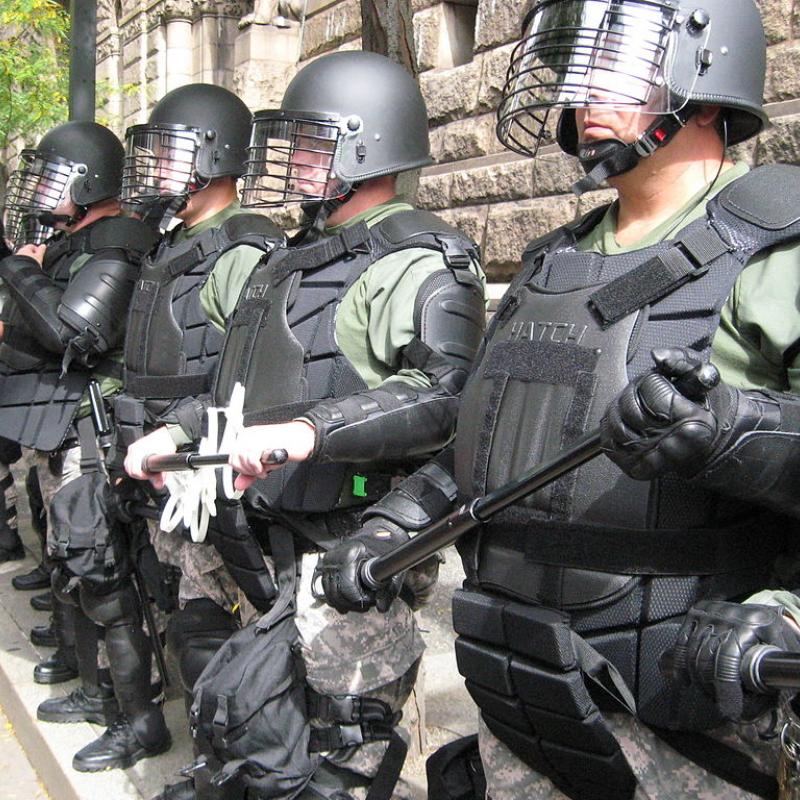 An Occupying Force in Black and Brown Communities