President Donald Trump is proposing massive increases in Pentagon spending. Lamenting that “we never win wars anymore,” the president sought a $30 billion increase in the Pentagon’s budget this year, to be followed by $54 billion more next year. In Congress, leaders on the Armed Services committees have proposed a $100 billion increase for next year.

These budget choices are paired in the president’s proposals with massive cuts in diplomacy, development, and other spending that protects our nation: in the State Department, the US Agency for International Development, the Environmental Protection Agency, nutrition and housing assistance, and other key institutions and programs. No matter what your advocacy priorities, they are under threat from the president’s proposal to grow the Pentagon budget. 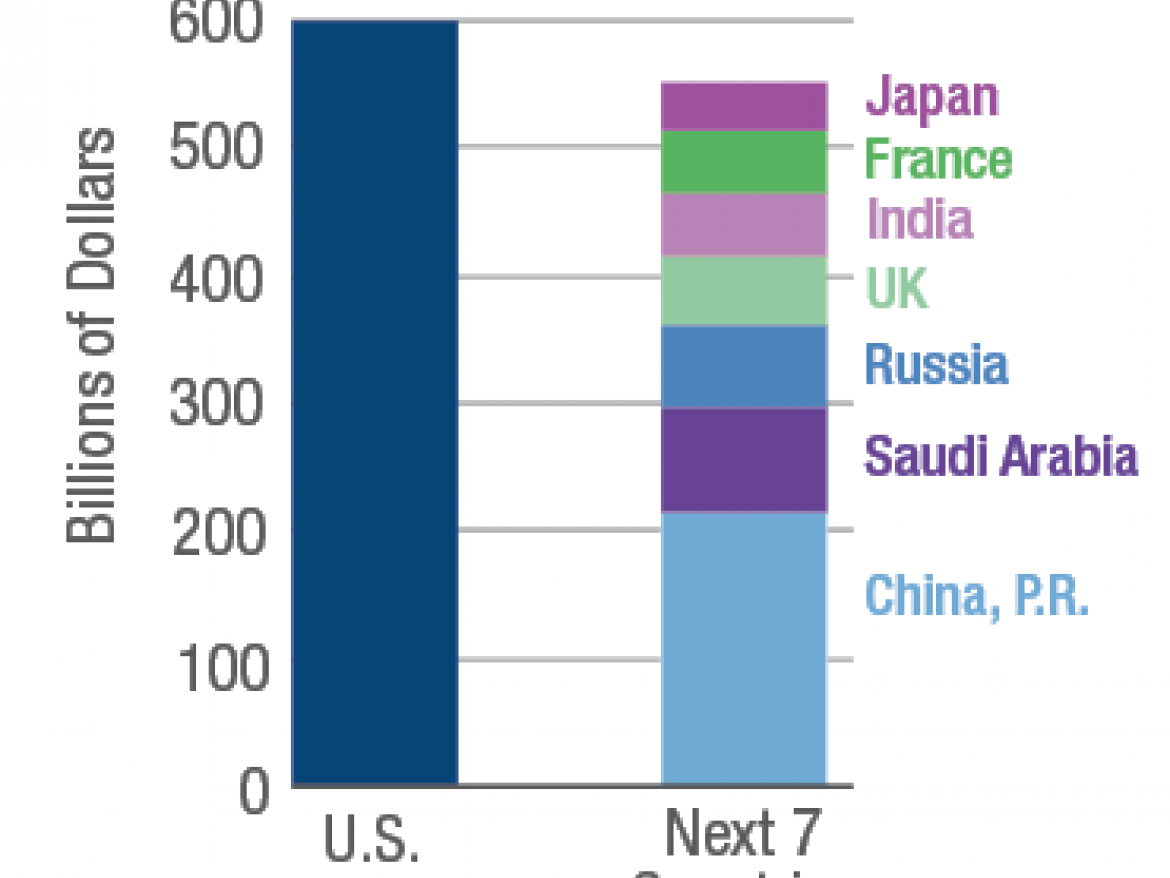 But the president doesn’t have the final word on how our nation spends its money. For this fiscal year, Congress approved about half the Pentagon budget increase that the president pushed for. This $15 billion Pentagon spending increase is still more than the entire budget for our diplomatic engagement across the world.

The Constitution stipulates that Congress determines how our nation spends its money, and lawmakers from both major political parties have said that the president’s overall budget priorities for next year are “dead on arrival.”

That is why our FCNL community is focusing on encouraging Congress to rein in out-of-control Pentagon spending. Our advocacy together will make a difference.

A Matter of Faith

As a Quaker-led community, we believe that peace is only possible through peaceful means that includes diplomacy, development, and peacebuilding. A foreign policy and economy increasingly dependent on the military drives up the likelihood of war.

As our legislative policy states, “Militarism has permeated our society, skewing our national budget toward support for the military and its attendant industries and forcing our local economies increasingly to depend on them. We oppose the militarization of U.S. foreign and domestic policy.”

But you don’t have to be a Quaker to see that war isn’t working. Fifteen years of bombings and war have not led to peace in Afghanistan, Iraq, or the countries that are a focus of U.S. military action. Bombing campaigns in Iraq, Afghanistan, and now Syria do nothing to address the reasons for violent extremism and do a great deal to radicalize the people being attacked. Doubling down on this same strategy will not produce a different outcome.

Too often in Congress, the desire to “do something” outweighs consideration of that “something’s” effectiveness. Violence only breeds more violence, yet violence is what the U.S. turns to time and again, despite the evidence that diplomacy and development work has the best chance of producing a long-term solution.

Further increasing the Pentagon’s budget is also fiscally irresponsible. Pentagon spending rose sharply after 9/11, increasing more than 40 percent in 10 years. Even after Congress instituted a cap on federal spending, the $600 billion Pentagon budget is still at or near the levels of the Cold War and Vietnam War. The U.S. spends more than three times what China spends on its military and more than ten times what Russia spends (see chart on pg. 1).

Congress also found ways to get around these budget caps for the Pentagon through special Overseas Contingency Operations (OCO) funding that was intended just for immediate, unbudgeted war operations — such as a surge of troops in Afghanistan. 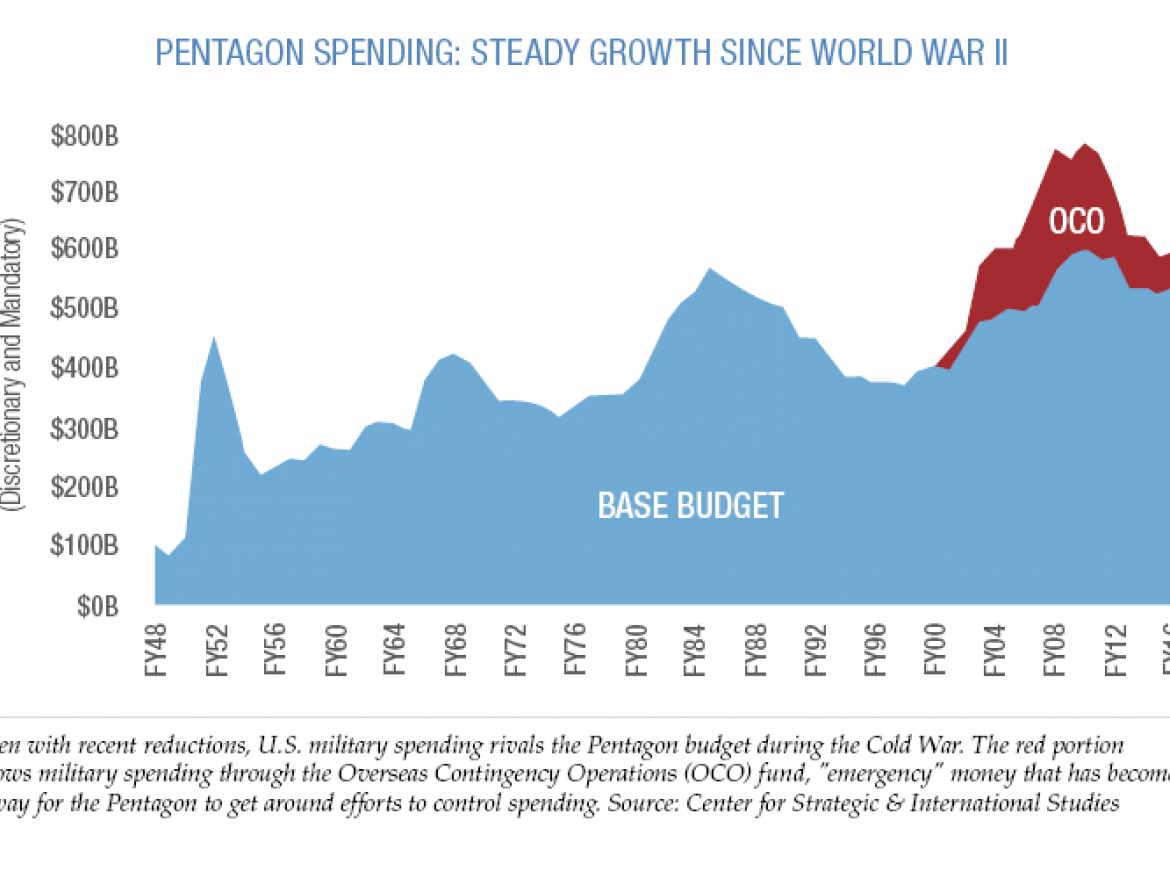 FCNL opposes any additional war funding, including through the OCO slush fund. As budget pressures have increased, the Pentagon has begun using this fund to pay for regular, non-war funding, providing a way for Congress to add up to $60 or $70 billion in spending beyond budget caps. While some of the funding goes to purposes we support — such as peacebuilding — we don’t believe the slush fund itself is a good idea.

The Pentagon budget now accounts for more than a quarter of all the money that Congress appropriates. A law passed in the early 1990s requires every government agency to be audited, but the Pentagon’s books still aren’t ready for this basic demonstration of fiscal accountability. Despite multiple extensions, many experts are skeptical that the Pentagon will be able to meet its September deadline for an audit.

This audit matters because of the well-documented waste, fraud, and abuse at the Pentagon, about which members of Congress from both major parties have raised concerns. Weapons systems regularly overrun their budgets or are rendered obsolete while still in development — from the billions-over-budget F-35 fighter jets to the Littoral combat ship that the Pentagon says it doesn’t need. The Pentagon’s own internal study found some $125 billion in potential savings over five years just in administrative and bureaucratic waste. 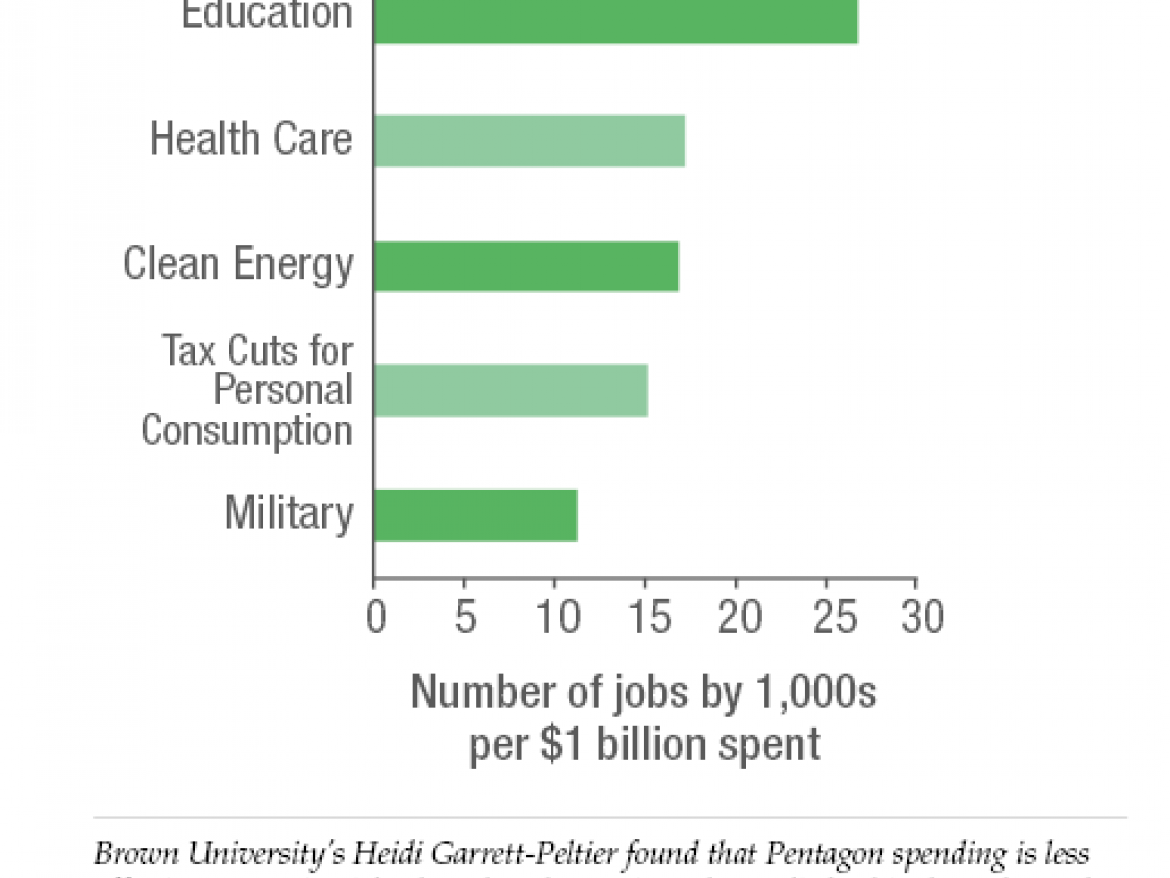 The Pentagon’s requests for money, supported by big business, are just part of the problem. Each year, Congress approves new money for Pentagon expenditures that the military hasn’t even requested because spending supports jobs in the military and defense industry. For example, while many of our nation’s military leaders question the need for a land-based ICBM missile system, senators from all three states where missile sites are located keep championing their usefulness. These senators are understandably concerned about jobs for their constituents. In fact, investment in the Pentagon is one of the least effective ways to create jobs.

The Pentagon itself has noted the excessive number of military bases around the country and around the world, but members of Congress routinely oppose any efforts to close bases in their states or districts. Sens. John McCain (AZ) and Jack Reed (RI) and Rep. Adam Smith (WA) have all said a new effort to establish a Base Realignment and Closure process (known in Congress as BRAC) should begin in 2019. Savings could amount to $2 billion a year or more.

We Can Halt Spending Increases

When we blindly hand over our country’s resources to the Pentagon while starving successful programs that care for our neighbors, the earth, and each other, we have lost sight of our priorities as a country. We also deprive our leaders and our country of the necessary tools to avoid war.

Our collective strength is not a tally of how many wars we win. It is a measure of the free, just, and equitable society we create. The administration’s efforts to add to an already bloated Pentagon budget move us farther away from creating that society. Together, we can stop these dangerous proposals.

Eight Wins for Peace in the House Annual Defense Bill

Congress Moves Closer Than Ever to Repealing Iraq War Authorization