As Congress plans their legislative goals for the year, we’ve heard certain elected leaders mention that they want to achieve “welfare reform” in 2018. While the term may sound harmless, in reality it acts as a vehicle for elected officials to strip benefits from those who rely on government programs like the Supplemental Nutrition Assistance Program (SNAP) and Medicaid.

SNAP and Medicaid are crucial components in helping millions of American individuals and families maintain a decent standard of living. SNAP helps low-income families put food on the table, and Medicaid provides health coverage to specific categories of low-income adults and children. Without programs like these, millions of people would have to make impossible decisions between feeding their families or going to see a doctor.

Historically, Medicaid has not had any sort of work requirements, whereas SNAP does. Because of this, the proposed work requirements for Medicaid are structured similarly to SNAP. This means that able bodied individuals between 19 and 64 years old would likely have to work 20 hours per week, although some states are considering volunteer work and/or community service instead of paid labor. Potential exemptions could include:

These requirements and exemptions would vary depending on the state. In addition to work requirements, Maine and Wisconsin have also proposed to establish time limits for Medicaid benefits similar to the limits found in SNAP.

Unlike Medicaid, SNAP already has work requirements and time limits in place. Able bodied adults without dependents must be engaged in work related activities for 20 hours per week in order to receive benefits for more than 3 months and less than 3 years. Exemptions include people who are:

If a recipient doesn’t meet the work requirement, then they lose their SNAP benefits with increasing penalties for each successive failure to meet the requirement.

Work requirements and time limits have a negative effect: 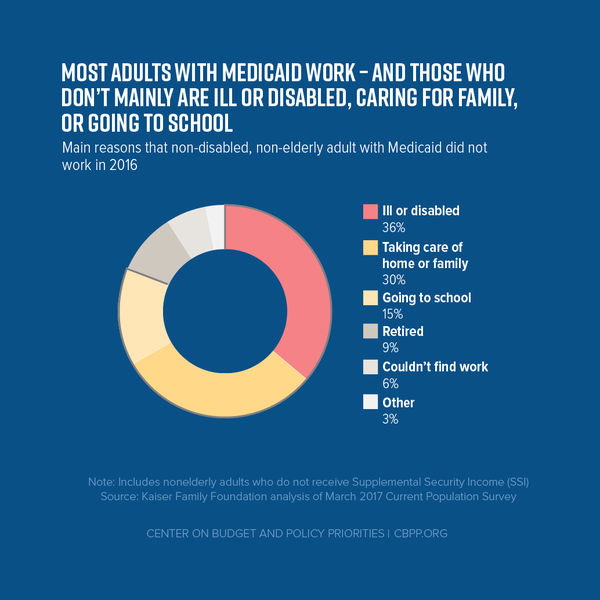 Work requirements target an already vulnerable population, and fail to help people move out of poverty:

Congressional leaders have repeatedly mentioned that this version of “welfare reform” will be their top priority for 2018. We need you to tell your members of Congress that work requirements don’t work, and that these recent efforts will only prevent benefits from going to those who need them the most. Our prophetic voice requires us to speak out for fairness and justice. Denying benefits from those who need them the most is immoral, and we cannot stand by while others are prevented from getting the help they need.

Please, write your representatives and tell them to reject work requirements for Medicaid.