The Frank LaMere Native American Presidential Forum was held on August 19-20 in Sioux City, Iowa. This historic event brought presidential candidates together to speak about their policy priorities for Indian Country, as they responded to questions from panels of tribal leaders and youths. 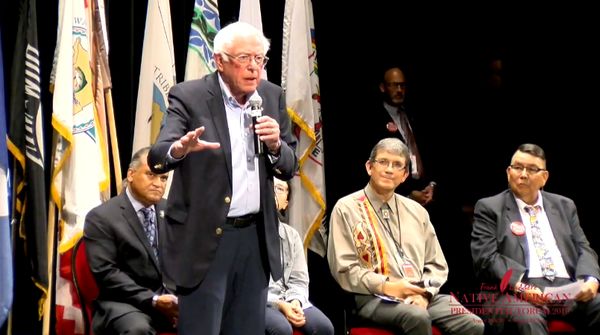 The organizers saw the forum as an opportunity for candidates to voice their commitment to Native American people. "It was a chance for candidates to demonstrate [that] they understand our issues and will work for the betterment of our people and our communities," said OJ Semans, co-executive director of Four Directions, a Native voting rights organization.

The powerful Native American vote plays a key role in several states crucial to the 2020 presidential race, and this event ensured that it will no longer be ignored by candidates.

Congressional Recess is Time for Action

Members of Congress have returned to their home districts for August congressional recess, making this the perfect time to schedule a lobby visit or simply drop by their offices. These visits have a significant impact, and serve as an ideal opportunity to advocate for the Violence Against Women Act (VAWA).

Take Action in Your Community

Put faith into action by dropping by your local congressional offices.

The House passed the reauthorization of VAWA (H.R. 1585) this spring, which included strong provisions for Native American communities. The Senate, however, is still negotiating their version of the bill.

When VAWA was most recently reauthorized in 2013, it restored tribal jurisdiction over non-Native Americans who commit crimes of domestic violence. This measure has effectively protected Native women from violence, but it offers limited protection for the community as a whole. The Senate reauthorization bill should expand the current tribal jurisdiction to protect children, tribal law enforcement officers, and victims of all forms of violence including sexual assault, sex trafficking, stalking, and child abuse.

Please take the time this August to meet with your senator and ask them to expand tribal jurisdiction in the reauthorization of VAWA!

Please take the time this August to meet with your senator and ask them to expand tribal jurisdiction in the reauthorization of VAWA!