Anti-personnel landmines are "designed to be exploded by the presence, proximity or contact of a person and that will incapacitate, injure or kill one or more persons.” As they are not able to distinguish between civilians and combatants, are hard to safely destroy or remove, and often fail to self-destruct or self-deactivate, landmines continue to inflict human suffering long after a conflict ends. 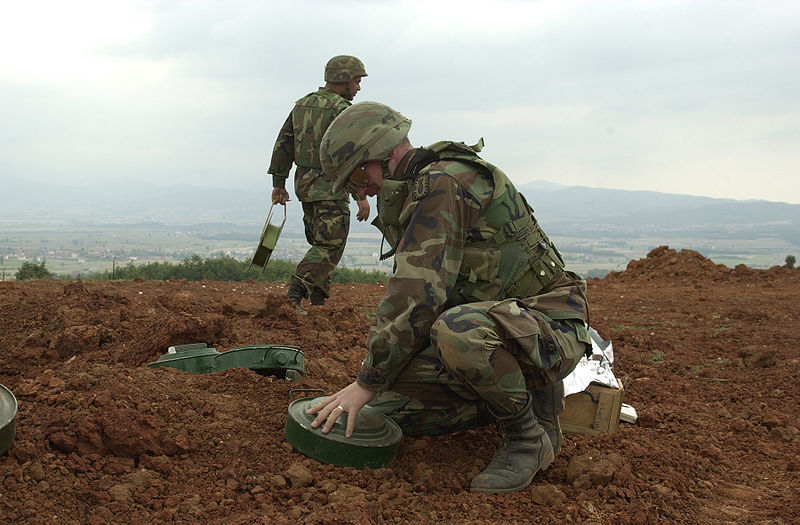 Since the ratification of the Mine Ban Treaty in 1997, there has been a global consensus against the use of anti-personnel landmines (APLs). Today, 164 countries are party to the Mine Ban Treaty, representing over 80 percent of the world’s states, and for the past six years the U.S. military has been prohibited from producing or acquiring APLs. In January 2020, the White House acted counter to that consensus by announcing a revised policy on the use of landmines. This new landmine policy cancels the 2014 policy on landmines, which had prohibited the U.S. military from producing or acquiring APLs or employing them outside of the Korean Peninsula and set the goal of the United States joining the 1997 Mine Ban Treaty. The administration’s new policy includes several key points:

Under this new policy, the U.S. will join a handful of countries that have refused to stop using and producing landmines: China, Cuba, India, Iran, Myanmar, North Korea, South Korea, Pakistan, Russia, Singapore and Vietnam. Between October 2015 and 2019, only the government forces of Syria, Myanmar, and North Korea, as well as non-state actors in conflict areas, have used landmines.

In justifying this dramatic policy shift, the Department of Defense makes the dangerously misleading distinction between “persistent” and “non-persistent” landmines, despite the documented failures of self-destruct and self-deactivation features. The Government Accountability Office (GAO) found that “smart mines” deployed in the Gulf War failed at a rate 150 times higher than the Department of Defense had reported.

The same report found that 6 percent of U.S. Gulf War casualties were caused by land mines. Given these statistics, there remains a serious concern that self-deactivated but not self-destructed landmines can provide material for Improvised Explosive Devices (IEDs) used against U.S. forces and civilians. As of May 2019, IEDs caused 47 percent of all U.S. deaths in Iraq and Afghanistan.

Additionally, mine fields are no longer carefully mapped or marked. Instead, they are often scattered by aircraft and artillery over unmarked terrain, on the assumption that the self-destruct and self-deactivation mechanisms make the land safe after a designated time span. This creates further danger for civilians and aid workers who have no way of knowing whether they are in or entering a minefield.

Regardless of self-destruct and self-deactivation mechanisms, landmines remain by nature indiscriminate, unable to distinguish between civilian and combatant.

In 1997, former commander of U.S. forces in Korea, Lt. General James Hollingsworth said that antipersonnel landmines’ “minimal” utility to U.S. forces is “offset by the difficulty …[they] pose to our brand of mobile warfare… Not only civilians, but U.S. armed forces, will benefit from a ban on landmines. U.S. forces in Korea are no exception.”

Nearly a decade later in 2014, retired Lt. Gen. Robert G. Gard, Jr. said that use of “high tech land mines” was “counter-productive” because such mines “impeded the maneuverability of our attacking units, slowed their operational tempo and inflicted casualties on our own troops.” The 2002 GAO report also found that U.S. commanders were reluctant to use mines because of their impact on mobility, their potential for fratricide, and other safety concerns.

Landmines are indiscriminate weapons that disproportionately impact civilians, and especially children. From 1999 through 2018, there have been 130,755 reported casualties from landmines and other explosive remnants of war (ERW), though the true number is likely much higher as accurate data is difficult to gather. According to UNICEF, as a result of the conflict in Donbass, eastern Ukraine is now one of the most mine-contaminated places on earth with some of the highest casualty rates, endangering over 400,000 children who live in the highly contaminated zone along the ‘contact line’ According to the 2019 Landmine Monitor:

Following the conflicts of the waning years of the Cold War, the growing number of civilian and peacekeeper casualties from APLs forced the international community to reassess the use of such munitions. The United States was one of the first governments to call for a comprehensive ban on APLs, introducing a U.N. resolution in 1996 calling for an international agreement to end their use. The Convention on the Prohibition of the Use, Stockpiling,

While the United States led the charge for such a treaty and participated in the Ottawa Process leading to the creation of the Mine Ban Treaty, it has yet to sign the Treaty.