As Congress resumes its work on Monday, Sept. 9, the House Judiciary committee is expected to take up three separate bills addressing different facets of gun violence. Taken together, these bills would represent a substantial step towards reducing the obscenely high rate of gun violence in the United States.

The three bills under consideration are:

Limiting access to firearms and high-capacity magazines, which are capable of holding many more bullets than a standard cartridge, could reduce the deadliness of mass shootings. Research on the effectiveness of such bans remains scarce, but initial reports indicate that it could have a significant impact: In Virginia after the 1994 assault weapons ban expired, high capacity magazines were found with increasing frequency at crime scenes (a 12 percent increase from 2004-2011). Further, a 2017 study estimated that, when taken together, assault weapons and high capacity magazines account for 22-36 percent of guns used in crimes. It’s only by reducing the amount and deadliness of weapons in our society that we can make progress towards making our communities safer.

Under current law, anyone who is convicted of a felony hate crime is prohibited from purchasing or owning a firearm. H.R. 2708 would extend that prohibition to anyone who is convicted of a misdemeanor hate crime. Misdemeanor hate crimes are still violent, especially when motivated by hate. They can include threatening or intimidating people of a different race or assaulting someone of a different religion. Research has found that individuals with a prior conviction for a violent misdemeanor were nine times more likely to commit subsequent violent crimes and firearm offenses. Currently 22 states and the District of Columbia have passed laws similar to H.R. 2708. This extended prohibition furthers the effort to keep guns out of the hands of people who are proven to be violent towards others.

ERPOs are a versatile policy that also helps keep guns out of the hands of people who are a threat to themselves or others. ERPOs allow families, household members, and/or law enforcement officers to petition courts to temporarily restrict an individual’s access to guns if the person poses a threat to themselves or to others. There have already been cases at the state level where ERPOs helped prevent potential mass shootings in places like Maryland and Vermont. ERPOs tend to be most effective at reducing suicides. In the state of Connecticut, which has an ERPO law, every 10-20 ERPO issued prevented at least one suicide.

FCNL supports House efforts to advance legislation to reduce the scourge of gun violence across our country. In addition to our lobbying work in Washington, D.C., FCNL’s Advocacy Corp—a group of 20 young adults who are organizing in local communities throughout the U.S.—is working to build support for policies intended to end gun violence. We urge you to join these young leaders in taking action on this important issue. Write to your member of Congress and urge them to support H.R. 1236.

The gun violence epidemic facing our country is a public health crisis that can be avoided – but only if Congress takes action. 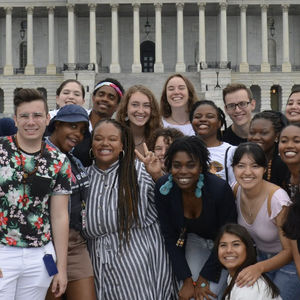 Meet the 2019-2020 class of Advocacy Corps Organizers. These 20 young adults from around the U.S. will be organizing their communities to end gun violence.

Gun violence is a public health crisis that our country has been facing for decades. While it’s the mass shootings that grab the headlines, gun violence comes in far more common and pernicious forms. Suicides, accidental deaths, domestic violence, and homicides in urban areas and communities of color all take a toll on our society. We seek a society where we can feel safe in our communities doing ordinary activities without the risk of violent death.