Richard Lugar was laid to rest last week in his home state of Indiana.

I had the privilege of watching Senator Lugar at work up close, during my time on the staff of the Senate Foreign Relations Committee. I cannot capture all of my profound admiration for the example he set. In 2012, Senator Lugar received FCNL’s Edward F. Snyder Award for National Legislative Leadership in Advancing Disarmament and Building Peace. 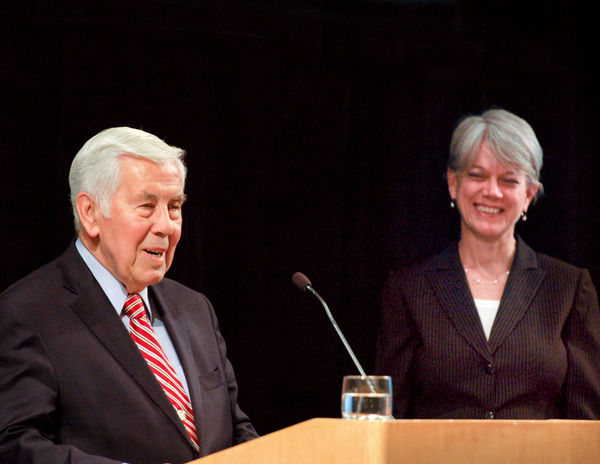 My deep sorrow at his passing has been tempered somewhat by signs that his bipartisan, cooperative approach to peaceably reducing nuclear dangers might yet live on in Congress.

A dedicated Republican, Senator Lugar never shied away from reaching across the aisle. In 2010, he helped secure Senate approval of the New START Treaty capping U.S. and Russian strategic nuclear arsenals, reaching out to former Senator and Democratic presidential nominee John Kerry.

That same spirit is needed again to preserve the New START Treaty. It is slated to expire in early February 2021, just days after President Trump’s current term ends. The treaty lets Russia and the United States extend the treaty—and its extensive data sharing and verification regime—for up to five years without further Senate approval.

These are commendable goals—but also highly ambitious ones. If it falls short of its goals in negotiations, the Trump administration has not yet committed to extending New START.

This is a mistake.

The Democratic Chair and ranking Republican on the House Foreign Affairs Committee, Representative Eliot Engel (NY-16) and Michael McCaul (TX-10), have followed Senator Lugar’s example and reached across partisan divides to back legislation pushing for the treaty’s extension. Their bill, H.R. 2529, would work to lock in New START’s progress in nuclear risk reduction, even as both countries explore improvements.

Senator Lugar showed how Congress could positively shape U.S. relations with the world, and how the rejection of partisan limits could advance U.S. security and reduce global nuclear dangers.

As the nation mourns Senator Lugar’s passing, I take hope in watching members of Congress follow his noble path.