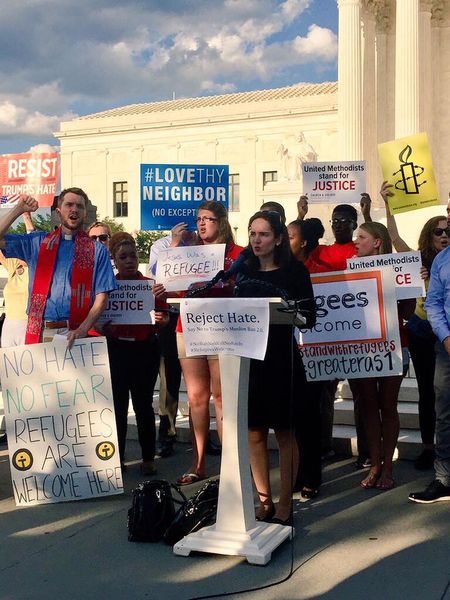 FCNL Yasmine Taeb addresses the crowd at the rally

The protest, organized by Taeb with support from Amnesty International USA, Church World Service, MoveOn, the American Civil Liberties Union, and more than a dozen other organizations, drew a sizable crowd.

"We are disappointed with the Supreme Court’s decision today, which would put into effect parts of this administration’s unconstitutional and unconscionable Muslim and refugee ban," Taeb said in her opening remarks. "Trump’s Muslim and refugee executive orders violate our core values of religious liberty and runs counter to American values. These executive orders are unconstitutional, reprehensible, and immoral."

"The United States was built by immigrants and refugees; we have a strong, treasured tradition of welcoming those fleeing violence and persecution," Taeb said.

"It’s a tradition my own family and I benefited from," she continued, explaining that she herself fled Iran during the Iran-Iraq War and was welcomed in America.

In conclusion, Taeb noted that the struggle is far from over, but that she trusts advocates will remain strong. "As we’ve said over and over again, we will be here every single day if need be to protest these discriminatory and unconstitutional, unacceptable policies," she said.

US District Court Judge Derrick Watson ruled on July 13th that the administration cannot apply its travel ban to close relatives of individuals in the United States or refugees given "formal assurances" of resettlement by U.S. resettlement agencies.