FCNL welcomes the decision of the U.S. Court of Appeals for the 4th Circuit to uphold a block on President Trump's March 6th executive order barring individuals from six Muslim-majority countries. 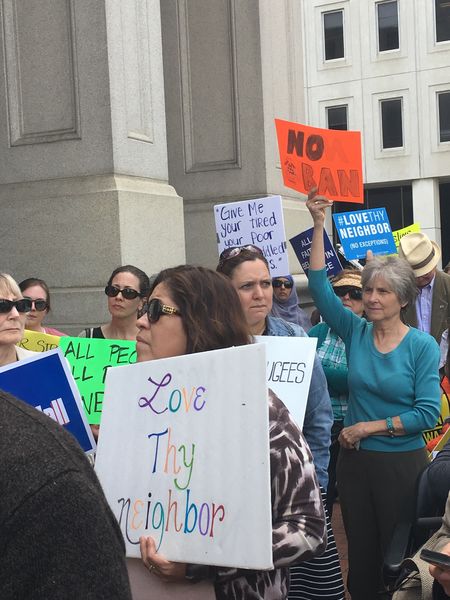 Expressing doubts about the policy’s true intent and concern about its potential impact, judges on the U.S. Court of Appeals for the 4th Circuit voted to uphold a block on the Trump administration’s Muslim Ban. This reprehensible and unconstitutional ban, contained in an executive order signed by President Trump on March 6th, would bar the entry of individuals from six Muslim-majority countries to the United States.

“FCNL welcomes the Fourth Circuit’s decision to maintain the suspension of this unconstitutional and unconscionable executive order,” said FCNL Lobbyist for Human Rights Yasmine Taeb. “By showing cruelty to refugees seeking safe haven in the United States, betraying the strong American tradition of welcome, and introducing a new form of discrimination into our immigration system, this executive order goes against everything that we stand for and should never be implemented.”

“We also applaud the court’s frank comments on the executive order’s true intent,” Taeb said. “From the very first stages of its planning through today, this executive order has never been anything more than a thinly-veiled attempt to translate anti-Muslim prejudice directly into policy.”

In its decision, the court gave credence to claims that the travel ban is designed to discriminate on the basis of religion. Citing a number of statements made by President Trump expressing his intention to enact a Muslim Ban, the decision states:

“These statements, taken together, provide direct, specific evidence of what motivated [the executive order]: President Trump’s desire to exclude Muslims from the United States. The statements also reveal President Trump’s intended means of effectuating the ban: by targeting majority-Muslim nations instead of Muslims explicitly.”

Given the Trump Administration’s ongoing attempts to deny any discriminatory intent, the fourth circuit's decision demonstrates its unwavering intention to maintain its independence and speak the truth.