Instead of giving the Pentagon and weapons contractors their $24 billion wish list for weapons and war, the American people deserve to get their unfunded needs met.

President Dwight D. Eisenhower famously said, “Every gun that is made, every warship launched, every rocket fired signifies, in the final sense, a theft from those who hunger and are not fed, those who are cold and are not clothed.”

Instead of giving the Pentagon and weapons contractors their $24 billion wish list for weapons and war—in addition to the $813 billion that President Biden already requested for the Pentagon in FY 2023—the American people deserve to get their unfunded needs met.

Make the Child Tax Credit (CTC) Fully Available to Families with Little or No Income
Cost: $12 billion for one year 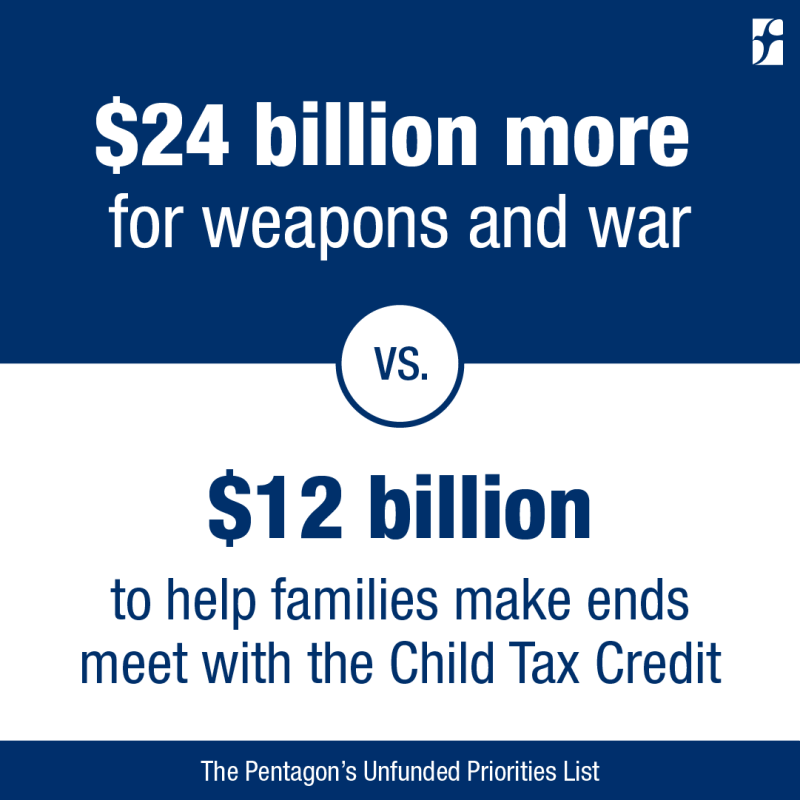 Allowing families with little or no income to claim the full value of the CTC could lift 4 million children above the poverty line. This expansion would narrow the gap between the poverty rates for Black and white children by 44%.

Expanding the CTC is one of the most effective ways to provide relief to families struggling with higher food and gas prices in the face of historical inflation. A report from Moody’s Analytics found that higher inflation rates cost families an additional $296 per month, almost equivalent to a monthly payment of the expanded CTC for one child.

Ease the Burden on Low and Moderate-Wage Workers 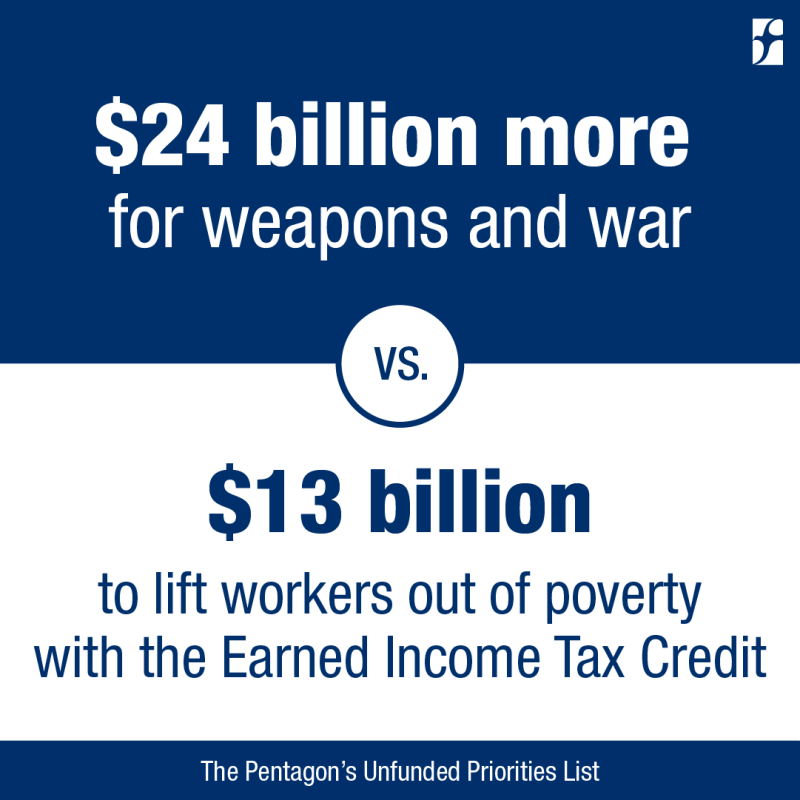 The EITC is a tax credit offered to low-income workers. One of the most successful anti-poverty programs, in 2018, the EITC benefited more than 22 million workers and lifted approximately 5.6 million people over the poverty line. However, workers not caring for a child in their homes are largely excluded from the credit. The American Rescue Plan expanded EITC by tripling the maximum benefit for childless workers and expanding eligibility for young and older workers. Those expansions expired on December 31, 2021. An expanded EITC would prevent millions of low-wage workers from being taxed further into poverty. 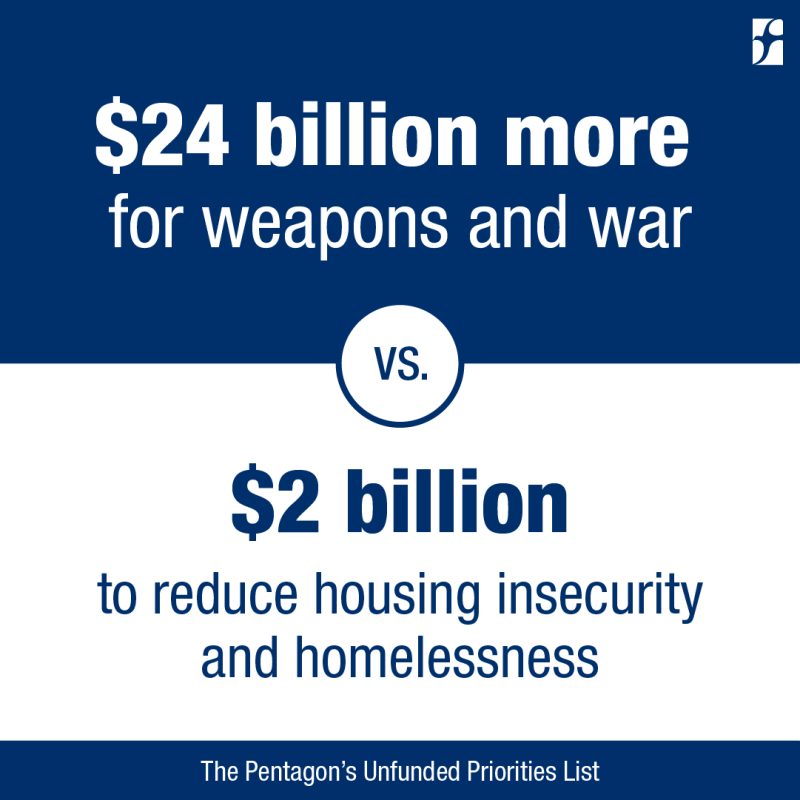 The Housing Choice Voucher Program is the country’s most extensive rental assistance program. Housing Choice Vouchers help reduce homelessness. Children in families who receive vouchers experience fewer behavior problems and are less likely to be placed in foster care. Further, children whose families use vouchers to move to neighborhoods with less poverty are more likely to attend college. This program can have a transformative impact, but demand is high and current wait lists are so long that some housing agencies have stopped taking applications. 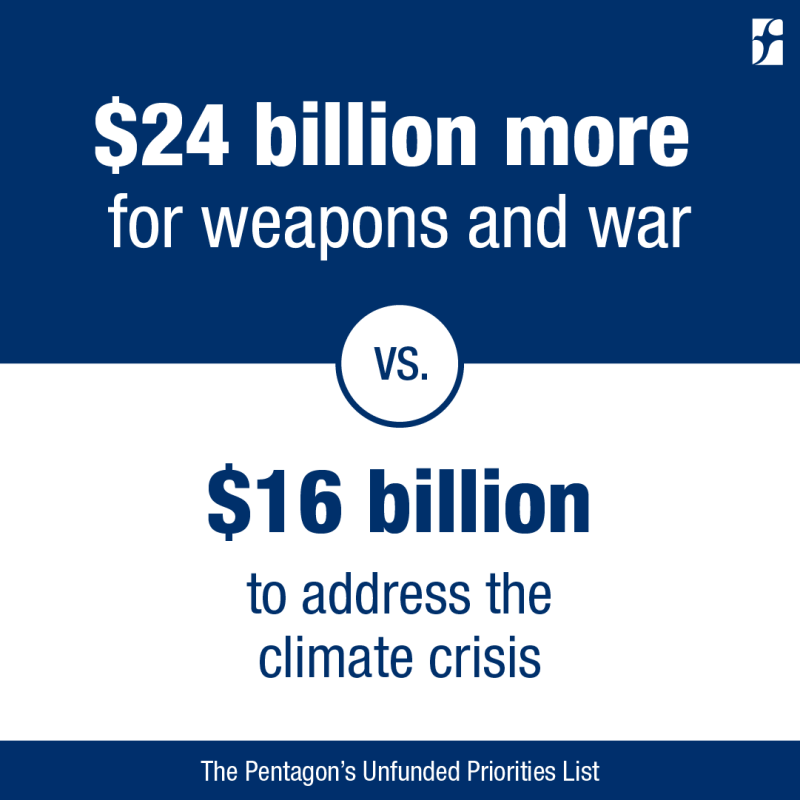 It is our moral obligation to address climate change and protect vulnerable communities. Over the next decade, Congress should invest in clean transportation, pollution reduction, and energy efficiency. Money needs to be set aside for clean air funding, clean water funding, and sustainable housing. This bundle of priorities is essential to meeting the Biden administration’s emissions reduction commitment and does so in a way that protects and supports environmental justice communities—folks who are most burdened by the effects of climate change. Any remaining funds should support workforce development, data collection, and climate resilience. These investments would be a solid next step toward a just clean energy economy. 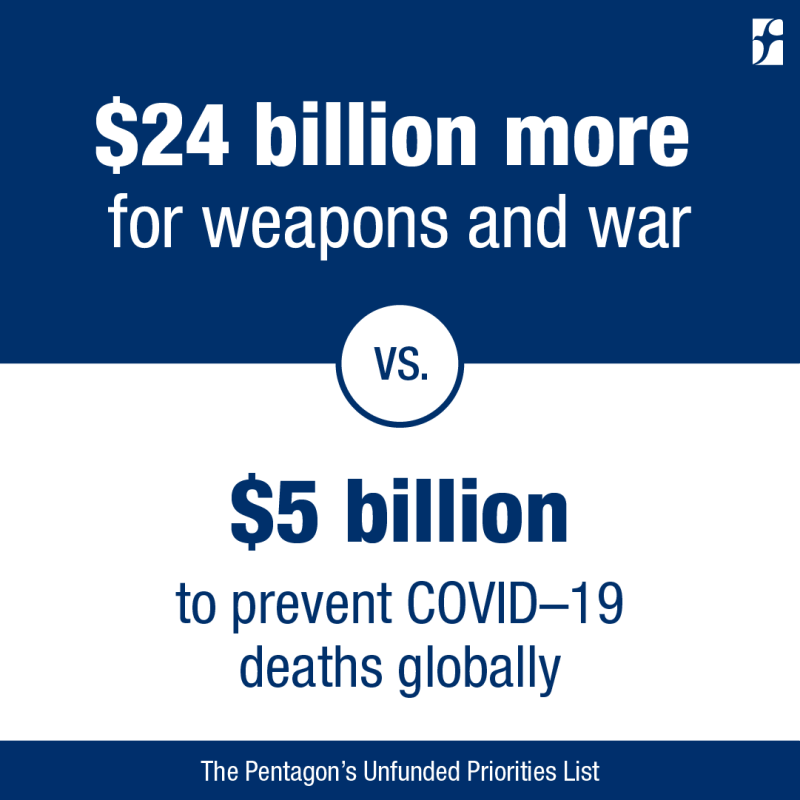 By the first year of the pandemic, the United States had already purchased enough COVID-19 vaccines to fully immunize every adult in the United States three times over. Unfortunately, the nation has delivered less than half of the 1.1 billion vaccine doses it pledged to donate toward global immunity. Since the pandemic began, America has spent 7.5 times more on nuclear weapons than on aiding the billions of people around the world still in need of vaccines. As CARE Vice President Ritu Sharma stated, “If this Congress isn’t willing to devote a tiny fraction of the budget to stopping COVID, they need to brace themselves for the next variant. Our economy will suffer far more from continuing shutdowns and collapsing supply chains—not to mention losing thousands more lives.”

Former Senior Strategist and Legislative Director for Foreign Policy
Diana Ohlbaum directed FCNL’s foreign policy lobbying team and leads an effort to replace the current U.S. foreign policy paradigm of military domination and national superiority with a more ethical and effective one based on cooperation and mutual respect.