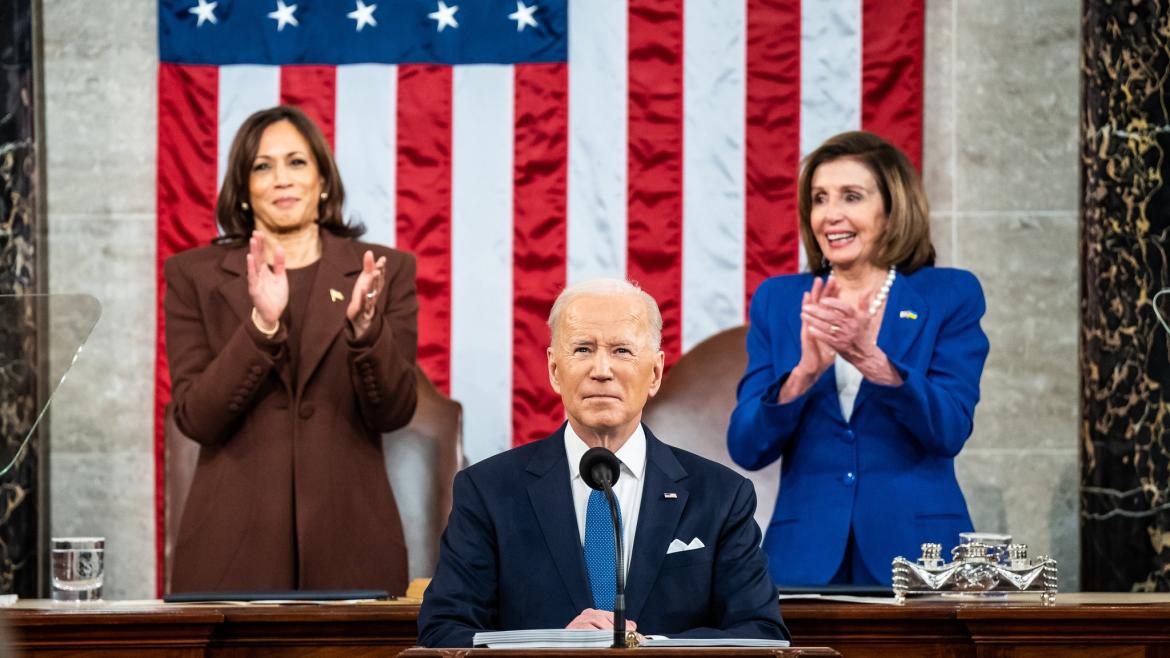 On Tuesday, March 1, President Joe Biden laid out his priorities for the next year in his nationally televised State of the Union address. As we watched, we were pleased the president stated his commitments to many of FCNL’s legislative priorities. However, his rhetoric on the war in Ukraine, which focused on the tools of war, gave us pause. The president seemed to leave Congress and the American people unprepared for the diplomacy that will be needed to end the Ukraine war.

Below are some of our key takeaways from the State of the Union Address.

Responding to the War in Ukraine

We join President Biden in his strong condemnation of Russia’s illegal invasion of Ukraine and acknowledging the real human toll this war is taking on people in Ukraine, Russia, and the broader region. As Quakers, we reject all forms of war and are called to show compassion to those who suffer.

The Biden administration’s commitment to multilateralism, and its extensive efforts to rally the international community to condemn this illegal invasion, engage the United Nations, and support unified sanctions targeted at the Russian leadership, were welcome steps.

Diplomacy is risky, and negotiations with an aggressor are not always successful. But leadership includes taking risks for peace even when the prospects don’t look good.

However, what was missing from the president’s speech was an effort to rally the American people and Congress behind diplomacy. Wars end with negotiations, but the U.S. is doubling down on war. Congress is now considering the president’s request for roughly $10 billion in additional funds to address the crisis in Ukraine, with much of that money focused on weapons and security assistance.

The United States must not enter this war—and the U.S. shouldn’t send more weapons either. Assistance must be directed toward humanitarian efforts—toward programs to protect civilians, to support nonviolent civilian response, and high-level efforts to support the diplomacy that has already started. We encourage all parties to remain at the negotiating table and keep lines of communication and dialogue open and active.

Diplomacy is risky, and negotiations with an aggressor are not always successful. But leadership includes taking risks for peace even when the prospects don’t look good. Ultimately, diplomacy is the only way this war will end.

We had hoped to hear more about the climate crisis, which President Biden himself has described as an “existential threat.” But his call for Congress to incentivize America’s renewable energy production and lower electric vehicles costs was encouraging. This push is in line with the climate initiatives in the Build Back Better Act, whose investments represent a crucial aspect of the U.S. response to climate change.

Urging Congress to pass the Build Back Better Agenda

While President Biden never said the words “Build Back Better,” he did repeatedly urge Congress to pass his plan to address the climate crisis and lower costs for families. He specifically named extending the expanded Child Tax Credit, capping the cost of child care, providing housing assistance, and other critical anti-poverty measures. We hope the State of the Union Address injects new energy into negotiations to pass legislation encompassing those key Build Back Better priorities.

Supporting a Pathway to Citizenship

President Biden’s remarks emphasized the urgency for immigration reform. His message included the need for a pathway to citizenship for Dreamers, those with temporary status, farmworkers, and essential workers, as well as fair and expedited adjudication for families fleeing violence and conflict. Despite promises to lead on the international stage, however, he failed to position the United States to respond to global migration arising from humanitarian crises or demonstrate that safe and humane migration policies reject militarized borders.

Voting is a fundamental right—one that has come repeatedly under attack recently. The President dedicated just one minute to this critical topic, calling on the Senate to pass the Freedom to Vote: John R. Lewis Act. Passage is desperately needed but faces long odds in the deeply divided chamber. We need real leadership and congressional action on voting rights.

We were surprised and delighted to hear the President name violence interrupters—or credible messengers—as an essential strategy to reducing community violence. This work goes to the heart of the Quaker Peace Testimony. Well-resourced violence interrupters are a key tool to address and prevent violence before it starts.

Where Do We Go from Here on the Child Tax Credit and Earned Income Tax Credit?