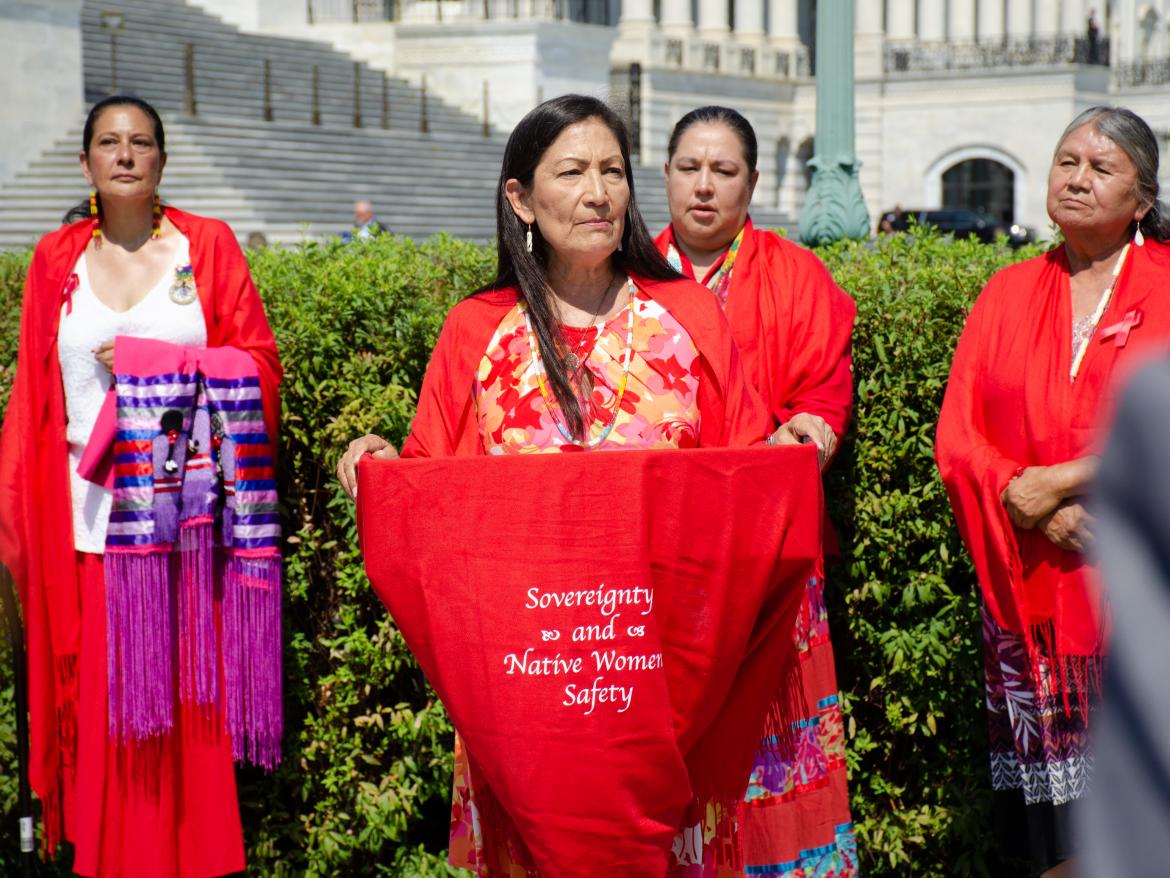 This article is excerpted from Rep. Haaland’s speech in accepting FCNL’s first Justice Award during the 2020 Annual Meeting. She was honored for leadership in addressing the crisis of Missing and Murdered Indigenous Women. Rep. Haaland is a member of the Laguna Pueblo Nation.

Native American people in this country come from communities that have historically faced genocide, forced removal, and loss of resources that date back to the arrival of Christopher Columbus in the late 1400s.

This resulted in centuries of racism and historical genocide against Indigenous people, which included severe physical and sexual violence against Native women, transwomen, and two spirit people. They all continue to be sexualized or overlooked in the media today.

The evidence of this crisis and false romanticizing of Native women is even hanging in plain view at the Capitol Rotunda, which ironically is the epicenter of our democracy.

If you go to the Rotunda today, you will find life-sized oil paintings that depict the so-called “beginning” of this country. They illustrate the ethnic cleansing and conquest of Native Americans—including depictions of colonizers baptizing Pocahontas in a Christian church and fearful, unclothed Native women running from the Europeans when they arrived on our land.

On the same wall in the Rotunda, you will also find a painting of the signing of the Declaration of Independence, a document that says, “all men are created equal.” However, only 30 lines below that, the Founding Fathers refer to Native Americans as “merciless Indian savages.”

To put this history into perspective, it has been 243 years since the Declaration of Independence was signed, 230 years since the first United States Congress met, and 194 years since these paintings in the Rotunda were hung. This shows just how long the Missing and Murdered Indigenous Women’s (MMIW) crisis has gone unnoticed and even normalized in American culture.

However, it has only been 23 months since my sister, Rep. Sharice Davids (KS-03), and I were elected as the first two Native American women to serve in the United States Congress.

It has taken Native women over 240 years to finally hold a congressional seat in the United States government where we can finally advocate for missing and murdered Indigenous women so they are no longer silent.

However, in our tribal communities, this crisis has never been “silent.” It has been passed down through generational trauma from many failed federal policies and severe underfunding for basic public safety services on reservations. Yet little has been done at the state or federal level to combat the issue.

This is why I have worked so hard to shed light on these issues and introduce legislation in Congress to bring healing to our communities.

There is absolutely no reason why Native women and girls should have to fear that no one will act if they are harmed.

Among the most crucial pieces of legislation that I have brought forward is the Not Invisible Act (P.L. 116-166), the first bill introduced by four federally recognized tribal members.

This bill works to establish an advisory committee comprised of law enforcement, tribal leaders, survivors, and the family members of survivors to address this harrowing epidemic and the jurisdictional solutions to the complex legal framework of tribal lands.

I am immensely proud to announce the both the Not Invisible Act and Savanna’s Act were recently signed into law. They begin the long road ahead to bring justice to Indigenous people.

My legislative work is important to me because there is absolutely no reason why Native women and girls should have to fear that no one will act if they are harmed.

It will take a profound and unanimous effort to dismantle this destructive cycle and the corrosive narratives about Indigenous people in this country, but I am hopeful that we will see change in our lifetimes so we create a better future for our young Indigenous women and two spirit people.

Support Tribal Provisions in the Violence Against Women Act

A New Season of Hope and Opportunity
Viewpoint: It’s Never Been a “Silent” Crisis
FCNL Priorities for the 117th Congress (2021-2022)
A Quaker Vision for Migration Justice
A Record-setting Virtual Event
William Penn House: What’s in a Name?