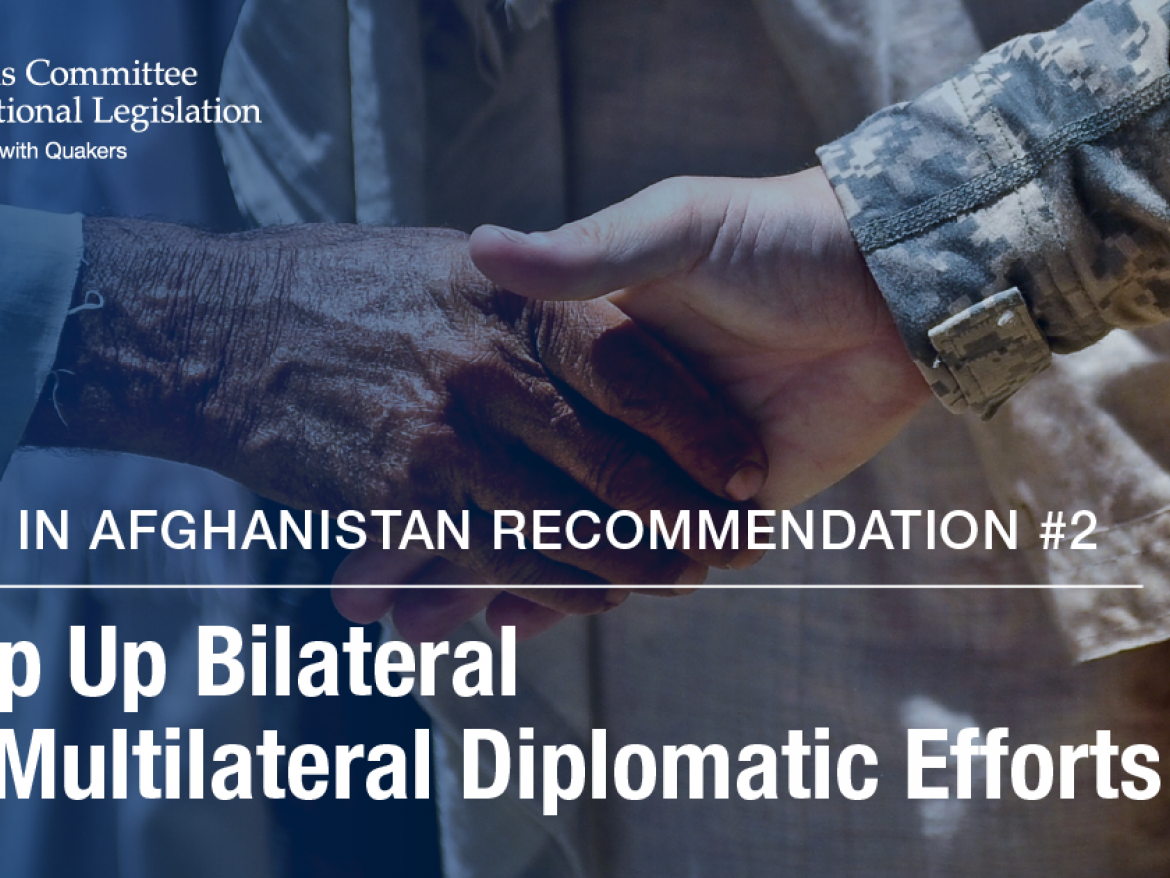 The agreement reached between the United States and the Taliban in February 2020 is a vague exit deal and not the comprehensive peace agreement that will be required to responsibly end the Afghanistan war. Nonetheless, the answer is not to revert once again to more militarism, but instead to keep talking and pushing for an inclusive peace agreement.^1

The only way out of the intractable conflict in Afghanistan is an inclusive, Afghan-led, negotiated peace agreement.

The fact that U.S. troops are leaving does not mean that the United States has no role left to play in Afghanistan. The U.S. government continues to hold diplomatic and economic leverage that can be used to influence intra-Afghan talks and press for key components that are crucial for success. These include:

Intra-Afghan talks cannot succeed amidst continual, deadly violence. The United States and the international community should press for a ceasefire that reduces incentives to use violence as leverage and enables all parties to come to the table safely.

The inclusion of women, youth and minorities is imperative to the success of any peace agreement. Indeed, women in Afghanistan have been mobilizing and they must be part of the solution if it is to succeed. This approach is reflected in stated U.S. policy, including the Women, Peace, and Security Act signed into law by President Trump in 2017. Further, meaningful inclusion of youth sets a precedent for their participation in the country’s affairs and empowers them as a proactive voice of opposition to violence.

The United States is not the only country with interest or leverage in Afghanistan. Other countries, as well as international bodies, can play a role in facilitating or mediating talks, as well as monitoring and enforcing implementation of any deal.

The prisoner exchanges required under the withdrawal agreement are necessary to wind down the conflict, but if former fighters are not provided with opportunities for rehabilitation and reintegration, they could likely again revert to violence. Though it will take time to build the trust necessary for implementation, DDRR will be a necessary component for sustainable peace in Afghanistan.

An inclusive and negotiated good-faith peace agreement is the only way to actually address the root causes of the insurgency conflict, improve security for the people of Afghanistan, and prevent a return to widespread cyclical violence. This is something U.S. military leaders have acknowledged, including former chairman of the Joint Chiefs of Staff Gen. Dunford, who stated that though Afghanistan currently depends on U.S. support to deal with levels of violence, a negotiated agreement could change that reality.

Encourage regional actors to play a constructive role in supporting peace in Afghanistan.

The Afghanistan conflict reflects long-standing rivalries among the different ethnic and tribal groups within the country, but it has long been exacerbated by outside powers seeking to protect or advance their own interests by supporting and resourcing fighting factions. Many of these countries maintain close trading relationships with Afghanistan and contribute economic and development assistance. Many of them also have supported and continue to support various warring factions within Afghanistan.

The United States should thus ramp up its diplomatic efforts to seek a multilateral commitment among regional actors.

Pakistan is perhaps the main potential spoiler of peace in Afghanistan, having directly supported the Taliban and other groups in the name of countering India. India has also built a footprint within Afghanistan in an effort to resist Pakistan’s influence, and the recent clash between the two powers over contested territory in Kashmir threatens to heighten the stakes for all involved. Similarly, both Russia and China have agendas in Afghanistan, from advancement of China’s Belt and Road Initiative for global development to Russia’s desire to rebuild influence in the region.

Complicating matters further, Iran shares a border with Afghanistan, hosts a sizeable Afghan population, and has a complex history of facilitating support for both the Afghan government and the insurgent Taliban.

The United States should thus up its diplomatic efforts to seek a multilateral commitment among regional actors to stop fueling violence in Afghanistan. While a negotiated and inclusive intra-Afghan peace agreement is the only solution to the ongoing insurgency, its chances for success will be hampered as long as external actors fuel fighting factions through resources, intelligence, training, and other support. Afghanistan’s violence will remain intractable so long as regional players view it as an arena upon which to fight their proxy battles.

Further, the United States should use diplomatic pressure to secure agreements from other governments that also provide assistance to Afghanistan to condition and leverage their aid to encourage outcomes such as protections for women and girls, security sector reform, DDRR, reduced corruption, and other objectives that not only serve the people of Afghanistan, but also help stabilize the region.

[1] On at least three separate occasions, the United States has had the opportunity to work diplomatically to avoid further bloodshed in Afghanistan, but has squandered every opportunity. This includes a 2001 offer from the Taliban to hand over Osama bin Laden, another occasion very soon after the initial U.S. invasion in which the Taliban and Afghan government were on the precipice of negotiating an agreement but the U.S. stifled it, and yet another opportunity during the Obama administration’s 2010-2011 “surge.”* See: Spencer Ackerman, “The Taliban Peace Deal Might Have Been Had Many Years and Thousands of Lives Ago,” Daily Beast, February 29, 2020; Kathy Gannon, “Bush Rejects Taliban Bin Laden Offer,” Washington Post, October 14, 2001.F