The rally took place on May 3, at Edward R. Murrow Park in Washington, D.C. Diane Randall, Executive Secretary of the Friends Committee on National Legislation, offered the following remarks. 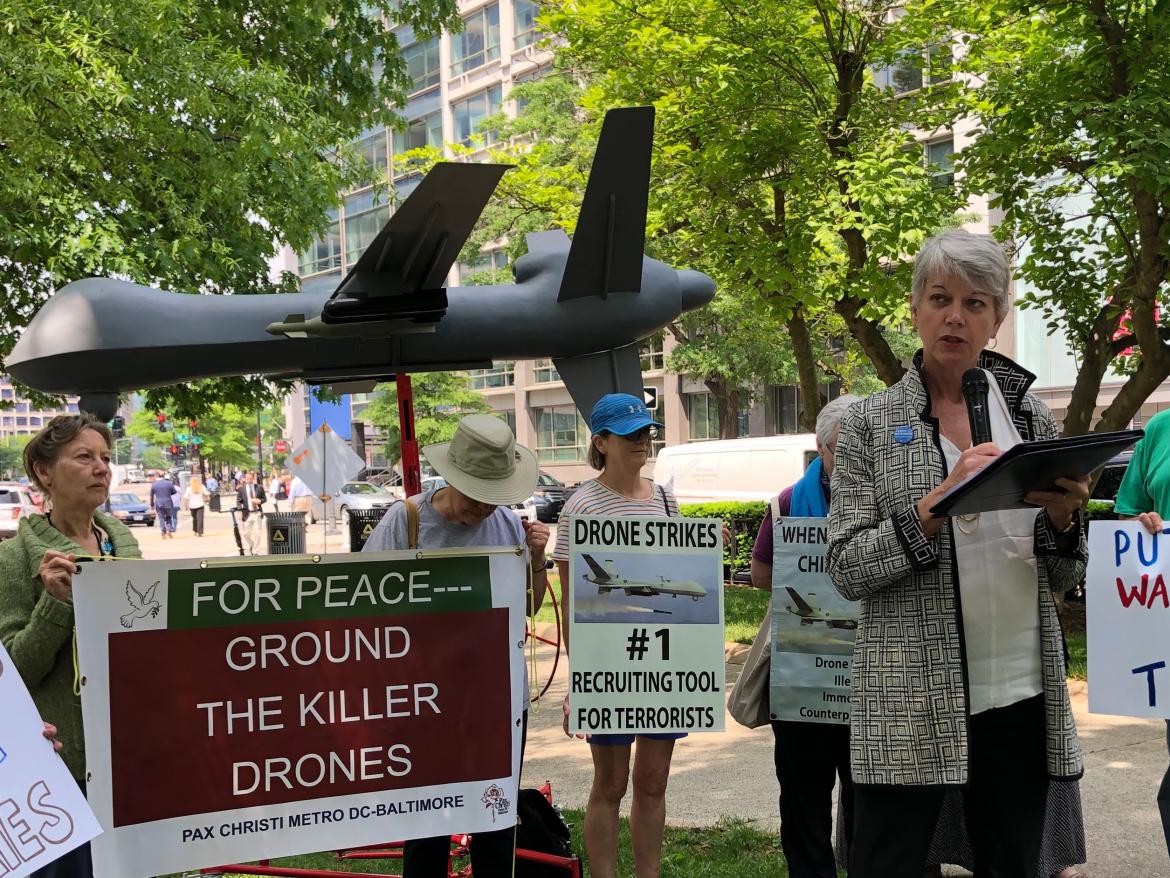 Friends, as we gather here today, we have no guarantee that the tide of peace is rising across the globe. Recent developments in Venezuela, Yemen, and Sri Lanka are clear warning signs of what can happen when peace and stability are not encouraged or valued. Human lives and livelihood is at stake.

Jesus teaches us to “Love Thy Neighbor.” Drone strikes that include the killing of civilians is counter to people of all faiths, who find meaning in our relationships to each other, our common humanity and God.

The truth is, long-term peace and security do not happen by accident. They must be worked at and nurtured each and every day. Peacebuilding, as we know, is long-term and difficult work. Most importantly, it is work that we should not be undermining with over sixty-five hundred and counting anonymous drone bombing missions the world over - all but completely unknown to we the people. And that is just the count starting in 2007.

How can we justify the fact that we as a nation have been using lethal drones to kill people worldwide since 2002? Drones are one of our primary weapons in undeclared wars and their use has dramatically increased in the past 15 years.

George W Bush, Barack Obama, and Donald Trump have all justified the U.S. drone program under the 2001 Authorization of Use of Military Force, passed days after the attacks of September 11. But since then, drones have been used all over the world - both inside and outside of warzones - without authorization or consent from Congress – and often hidden from the American people.

Some make the argument that drones are a low cost alternative – both human and financial - to traditional war. But this is far from the case. Since 9/11, the use of lethal drones has kept us in an endless state of war. These wars have resulted in the deaths of approximately 500,000 people, half of them civilians, at a cost of more than $5.9 trillion.

How have drones affected the people in these countries? For that matter, how have they affected us? Jesus teaches us to “Love Thy Neighbor.” Drone strikes that include the killing of civilians is counter to people of all faiths, who find meaning in our relationships to each other, our common humanity and God.

Our drone program is setting a troubling precedent for how drone operations are and will be conducted by other nations. As of 2018, nine other countries have developed or acquired armed drones, with others rapidly developing their own programs. This, while non-state actors like ISIS are actively seeking to acquire armed drones and their underlying technology. This is not a roadmap to peace.

It is time – nearly 20 years after our first lethal drone strikes - to acknowledge that this harmful drone program should end. It is immoral, unethical, and prolongs the United States in endless wars.

The path forward should be one of peace, not war without end.