Thousands of FCNL volunteer lobbyists from Florida to Alaska visited Congressional offices last year to lobby respectfully and in a non-partisan manner for the world we seek. You advocated to support sentencing reform, to support legislation to prevent atrocities, to oppose U.S. support for the Saudi war in Yemen, and to prevent cuts to the food stamps program.

Several of the resulting bills passed Congress and were signed into law, and others are moving policy without becoming law. For example, the Senate passed a historic resolution on Yemen, essentially re-establishing Congress’s constitutional authority to declare war and putting pressure that is driving peace talks that could end that war. 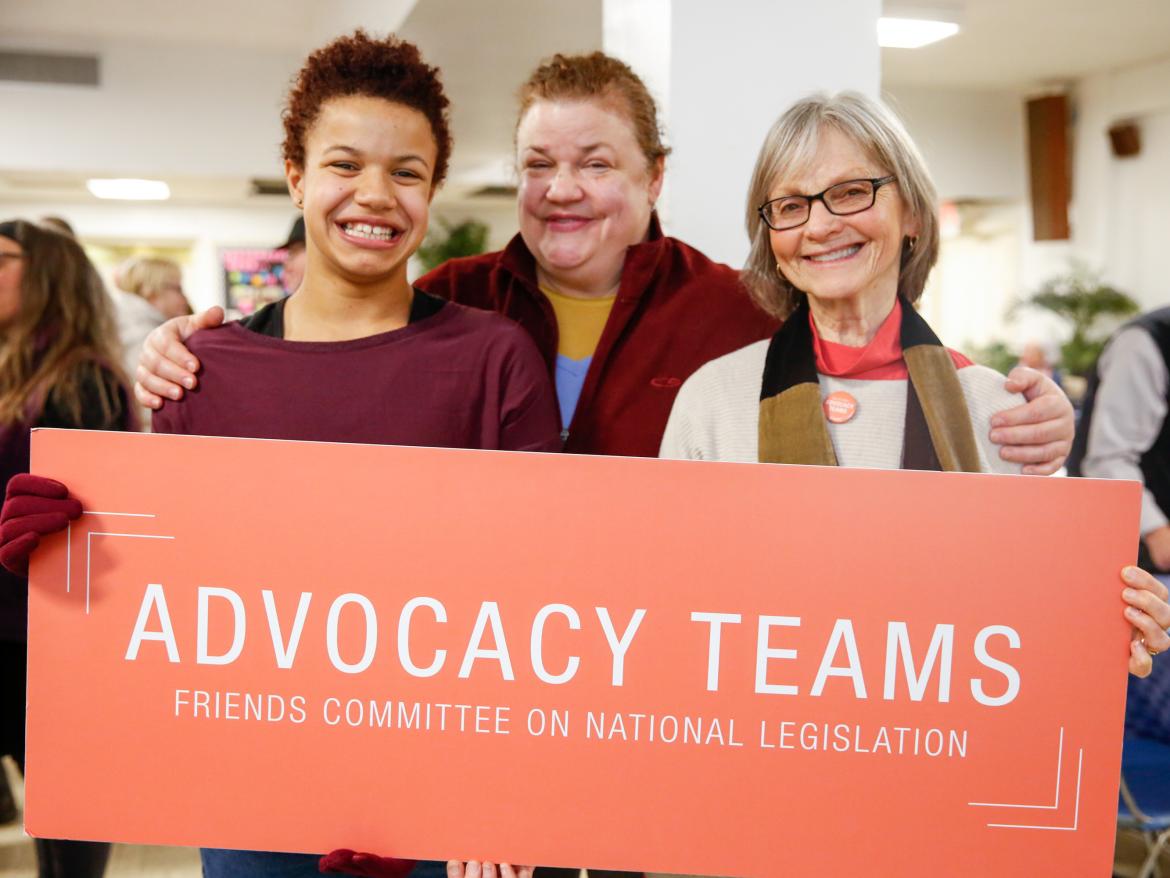 Attribution
Jennifer Domenick
Your work—whether as Quaker advocates, members of FCNL Advocacy Teams, or as an FCNL Advocacy Corps organizer—made a major difference during the 115th Congress.

“You changed my mind,” one member of Congress told FCNL advocates recently. He praised them for their persistence, their letters to the editor, and their respectful engagement with his office. Not all our advocates heard such dramatic words, but many received thanks for their efforts.

“You all do advocacy just right,” staff for a Republican senator told another team. Throughout the year, FCNL’s volunteer network of advocates kept hearing thanks for their engagement with Congress.

FCNL’s 97 Advocacy Teams alone logged 286 lobby visits and published nearly 200 letters to the editor around the country in 2018. But most importantly, they secured Congressional co-sponsorship of legislation that pushed back against dangerous threats of U.S. military action against North Korea.

Those numbers don’t include the nearly 600 people that FCNL’s Advocacy Corps brought into Congressional offices last year. These local organizers, mostly students, advocated on climate change and then against the militarization of local police.

Several Advocacy Corps organizers also used the mid-term election to raise issues with candidates running for office, many of whom are now members of the new 116th Congress. Through FCNL’s Quaker advocacy program, we organized three separate meet-the-candidate events to put our issues on the agenda for candidates. running for office.

Rep. Barbara Lee (CA-13), addressing a recent conference call of FCNL Advocacy Teams, reflected on the importance of FCNL’s work. “Thank all of you for all the work that you do to advance peace and justice. I just don’t know what we would do without FCNL and your advocacy. Your work is remarkable; we are making progress thanks to you.”

Associate General Secretary for Strategic Advocacy
Jim Cason is responsible for directing the full range of FCNL’s strategic advocacy work. In this capacity, he works with program staff to develop long term change strategies that accomplish our particular legislative goals.

Washington Newsletter: Our Progress Towards the World We Seek

Creating a Durable Peace in Afghanistan

Why Congress keeps giving the Pentagon more money than it needs