As members of the Prevention and Protection Working Group,* we urge you to support funding that works to prevent and respond to violent conflict throughout the Fiscal Year 2019 appropriations process.

We are concerned about the White House FY19 Budget, which amounts to a nearly 30% reduction in funding for the overall International Affairs Budget. We very much appreciate your bipartisan leadership to push back against dramatic and devastating cuts in both FY17 and FY18. We urge you to maintain overall funding levels at no less than $57.4 billion for the State, Foreign Operations, and related Programs Appropriations bill for FY19.

If the U.S. government is to be successful in doing what it can to reduce human suffering and limit the threats posed by the outbreak of violent conflict and state collapse, then robust investments in diplomacy and development – particularly in funding that works to support resiliency and address root causes that can give rise to violence – are prudent. 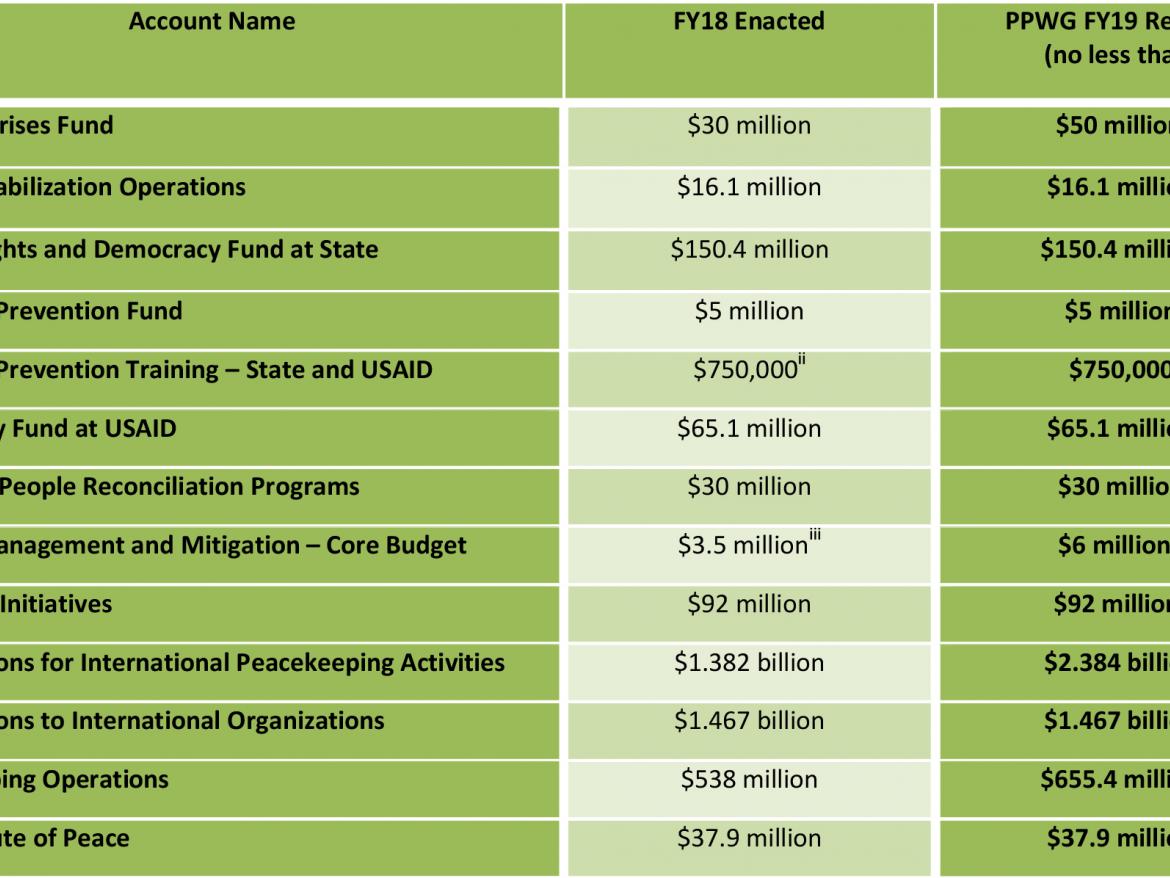 We remain particularly concerned about funding for the Complex Crises Fund and Conflict Stabilization Operations, both of which have seen reductions in the amount of money appropriated in recent years.

The Complex Crises Fund (CCF) is a critical funding mechanism that supports USAID’s ability to prevent and respond to unforeseen crises. It’s the only account of its kind, filling immediate, short-term gaps for which there would not otherwise be resources. CCF is in high demand, and has directly supported initiatives to prevent mass atrocities in collaboration with the Atrocities Prevention Board. It has been utilized places like Jordan, Lebanon, Ukraine, Libya, Mali, Somalia, Nigeria, Burundi, and the Central African Republic. We urge no less than $50 million for CCF, and that this funding be allocated to USAID.

The Conflict Stabilization Operations account supports the work of the Bureau of Conflict and Stabilization Operations (CSO) at the Department of State. CSO is a vital part of U.S. efforts to be more effective in preventing and responding to violent conflict. CSO works with partners to break cycles of violence, strengthen civilian security, and mitigate crises in priority countries in support of U.S. national security interests. The Bureau also serves as the hub for the State Department’s atrocities prevention work, providing dedicated expertise, analysis, planning, and coordinating in support of priorities of the Atrocities Prevention Board. Decreases in funding for this account limit the ability of the State Department to conduct conflict analyses, send conflict experts to support embassy staff, and conduct diplomatic intervention programs. We urge no less than $16.1 million for CSO, and that this amount be specified in the language of the bill.

Finally, we urge that funding for the prevention of violent conflict not come at the expense of other effective humanitarian and development funding. Thank you for your continued support and leadership for the critical work of the State Department, and USAID that serves to promote American interests, advance global security, and save lives.

[i]: PPWG has repeatedly urged the funding of the Complex Crises Fund (CCF) at $100 million, which matches the $100 million in 1207 transfer authority that was the predecessor to CCF and is the number originally intended when the account was created by the Senate in FY2010.

[iii]: This is the FY17 enacted number. The FY18 number will not be known until the breakdown for Development Assistance funding is determined by USAID.

[iv]: Funding for USAID’s Conflict Management and Mitigation (CMM) core budget has suffered significant reductions since 2010. It is now at almost a third of its former $9 million. Funded through Development Assistance, report language should be included to restore CMM’s core budget to no less than $6 million.

[v]: $77.6 million for Transition Initiatives meets the funding number passed in the House version of the FY17 State, Foreign Operations and Related Programs bill as well as past White House and PPWG requests.