Afghanistan still depends upon foreign assistance for its survival. Even Taliban leadership has acknowledged that Afghanistan will require international development aid moving forward. 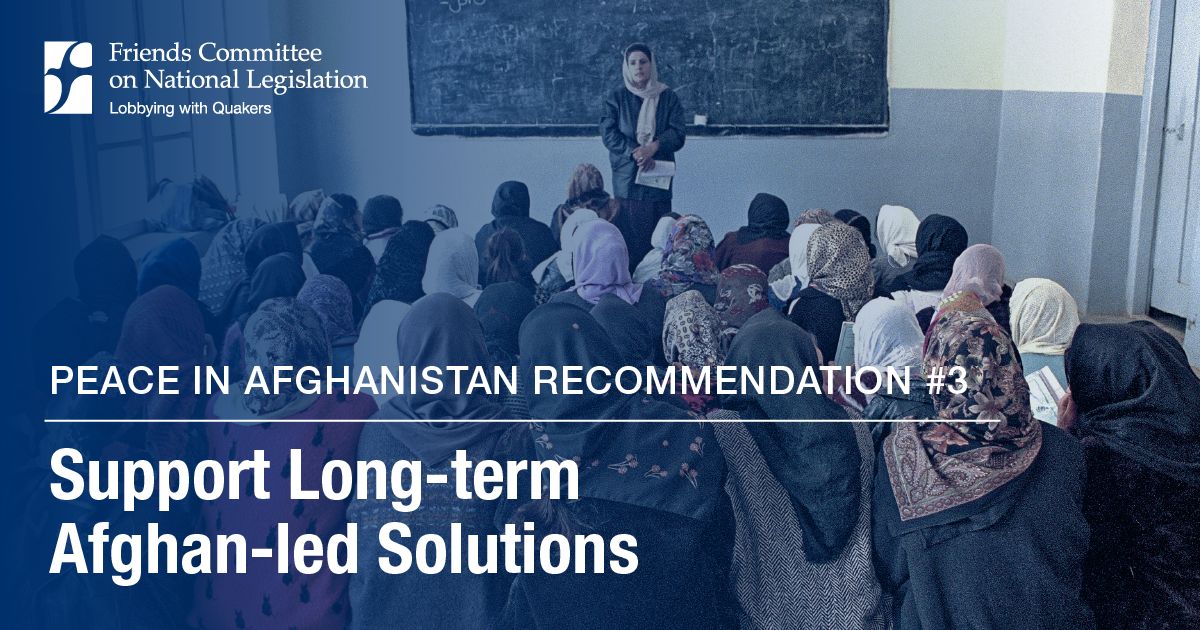 Interestingly, it was not the withdrawal of Soviet troops but the cessation of Soviet aid that led to the dissolution of then-President Mohammed Najibullah’s regime.1

Thus, U.S. economic and development assistance remains a key avenue for supporting lasting peace in Afghanistan even after troops are fully withdrawn. This support is especially critical as the novel coronavirus pandemic spreads across the globe, exacerbating the suffering of the Afghan people.

However, it is important to acknowledge that development assistance can also cause harm. As the Washington Post’s Afghanistan Papers tell us, prior U.S. development efforts in Afghanistan have entailed:

“flood[ing] the fragile country with far more aid than it could possibly absorb. During the peak of the fighting, from 2009 to 2012, U.S. lawmakers and military commanders believed the more they spent on schools, bridges, canals and other civil-works projects, the faster security would improve. Aid workers told government interviewers it was a colossal misjudgment, akin to pumping kerosene on a dying campfire just to keep the flame alive."

A human rights worker in Afghanistan said the country “is in many ways a perfect case study of how not to give aid.”

The United States should make a long-term development commitment to Afghanistan that reflects local priorities, strengthens local ownership, and promotes oversight and accountability by

Pouring too much aid too quickly into Afghanistan has heightened corruption and violence. This has weakened the Afghan government and strengthened the Taliban’s hand. Studies demonstrate that a large-scale approach in conflict zones results in minimal, if any, economic or political progress.

Smaller, more tailored programs that reflect local priorities, are focused on local needs, and are implemented by local partners have a much better record of success.

Putting development professionals in the lead

In Afghanistan, USAID has been directed by the State Department and the Pentagon—often against the better judgment of development professionals—to focus its efforts on big, flashy projects that Afghans are unable to sustain or do not need.

Moreover, much of the spending has been administered by military officials and units with little knowledge and understanding of development principles and best practices. U.S. assistance to Afghanistan should be designed to achieve meaningful development objectives, overseen and managed by development professionals, and evaluated according to its development impact.

Too much of U.S. assistance to Afghanistan has been lost to waste, fraud, and abuse. Moreover, because aid has been routed through U.S.-based companies and organizations, a large portion of it has been eaten up by security costs, reducing amounts that directly benefit the Afghan people. Small cash transfers directly to households have proven quite successful in stimulating economic growth and protecting vulnerable populations in many countries around the world.

To ensure that funds are reaching those who need it and are achieving their intended goals, the administration should make aid flows fully transparent not only to Congress and the American people but also to the Afghan government and intended beneficiaries, and ensure they are subject to rigorous monitoring and evaluation standards.

Smaller, more tailored programs that reflect local priorities, are focused on local needs, and are implemented by local partners have a much better record of success.

For too long, the United States has allowed its economic and military assistance to fuel corruption in the name of shoring up the war effort and supporting the Afghan government. There has been tremendous pressure on U.S. agencies to spend large amounts of money in order not to lose their future budgets, which has resulted in poor oversight over who was receiving the money and what they were doing with it.

Instead of mapping out the kleptocratic networks and taking care to avoid bolstering them, successive U.S. administrations have turned a blind eye to the funds flowing to the Taliban, terror groups, and corrupt officials. This has built resentment among the Afghan people toward both the Afghan government and the United States, undermining the prospects for achieving a stable peace.

Economic assistance is a key point of leverage, as Afghanistan requires external support to survive. Yet the United States has thus far been hesitant to condition aid on certain outcomes or to push for accountability through its assistance. Any direct support to the Afghan government should be conditioned on progress toward outcomes such as protections for women and girls in the spirit of the Afghan constitution; security sector reform; disarmament, demobilization, rehabilitation, and reintegration (DDRR) for former fighters; good governance; and the rule of law.

Congress should use the full extent of its oversight authorities to consistently examine the efficacy and impact of assistance programs, investigate fraud, and adjust accordingly.15 At the same time, Congress should remove the incentives for USAID and other agencies to spend money too quickly and to fabricate success stories in order to preserve their future budgets and justify their continued work.

Without aggressive oversight to ensure that American dollars are actually getting to the right places, the Special Inspector General for Afghanistan Reconstruction (SIGAR) warns that our “programs will at best continue to be subverted and at worst will fail.”

More than 60 nations have contributed to post-9/11 development efforts in Afghanistan. Thus, an aim of U.S. diplomacy should be working multilaterally with other donor nations to leverage aid to Afghanistan in support of outcomes furthering peace and stability. With so many regional actors playing a role in Afghanistan’s economy and society, not to mention their influence upon one another (such as China’s leverage over Pakistan), the U.S. must recognize that unilateral efforts to tailor and condition aid are much less likely to succeed than multilateral agreements on shared goals.