Yesterday, for the first time, the house voted to repeal the 2001 Authorization for the Use of Military Force (AUMF) and end 18 years of war. The measure, sponsored by Rep. Barbara Lee (CA-13), was included in the Department of Defense Appropriations Act (H.R. 2968). In the coverage that follows, few newspapers are likely to report that a 76-year-old Quaker lobby has done the careful, long-term work to end a war that has spread to 19 countries. 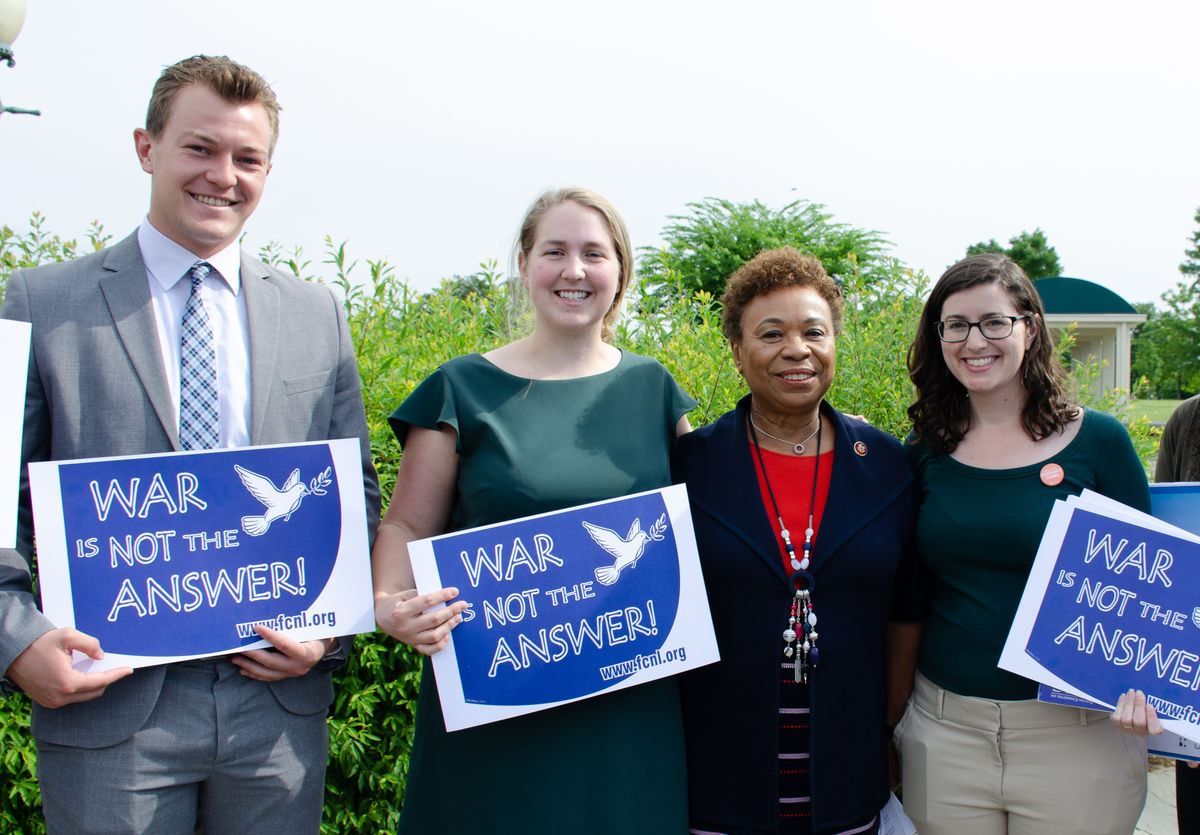 Quakers and friends with Rep. Barbara Lee, author of the amendment to repeal the 2001 AUMF.

For the last six months, FCNL has put its lobbying power on Capitol Hill and its most powerful grassroots muscle behind repeal of the 2001 AUMF. On the Hill we worked with Rep. Lee to support introduction of the repeal bill. This year, FCNL Advocacy Teams and grassroots lobbyists across 40 states visited Congressional offices to press for repeal.

We have worked tirelessly across party-lines, and with veterans groups, humanitarian agencies, and with many other faith partners to secure this important victory for peace.

But this effort didn’t start in January 2019.

Right after 9/11 FCNL released this important statement, declaring “war is not the answer.”

The strength of the Friends Committee on National Legislation, and the Quaker lobbying community around the country, is that we are prophetic in what we believe, we are persistent in how we advocate and, as yesterday’s vote shows, we are powerful in what we get done.

Then we worked with Friends in Georgia and across the country to distribute more than two million signs and bumper stickers echoing that iconic phrase. “War is not the answer” became a New York Times crossword puzzle clue, was featured on the cover of the New Yorker, and ultimately came under attack from supporters of the expanding wars.

As a matter of Faith, the Friends Committee also recognized that our community could not just be against war, we needed to be in favor of preventing deadly conflict.

Out of this realization came our focus, and dedication of resources to the peaceful prevention of deadly conflict. We expanded our staff and built a coalition of peace, humanitarian, development, and refugee groups that worked to advance U.S. government efforts to prevent conflicts before they start. We saw the fruits of this effort begin to show when congress passed the bipartisan Eli Wiesel Genocide and Atrocities Prevention Act, and President Donald Trump signed it in to law in January 2019.

We’ve also worked consistently to repeal the 2001 AUMF, supporting legislation sponsored by Reps. Lee, Adam Schiff (CA-28), and many others that have come to a vote. In 2015, we dedicated FCNL’s Spring Lobby Weekend—an event that brings hundreds of young leaders to Washington, D.C. to lobby Congress—to the issue and we’ve consistently mobilized our lobbyists and grassroots to press for action.

The strength of the Friends Committee on National Legislation, and the Quaker lobbying community around the country, is that we are prophetic in what we believe, we are persistent in how we advocate and, as yesterday’s vote shows, we are powerful in what we get done.

None of this would be possible without the steadfast support of advocates and donors around the country. Our smart and focused lobbyists on Capitol Hill can track legislation, provide advice, and offer strategic insights to members of Congress and their staff. But the power of our advocacy comes from our grassroots—thousands of advocates around the country who send message to Congress, visits Congressional offices, and donate money to make all of this possible.