Join a Special Screening of "An Endless War? Getting Out of Afghanistan"

Nearly 18 years after U.S. forces invaded Afghanistan in the wake of 9/11, the Afghan conflict has become America’s longest and costliest war. Yet today, the Taliban is stronger and controls more territory than at any time since 2001. 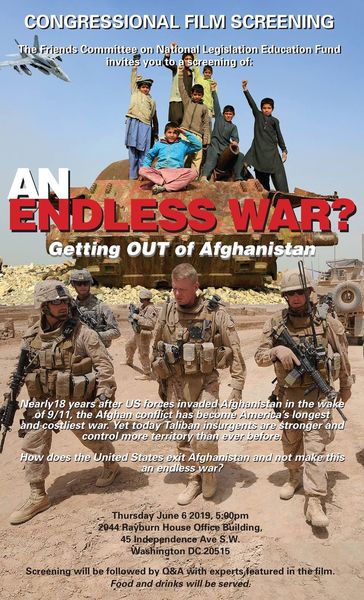 We are committed to ending war and the threat of all war. That's why I am excited to share this special opportunity with you.

Please join me for a screening of the 2019 film, "An Endless War? Getting Out of Afghanistan," sponsored by the FCNL Education Fund. The event will take place on Thursday, June 6 at 5:00 p.m EDT in the Rayburn House Office Building. Food and drinks will be served.

The film features interviews with former commanding officers of the U.S. military, veterans, political analysts, and peace activists—including FCNL’s own Shukria Dellawar, Legislative Representative for the Prevention of Violent Conflict. It deconstructs the reasons the war has failed and explores how the conflict can be ended.

The screening will be followed by a discussion with the filmmaker and experts featured in the film.

I hope to see you there!