On Nov. 4, President Trump started the year-long process of withdrawing the U.S. from the Paris Climate Agreement. This landmark agreement addresses global climate change through adaptation efforts, climate finance, and the reduction of greenhouse gas emissions. The U.S. will no longer attempt to meet emissions reduction targets, nor contribute to the Green Climate Fund, which helps developing countries adapt to climate change.

The U.S. will not formally exit until Nov. 4, 2020, one day after the presidential election. If a new administration wants to recommit to the Paris Agreement, it could do so at that time after 30 days’ notice.

Sens. Christopher Coons (DE) and Mike Braun (IN) officially formed a bipartisan Climate Solutions Caucus in the Senate this month. The caucus hopes to reset the conversation about climate change, which Sen. Coons characterizes as “the most pressing issues of our time.” Six senators joined the caucus this week, bringing the total membership to eight.

There are currently 8 senators in the Climate Solutions Caucus.

Wildfires Rage in California
Thousands of people were displaced by fires in California this month. Entire communities were left without power as utility companies attempted to slow the spread of the wildfires. California’s fire season is growing longer, deadlier, and more destructive—direct consequences of the hotter temperatures, earlier snow melts, and drier conditions brought about by climate change.

IMF Says Tax of $75 per ton of Carbon Needed to Limit Warming
A new report by the International Monetary Fund (IMF) found that a carbon tax of $75 per ton of carbon dioxide would need to be implemented by 2030 in order to limit global warming to 2 degrees Celsius. The report advises that the revenue generated by the tax should be directed to such efforts as offsetting high-energy costs for households and clean energy innovation.

EPA Releases New Data on Air Pollution
An analysis of Environmental Protection Agency (EPA) data by Carnegie Mellon University shows that worsening air quality may have led to 10,000 premature deaths in the U.S. between 2016 and 2018. This is a reversal of a decades-long trend towards cleaner air.

Trump Plans to Roll Back Coal Ash Rule
The Trump administration is expected to roll back a regulation meant to limit contamination from coal ash, a toxic residue produced from burning coal. The revision of the Obama-era regulation allows coal plants to relax their inspection, monitoring, and toxic level standards, thus increasing the likelihood of future water contamination. 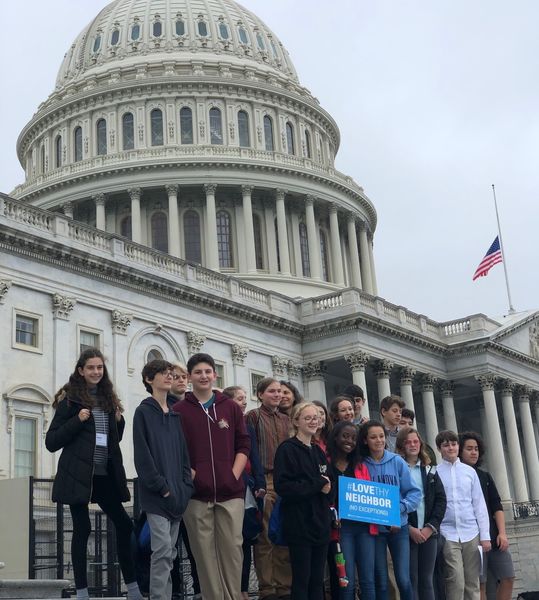 Friends Central School students on the steps of the Capitol after a long day of lobbying. Emily Sajewski / FCNL

Action Alert
Disappointed in the administration's decision to withdraw from the Paris Climate Agreement? Write a letter-to-the-editor in your local paper! Contact media@fcnl.org if you're interested.