The federal budget determines when and how the government spends your tax dollars. Here's what you need to know.

Meetings and decisions of subcommittees in the Senate and House, to allocate money to specific programs for the next fiscal year. The process must be completed by October 1 or federal departments will not be able to spend any funds.

Congressional committees that design and oversee the creation of or changes in federal programs and benefits. These committees work throughout the year and advise the budget committees of their program priorities and needs. (See “reconciliation”)

The total amount of money Congress allows a federal agency to commit to spend. For example, $10 million is appropriated for building a new embassy. The project would have $10 million in budget authority, but the money might not actually be spent (outlays) until the following year, when the embassy is actually constructed.

Major categories in the federal budget organized by the purpose of spending. Examples include military, health care, law enforcement, and environment. Spending limits in the budget resolution (known as 302a allocations) are organized by budget function.

Submitted by the president by the first Monday in February, the budget proposal is compiled by the White House Office of Management and Budget (OMB). It provides an initial glimpse of the administration’s priorities for the coming fiscal year.

This is a relatively simple document consisting of a set of numbers stating how much Congress is supposed to spend in each of the 19 budget functions (see below) and how much total revenue the government plans to collect over the next five years.

This legislation maintains temporary funding to agencies and programs until the regular appropriations bills are enacted.

The difference between outlays (actual spending) and revenue (actual income) in any given fiscal year.

Also known as appropriated spending. This funding falls under the jurisdiction of the House and Senate Appropriations Committees. Funding must be renewed each year to continue operation. Almost all military spending is discretionary, as are budgets for health research, K-12 education, and housing. Discretionary programs make up about one-third of all federal spending. Mandatory spending accounts for the rest.

This term refers to a provision, usually in a deficit reduction scheme, that imposes separate levels of spending cuts on security or defense spending and on non-defense or non-security. For example a provision that requires $1 trillion to be cut from discretionary spending could have a firewall requiring half of the cuts to come from Pentagon and related accounts and half to come from other accounts.

Firewalls ensure that at least some portion of planned spending cuts must come from the military budget, and protect domestic and non-military foreign aid programs from the full brunt of the cuts. On the other hand, firewalls also prevent savings from budget reductions on one side of the firewall from being spent on the other side of the firewall; that is, cuts in military spending could not be used to support education or environmental protection. On balance, especially in the current political environment, protecting domestic programs from bearing the full brunt of budget cuts is the highest priority.

Spending that is already obligated, either to individuals, as in entitlements, or through other types of obligations, such as interest on the federal debt.

Expenditures that actually flow out of the federal treasury in a given year.

Reconciliation was intended as a deficit-reduction mechanism, but is also used to pass costly tax-cutting legislation as well. The bill typically includes multiple provisions that affect federal revenue and spending. It is the only kind of legislation that cannot be filibustered on the Senate floor, so it can pass by majority vote.

Revenues that the government forgoes through the provisions of tax laws that allow for deductions, exclusion, or exemptions from the taxpayers otherwise taxable income, or the deferral of tax liability to a later time, or preferential tax rates for certain kinds of income.

Background How Does the Federal Government Budget? › 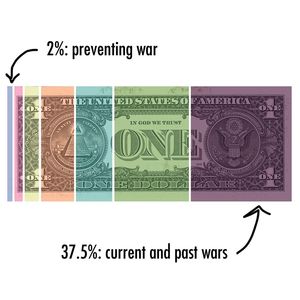 The federal government's budget process rarely matches the ideal. But the ins and outs of authorizing and appropriating funds often shape the money that gets spent. And that affects people's lives.