FCNL is committed to lifting up an alternative U.S. foreign policy that builds sustainable peace, respects human rights, and prevents atrocities and conflict. As we have for over a decade, FCNL joined with members of the Prevention and Protection Working Group to urge Congress to robustly fund peacebuilding in the fiscal year 2021 budget.

Dear Members of the House and Senate Committees on Appropriations:

As members of the Prevention and Protection Working Group, we urge you to support robust funding in the Fiscal Year 2021 State Department, Foreign Operations and Related Programs appropriations bill for programs to prevent and reduce violent conflict.

We know that peacebuilding and conflict prevention mechanisms not only cost significantly less than military intervention and conflict response, but also are more effective in reducing instability and protecting lives. Research by the Institute for Economics and Peace found that each dollar invested in peacebuilding saves $16 in the costs of violence, including military spending.

Your continued support of robust diplomatic and development funding remains critical to the full implementation of the Elie Wiesel Genocide and Atrocity Prevention Act of 2018 and the Global Fragility Act of 2019. The White House’s FY21 Budget request would impose a drastic 22% reduction in funding for the overall International Affairs Budget, which would severely hinder U.S. efforts to prevent and reduce violent conflict. We very much appreciate your bipartisan leadership in rejecting the dramatic and devastating cuts proposed in FY19 and FY20. We urge you to maintain overall funding levels at no less than $60 billion in base funding for the State, Foreign Operations, and Related Programs appropriations bill for FY21.

Accordingly, we urge your support for the following peacebuilding-related accounts at the funding levels listed. It is essential that funding for the prevention of violent conflict not come at the expense of other effective humanitarian and development funding. 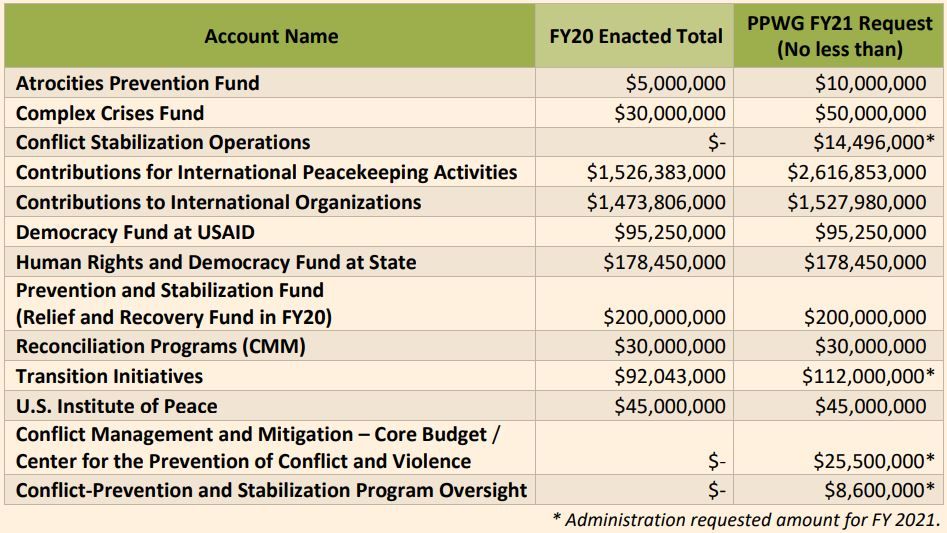 Thank you for your continued support and leadership for the critical work of the State Department and USAID that serves to promote American interests, prevent conflict, build peace and save lives.