It was one year ago on Oct. 2 that Jamal Khashoggi was brutally murdered by agents of the Saudi Arabian government. In memory of the Washington Post journalist, advocacy groups held a press conference in front of the Saudi Embassy, demanding justice and calling on the U.S. to reevaluate its relationship with Saudi Arabia. Our Middle East lobbyist, Hassan El-Tayyab, delivered the following remarks at the event:

“A year ago today, Jamal Khashoggi walked into the Saudi consulate in Istanbul, Turkey and disappeared. The international community condemned this brutal murder, and the Senate voted to lay the blame at the feet of Crown Prince Mohammad Bin Salman. 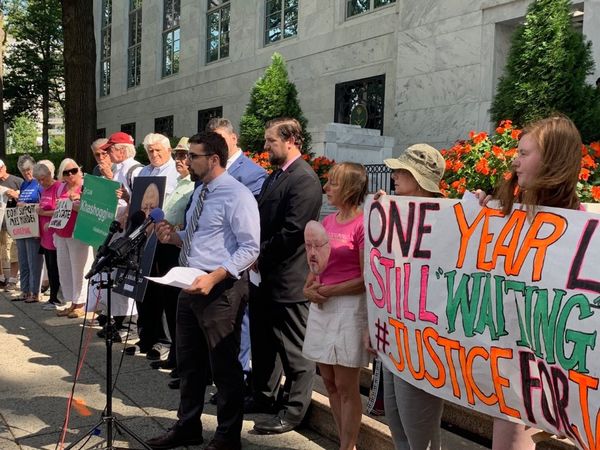 Hassan El-Tayyab delivers a speech in front of the Saudi Embassy. Codepink

“But Khashoggi’s death uncovered another untold story for many Americans—the story of the ‘forgotten war in Yemen,’ and U.S. participation in that conflict. I think it’s fair to say that Khashoggi’s murder did what the death of over 100,000 Yemeni children could not do: Get the U.S. media to cover the human rights abuses committed by Saudi Arabia.

“For the past five years, the Saudi-UAE coalition’s war in Yemen has created the world’s worst humanitarian crisis, leaving 14 million people on the brink of famine and 1.3 million people suffering from cholera. Saudi Arabia and the United Arab Emirates have blockaded Yemen’s ports and cut off the flow of food, fuel, medicine, and clean water. They have conducted air strikes on schools, hospitals, weddings, and economic and agricultural infrastructure.

“By using starvation as a weapon and undermining Yemen’s economy, health care, and educational systems, bin Salman has proven himself to be a ruthless monarch—not the progressive reformer that the Western press have painted him. He has found an ally in the Trump administration. The U.S. has provided support via bomb sales, targeting assistance, and spare parts transfers that help keep the Saudi-UAE fleets in the air.

“In the past year, though, much has changed. Khashoggi’s murder shed light on the forgotten war and helped open eyes to the suffering in Yemen. The situation remains bleak for millions, but there is now reason to believe in peace. A key victory came when Congress made history in April by passing the Yemen War Powers Resolution (SJ Res 7), which ended unauthorized U.S. military involvement.

Congress must send a clear signal to the executive branch that unconstitutional participation in Yemen must stop. By doing so, they can bring justice to both Yemen and Jamal Khashoggi.

“By invoking the War Powers Act for the first time since 1973, Congress pressured the Trump administration to stop the mid-air refueling of Saudi and UAE warplanes. It helped get all sides fighting in the war to agree to discuss a realistic peace process. On the very same day that the Senate passed the Yemen War Powers Resolution, UN Special Envoy to Yemen Martin Griffiths secured a ceasefire agreement in the city of Hodeida—the largest port in the country and the main supply line for aid to millions of people. The ceasefire in Hodeida is fragile, but the passage of the War Powers Resolution created room for peace talks and is actively saving lives. It could lead to the end of the war.

“Unfortunately, Trump vetoed the Yemen War Powers Resolution. But Congress now has another historic opportunity to end the war. In the coming weeks, we expect House and Senate leaders to decide which Yemen-related amendments will stay in 2020 National Defense Authorization Act (NDAA). We are urging Congress to use this must-pass bill as an avenue to end our participation in this brutal and illegal war.

“Congress has the power to end U.S. complicity in war crimes in Yemen. They must send a clear signal to the executive branch that unconstitutional participation in Yemen must stop. By doing so, they can bring justice to both Yemen and Jamal Khashoggi.”

Right now, we have a unique opportunity to end two wars and prevent a new one from starting.