Returning from the 10-day Washington Summer Intensive, FCNL’s 20 Advocacy Corps organizers knew they would be faced with the difficult task of advocating for legislation to end gun violence. But they didn’t know that within days the issue would tragically return to the front pages after a terrible round of mass shootings in El Paso and Dayton. 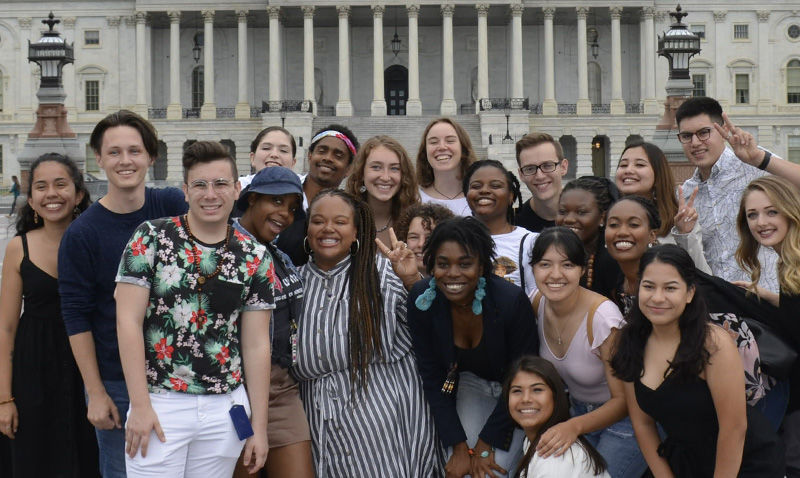 At Jackson State University in Jacksonville, Alabama, organizer Natalie Walls was interviewed on her local radio station. In a half hour, she kept returning to the theme that addressing gun violence is not a partisan issue.

Speaking with the Conway Daily Sun in New Hampshire, Fiona Davis-Walsh made the point that that while mass shootings make headlines, in the U.S. they account for only about five percent of total gun deaths. "The vast majority of deaths by guns are by suicide, interpersonal violence, and domestic violence," she said.

Walls and Davis-Walsh, along with 18 Advocacy Corps members, spent a week at the FCNL’s Quaker Welcome Center in Washington meeting with lobbyists, congressional staff, and experts. Highlights of the week included briefings from March for Our Lives, the Community Justice Action Fund, and emergency room nurse Tanvi Avasthi.

Avasthi pointed out that communities of color are especially affected by gun violence. Rep. Lucy McBath (GA-06), whose son was killed in a shooting, and Sen. Chris Murphy (CT) recorded special video briefings for the organizers.

The ten-month long Advocacy Corps program is a key part of FCNL’s program to tap the energy, innovation, and experience of young people to change federal policy. FCNL’s Five-Year Forward Plan specifically calls on our community to cultivate a new generation of social justice advocates who can affect change in Congress.

This year, FCNL recruited Advocacy Corps organizers from states such as Alabama, Mississippi, Arkansas, Texas, and Florida where gun violence can be a polarizing issue. However, persistence is the key.

The ten-month long Advocacy Corps program is a key part of FCNL’s program to tap the energy, innovation, and experience of young people to change federal policy.

In her first month back home, organizer Lauren-Elaine Brown was having trouble scheduling meetings with her local representative in Dallas. So she just dropped by his office with other constituents.

After several visits she successfully organized a lobby visit and is now organizing a group of high school students to work on this issue.

After Clare Carter returned home from the Washington Summer Intensive, she organized a lobby training using FCNL’s materials and brought six people into the Knoxville office of Sen. Marsha Blackburn (TN). Organizer Juan Avila, whose family is originally from Mexico, is using a Spanish version of FCNL’s legislative “leave behinds” to train his friends and family in New Mexico to advocate on gun violence. Avila has already recorded a video interview with the biggest newspaper in New Mexico, the Albuquerque Journal.

Next steps for all Advocacy Corps organizers are to bring more people into congressional offices to press for commonsense legislation to expand background checks and take guns out of the hands of individuals who could hurt themselves or others. Advocacy Corps coordinator Larissa Gil Sanhueza said that while this will be hard, she is confident that the 20 organizers have the training and energy to make this happen.

"I'm really interested in holding open, honest conversations with folks of all different perspectives on this," said Davis-Walsh in the Conway Sun. "There should be an aggressive federal response that includes rigorous and universal background checks on gun purchases and an assault weapons ban… It doesn’t have to be this way, and we must not accept this as normal. We owe it to every victim of gun violence."