This has been an inspiring time in Washington, D.C.! We have been riveted by our baseball team, the Washington Nationals, who unexpectedly made it into the playoffs and won the World Series! I became a big fan of this team. That they won and that I became so invested is testament that change can happen. 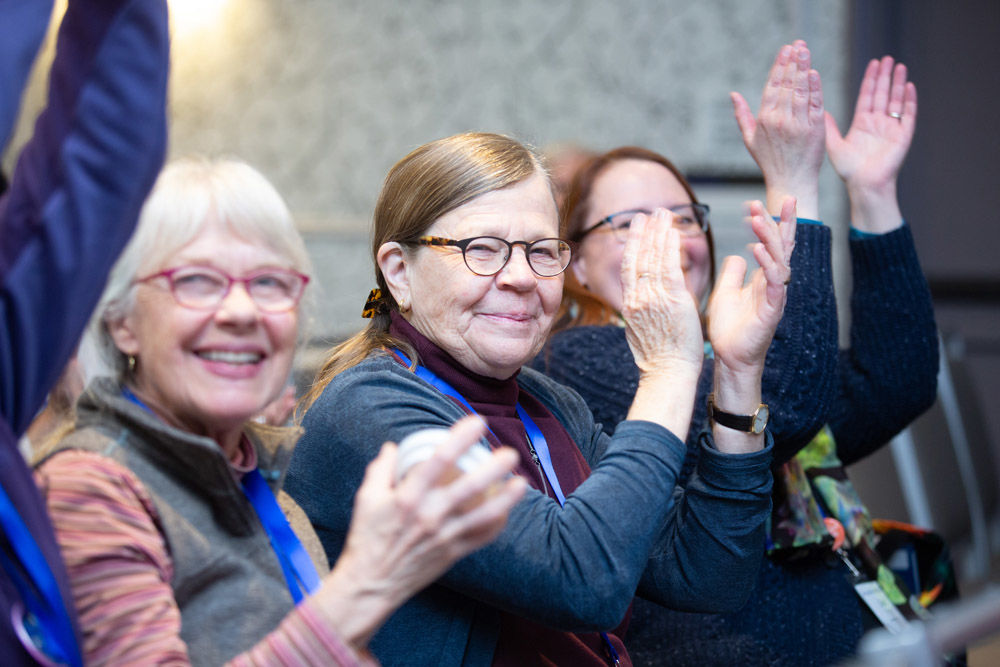 During the playoffs, the slogan the Nationals fans used to cheer on the team was #stayinthefight. At FCNL, we avoid “fighting” language as an aspect of our peace testimony. But a Friend who was also following the World Series reminded me that the Quaker version might be #stayintheLight. I see our work at FCNL to do both: #stayinthefight for policies that promote peace and justice and #stayintheLight to be guided by our Quaker faith and practice.

Change is happening, and for many in this country, it can’t come soon enough.

As we gather today, I am reminded that FCNL’s annual meeting has a tradition of coming together at singular moments of political change—from Barack Obama’s historic 2008 election to our 2016 gathering, three days after the election of Donald Trump. This year we gather as Congress considers impeachment of the president.

Friends, change can happen. In 2018, we convened shortly after the mid-term elections brought unprecedented change and diversity to Congress with 40 new members elected to the House of Representatives— many of them women and many who had never held elected office.

Change is happening. Advocates around the country— particularly young people—are leading in the fight for DACA, holding climate strikes across the globe, speaking truth to power about the devastating effects of gun violence, and demanding action by elected officials. Seeing their futures in peril, they are claiming their right to life, liberty, and the pursuit of happiness. They are bringing change to our communities across the world.

Change is happening, and for many in this country, it can’t come soon enough. We see more and more people called to run for office—at the local, state and national levels; to work for political campaigns; to assert their participation in government beyond simply voting—but to advocate with their elected officials persistently—and that’s where you come in.

You are making change; you are exercising the muscles of democracy by calling on our Congress to repeal the outdated 2002 Authorization for the Use of Military Force.

You are making change; you are exercising the muscles of democracy by calling on our Congress to repeal the outdated 2002 Authorization for the Use of Military Force. It is a step toward peace.

The testimony of early Friends to not fight or carry weapons—which undergirds all FCNL’s work for peacebuilding, disarmament, diplomacy, ending militarism, and promoting human rights—continues to be deeply meaningful today. It reflects those early Friends’ understanding that the basis of life in the Spirit could be captured in the admonition of Jesus that we are to love our enemies.

In other words, “Love Thy Neighbor (No Exceptions).”

Doing so is not always easy. We are in a moment in which Congress is probing how well the founding document of these United States, the Constitution, works. It is fundamental for us at FCNL to promote good governance and the rule of law. When laws are unjust and government actions cause injustice, we seek to change those laws through our advocacy. Congress must act to reassert its war powers authority and set us on a path towards global peace and stability. Failing to do so only weakens our democracy.

I am so grateful for this community of people dedicated to ending war, building peace, and advocating for a more just society, and for an earth restored. It is this advocacy of our community; it is the inspiration of my faith to love my neighbors without exception, that helps me #stayinthefight and #stayintheLight. It is the dedication of advocates who persistently join with FCNL to faithfully advocate that gives us confidence that change can happen.

This article was excerpted from Diane Randall's remarks to the FCNL Annual Meeting on Nov. 14, 2019.