The $1 trillion package of FY2020 spending bills that passed the House in June contained important victories for reining in the aggressive and militaristic U.S. approach to national security.

Although the total amount approved for the Pentagon--$733 billion--remains unconscionably high, the bill includes provisions that would remove the authority for endless wars, terminate U.S. support for the Saudi-led war in Yemen, cut funding for researching and deploying certain “low-yield” nuclear weapons and ground-launched medium-range missiles, and increase funding for peacebuilding.

These successes would not have been possible without the concerted efforts of advocates like you.

The House Appropriations Committee started the string of successes by adopting an amendment offered by Rep. Barbara Lee (CA-13) to repeal the law that has been used as a blank check for endless war: the 2001 Authorization for the Use of Military Force (AUMF).

Three weeks later, the full House made history by passing the mammoth spending bill with Lee’s provision intact – marking the first time that either chamber of Congress has ever approved repealing the 2001 AUMF. If enacted, this provision would repeal the 2001 AUMF eight months after the annual funding bill goes into effect.

Three provisions were included in the spending package that would end U.S. complicity in the Saudi-led war in Yemen. That war, which has not been authorized by Congress, is largely responsible for creating the world’s worst humanitarian crisis. At least 85,000 Yemeni children under the age of five have died from hunger and disease, and half the total population of the country remains at risk of famine. More than a million Yemenis are believed to have been infected with cholera since the epidemic began in 2017.

The House Appropriations Committee rejected funding for the so-called “low-yield” W76-2 nuclear warhead for submarines. This unnecessary weapon would increase the risk of miscalculation and wider nuclear use, and Former Secretary of State George Shultz and the late Senator Richard Lugar called it “dangerous, unjustified and redundant.” On the House floor, Rep. Liz Cheney (WY-01) tried to restore this funding, but her amendment was rejected by a vote of 192-236.

The defense spending bill also emerged from committee zeroing out funding for new intermediate-range missile systems that would violate the Intermediate-Range Nuclear Forces (INF) Treaty, from which the administration has announced plans to withdraw. A House floor amendment by Rep. Michael Gallagher (WI-08) to restore $96 million in research and development funds for these intermediate-range weapons was defeated 203-225.

The spending package included funding for the State Department and U.S. Agency for International Development at much higher levels than the president requested. Twelve specific accounts that support conflict prevention and peacebuilding – including the Complex Crises Fund, Contributions for International Peacekeeping Activities, and the U.S. Institute of Peace – were allotted a total of $800 million more than last year, and $1.8 billion more than the administration requested this year.

A string of amendments to cut overall funding for programs to promote peace, end hunger, prevent disease, and protect the planet – and the professionals who support them – were defeated by wide, bipartisan margins. 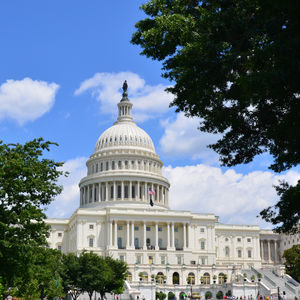 Washington has been a buzz of activity recently. While the news headlines may sound dour and dim, there were several major legislative victories on Capitol Hill.