When asked what would be most effective in creating long-term peace, most Americans favor diplomacy and policy solutions over military intervention. The new Congress should heed constituent voices and invest in peacebuilding.

The members of the 116th Congress will enter office as the world is experiencing a 25-year peak in violence. The wars in Syria and Yemen, the spread of violent extremism across Africa, and high levels of violence in Central America are taking a harsh humanitarian and economic toll.

Will the 116th Congress respond by pursuing military action that has failed to reduce terrorism and conflict? Or will it recognize, as most Americans do, that violence begets violence?

The inaugural Peace Perceptions Poll, conducted by International Alert and the British Council in collaboration with global polling agency RIWI, found that Americans rank “dealing with the reasons people fight in the first place” as the most effective among measures to bring about peace, far above military intervention. “Supporting societies and communities to resolve conflict peacefully” came second, followed by “negotiating peace agreement with political leaders” and “having democratic elections.” In total, 82 percent of respondents favored preventive and peaceful solutions to violence.

Contrast that with the use of military force. Only 8 percent of Americans polled preferred “using military to address violence,” and 9 percent thought “assistance of international security forces” was most effective. Undeniably, Americans want to invest in peace. Congress should take heed.

Americans are not alone. The poll shows that people around the world think a peaceful approach to resolving conflict is best. That includes respondents in Syria, Lebanon, and other major recipients of U.S. security assistance. 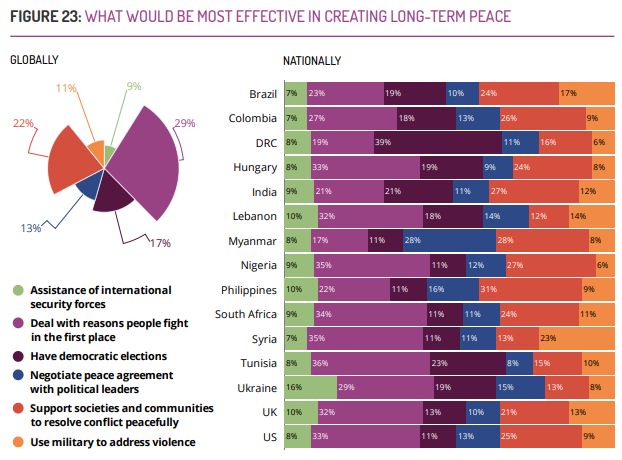 Historically, the United States has relied primarily on military solutions that exacerbate violence. With these results, Congress should recognize that it is time to change course by increasing diplomacy and development funding.

Earlier this year, a bipartisan coalition of representatives and senators took a step toward peace by introducing the Global Fragility and Violence Reduction Act (H.R. 5273, S. 3368). If passed, the bill would strengthen the capacity of the United States to address root causes of violence by developing a long-term, government-wide prevention strategy. This legislation is a positive step forward, and Congress should back it up by increasing funding for peacebuilding and conflict prevention.

Our leaders have an opportunity to demonstrate U.S. leadership and deliver what American voters want. We ask our legislators to listen to the American public and invest in peace.