As members of the Prevention and Protection Working Group,* we urge you to support funding that works to prevent and reduce violent conflict throughout the Fiscal Year 2020 appropriations process.

We are concerned about the White House FY20 Budget, which amounts to a 24 percent reduction in funding for the overall International Affairs Budget. We very much appreciate your bipartisan leadership to push back against dramatic and devastating cuts in FY19. We urge you to maintain overall funding levels at no less than $60 billion for the State, Foreign Operations, and Related Programs appropriations bill for FY20.

The final report of the bipartisan Task Force on Extremism in Fragile States affirms the importance of diplomacy and development to U.S. security. It concludes that to reduce the threat of terrorism and extremism to the United States, we need a preventive strategy. Diplomatic and development programs are crucial to preventing violent extremism, [i] as well as other forms of destabilizing violence.

Investing in prevention mechanisms through diplomacy and aid dollars will make the United States safer and reduce costs associated with expensive military interventions. Your continued support to address root causes of conflict through robust diplomatic and development funding remains critical. 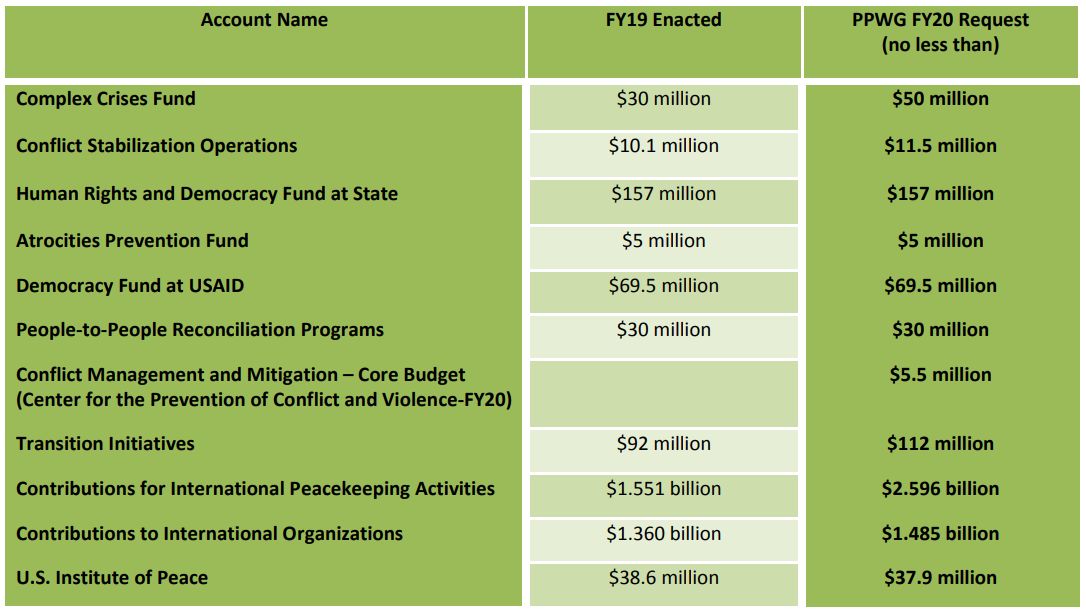 The Complex Crises Fund (CCF) enables the U.S. Agency for International Development (USAID) to prevent and respond to unforeseen crises and conflicts. It’s the only account of its kind, filling immediate, short-term gaps for which there would not otherwise be resources. CCF is in high demand and has directly supported initiatives to prevent mass atrocities in collaboration with the Atrocities Prevention Board. It has been utilized in places like Jordan, Lebanon, Ukraine, Libya, Somalia, Nigeria, Bangladesh, and the Philippines. We urge no less than $50 million for CCF, and that this funding be allocated to USAID.

The Conflict Stabilization Operations account supports the work of the Bureau of Conflict and Stabilization Operations (CSO) at the Department of State. CSO is a vital part of U.S. efforts to be more effective in preventing and reducing violent conflict. CSO works with partners to break cycles of violence, strengthen civilian security, and mitigate crises in priority countries in support of U.S. national security interests. The Bureau also serves as the hub for the State Department’s atrocities prevention work, providing dedicated expertise, analysis, planning, and coordinating in support of priorities of the Atrocities Prevention Board. We urge no less than $11.5 million for CSO, and that this amount be specified in the language of the bill.

In the FY2020 State, Foreign Operations, and Related Programs appropriations bill, we also urge recognition and expressed support for funding of unarmed civilian protection, which is a proven strategy for the protection of civilians, localized violence reduction and supporting local peace infrastructures, in which unarmed, trained civilians live and work with local civil society in areas of violent conflict.

Finally, we urge that funding for the prevention of violent conflict not come at the expense of other effective humanitarian and development funding. Thank you for your continued support and leadership for the critical work of the State Department and USAID that serves to promote American interests, advance global security, and save lives.