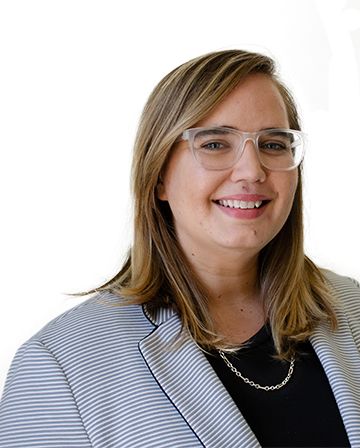 Ashley Wilson is FCNL’s Grasstops Advocacy Manager. As part of the strategic advocacy team, she supports the lobbying efforts of individuals who have – or are poised to develop – strong relationships with Members of Congress.

Prior to joining FCNL, Ashley served as the Communications Manager for NETWORK Lobby for Catholic Social Justice. She coordinated digital and traditional media strategy for advocacy campaigns on taxes, poverty, health care, the federal budget, and more. She served as a lobbyist during the 2012-2014 push for comprehensive immigration reform. Ashley was integral in organizing five of NETWORK’s signature “Nuns on the Bus” trips.

Ashley graduated from Saint Joseph’s University in Philadelphia with a degree in political science and concentrations in faith justice studies and sociology. She was a member of the 2016-2018 Contemplative Leaders in Action Cohort, which focuses on Ignatian spirituality and leadership. Ashley also served on the National Advisory Council for the Ignatian Solidarity Network from 2015-2017.

Ashley is originally from New Jersey and lives in Washington, D.C. In her free time, she enjoys baking bread, tweeting, and traveling internationally.

Update How to Talk Faith and Politics with Congress ›

Our advocacy is rooted in the conviction that a better world is possible. As people of faith and conscience, we bring our deeply held beliefs into our work for policy change, and we know how important and powerful it can be to frame our advocacy in the language of our faith.