Contrasting Use of Power

I was deeply moved to visit the Supreme Court last Sunday, along with hundreds of others paying tribute to Justice Ruth Bader Ginsburg. The mood was solemn and reverent for this woman who let her life speak—as an attorney working for civil rights, as a Supreme Court Justice, and as a family woman. 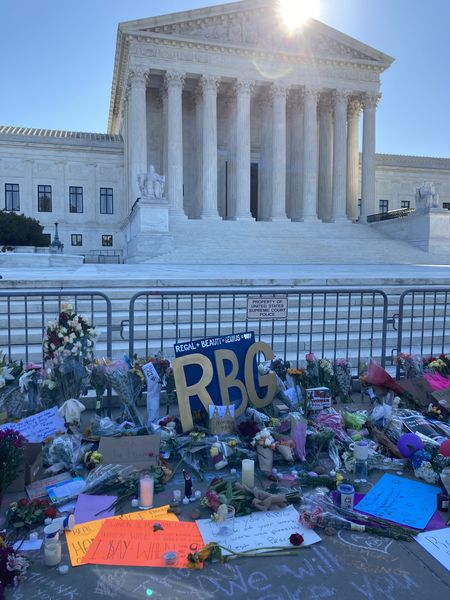 In the beautiful autumn day, the public space in front of the Supreme Court was covered with flowers, cards, candles, and posters left by the public. Little girls and mothers wrote messages of gratitude in chalk on the sidewalks.

The remarkable life and legacy of Ruth Bader Ginsburg has touched every one of us. Her profound commitment to the people of this country is evidenced by her deep respect for the law and the fundamental value of equality for all people.

Her death comes amidst a deeply partisan and challenging election season. President Donald Trump will nominate a candidate for the Supreme Court and Senate Leader Mitch McConnell will try to rush through a replacement for Justice Ginsburg.

We reject this move.

Mr. McConnell established a precedent in 2016 when he held up President Barack Obama’s Supreme Court nominee by not allowing a vote in an election year. However, just hours after Justice Ginsburg’s death with less than 50 days before the election, he announced that the Senate will conduct hearings and vote on President Donald Trump’s nominee.

Yet, Mr. McConnell cannot find the political will or time to provide relief to millions of Americans suffering during this COVID-19 pandemic. He has refused to negotiate with the House of Representatives on another COVID-19 relief package that would provide vital food, shelter, and healthcare.

FCNL opposes any action by the US Senate before or immediately after the election of a vote on a Supreme Court justice.

Sen. McConnell’s use of political power is in stark contrast to the courageous and respectful way that Justice Ginsburg wielded the office that gave her power.

Her jurisprudence helped establish that equality of rights under law should not be denied or abridged, and no one should experience harassment or violence based on sex or gender identity. The precedents established during her tenure in the Supreme Court that provide for this equality make the United States a stronger country.

FCNL opposes any action by the US Senate before or immediately after the election of a vote on a Supreme Court justice. The duly elected president in the November election should appoint, and the duly elected Senate should confirm the next justice of the Supreme Court.