Following the Holocaust, the United States and international community vowed to “never again” stand idly by in the face of genocide.

However, since that time, the occurrence of genocide and other mass atrocities in the former Yugoslavia, Rwanda, Darfur, and elsewhere have tested the capacities and stirred the consciences of the U.S. and other governments.

These experiences have taught us that strong high-level leadership, the right government structures and tools, and adequate resources are required to most effectively prevent and respond to mass atrocities.

What are mass atrocities? What is genocide?

Mass atrocities are large scale and deliberate attacks on civilians. These attacks include – but are not limited to – genocide, crimes against humanity, and many war crimes, all of which are defined under international law.

Genocide is a very specific term that is legally defined as “any of the following acts committed with intent to destroy, in whole or in part, a national, ethnic, racial or religious group, as such: killing members of the group; causing serious bodily or mental harm to members of the group; deliberately inflicting on the group conditions of life calculated to bring about its physical destruction in whole or in part; imposing measures intended to prevent births within the group; [and] forcibly transferring children of the group to another group.”

Early prevention refers to actions that decrease the likelihood of atrocities before they occur or may be imminent. The objective is to take action to eliminate or reduce the root causes that may give rise to genocide and other forms of mass atrocities. Early prevention has a long-range time horizon and typically has ancillary benefits because its efforts are likely to affect the structure of the environment more broadly (e.g.: good governance). 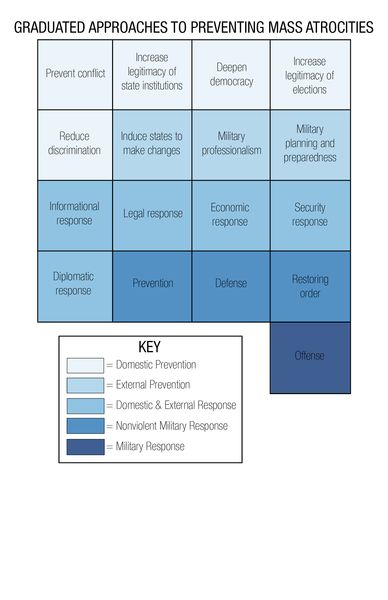 Response refers to actions that aim to stop or to limit the scope of atrocities once they are underway, and – in effect – prevent further atrocities from occurring. Response measures typically have one of two objectives. They are designed to either persuade a would-be perpetrator not to commit atrocities, using coercive or non-coercive means, or limiting the ability of a perpetrator to carry out violent acts against civilians.

Despite some perceptions, responding to atrocities does not necessarily mean military intervention. In fact, the vast majority of prevention and response options do not require the use of military force. As described by the Fundamentals of Genocide and Mass Atrocities Prevention by Scott Straus, 15 of the 16 approaches to preventing mass atrocities do not involve a military response. Significant work is being done to build out the entire range of options short of military intervention to ensure a more complete toolbox that is able to better prioritize early prevention.

Read more about the development of U.S. genocide and mass atrocities prevention policy.

What is the administration’s role in preventing genocide and mass atrocities?

In 2011 – in direct follow up to the Genocide Prevention Task Force’s 2008 Report and with the bipartisan support of the U.S. Senate – President Obama issued Presidential Study Directive 10 (PSD-10). PSD-10 declared atrocity prevention to be a core national interest and a core moral responsibility of the United States, and established the Atrocities Prevention Board (APB).

The APB is responsible for coordination and prioritization of atrocities prevention across administrative agencies and departments, including the Department of State, Defense, Treasury, Justice, and Homeland Security, the Joint Chiefs of Staff, U.S. Agency for International Development, U.S. Mission to the UN, the Office of the Director of National Intelligence, the Central Intelligence Agency, and the Office of the Vice President. The APB met for the first time in April 2012, and continues to meet once a month at the Assistant Secretary level in addition to more frequent meetings at the working level (known as the sub-APB).

In 2016, President Obama issued Executive Order 13729, “A Comprehensive Approach to Atrocity Prevention and Response,” that fulfills the commitment made when the APB began its work. The Executive Order publicly articulates the structure and functions of the APB, and directs U.S. agencies to take on a broader atrocities prevention strategy.

The eight years following the release of the GPTF Report have seen innovative structural reforms, creative approaches to emerging crises, and the emergence of a small and dedicated cadre of mid-level officials committed to atrocity prevention. However, despite these developments, genocide and mass atrocities prevention remains outside the mainstream of U.S. policymaking.

What is Congress’ role in preventing genocide and mass atrocities?

Congress is responsible for funding, oversight, and offering policy guidance. This includes work to push the administration to prioritize the prevention of mass atrocities. In 2011, the Senate unanimously passed Senate Concurrent Resolution 71 that urged the creation of the Atrocities Prevention Board.

In terms of funding, Congressional leadership in support of atrocities and conflict prevention accounts has been mixed. For example, the House of Representatives has repeatedly reduced and even sought to zero out key accounts like the Complex Crises Fund. However, in 2016 both the House and Senate supported funding for Fiscal Year 2017 specific to atrocities prevention. The NGO community continues to call on Congress to support full funding for existing prevention accounts.

What is the future of preventing genocide and mass atrocities?

In late 2016, a bipartisan Experts Committee on the Prevention of Mass Violence released “A Necessary Good: U.S. Leadership on Preventing Mass Atrocities,” a roadmap for the next administration to sustain and strengthen U.S. atrocity prevention efforts. The report provides nearly 40 recommendations that bolster existing atrocity prevention measures, develop new initiatives, and ensure that the issue is prioritized and institutionalized within the national security bureaucracy.