Many members of Congress are weighing in and urging the administration to end separating families, but more must join the chorus of opposition.

The Trump administration is systematically ripping children away from the arms of their parents and calling it “border security”. Children are forcibly going into federal care while their parents are jailed and criminally prosecuted.

The administration does not need Congress to pass legislation to end their "zero-tolerance" policy, but vocal opposition from members of Congress is important for pressuring the administration to reverse this practice.

Here are three ways that you can weigh in with Congress:

The House is voting on two immigration bills this week which will worsen the injustices faced by asylum seekers and children at our borders. Some have alleged that one bill would end family separation; it will not. Instead, both bills will further reduce access to asylum. These bills will put more children and asylum seekers in jail or send them back to face violence in their communities.

2. Call Your Senator & Urge Them To Speak Out

If they haven't already, your members of Congress should make public statements opposing this practice and put pressure on the administration to immediately end this policy. They should also increase oversight of existing enforcement and cut DHS funding that is fueling family separation.

I urge you to support policies that protect and unite immigrant and refugee families. The administration is detaining and prosecuting parents, and forcibly separating them from their children. I call on you to do everything in your power to stop family separation. Congress should increase oversight over the Department of Homeland Security and urge them to end unjust policies. Congress should cut funding for harmful immigration enforcement that separates families. I value the sanctity of the family and believe Congress should act to bring families together, not keep them apart.

3. Write A Letter to the Editor Urging Increased Oversight and Reduced Funding for ICE & CBP

Make your views known by writing a letter to the editor or a guest column to your local paper. Congressional staff monitor this closely, especially if you name your members of Congress directly. 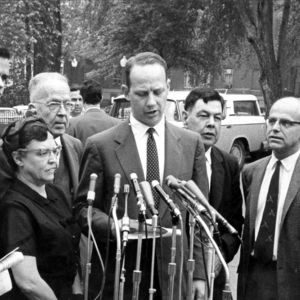 Publishing letters to the editor and op-eds is a great way to get the attention of your members of Congress. But first, you need to write a piece that tells your story – not just the facts.

We are especially looking to place letters and op-eds in Oklahoma, Alaska, North Dakota, Louisiana, Montana, New Hampshire, Wisconsin, West Virginia, Washington-04 and Virginia-02 so that members of the Appropriations Committee hear the urgent call from their constituents to cut DHS funding as they discuss funding before the end of this fiscal year (September 30). Please share with all your friends who live in those states.

Children and young people should not be used as bargaining chips to advance harmful immigration proposals or fund additional enforcement. A closed-door, enforcement-only immigration policy is not the solution our nation needs. 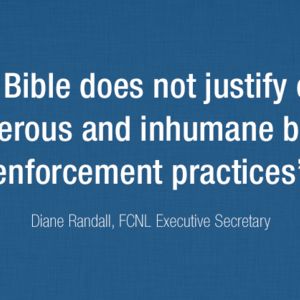 Washington, DC (June 15, 2018) – The Friends Committee on National Legislation (FCNL) today strongly criticized Attorney General Jeff Sessions for using the Bible to justify the separation of children from their families at the United States-Mexico border.

Background Family Separation at the Hands of the State ›

The Trump administration announced earlier this month that as a matter of policy they would be forcibly separating family units who have entered the United States together. 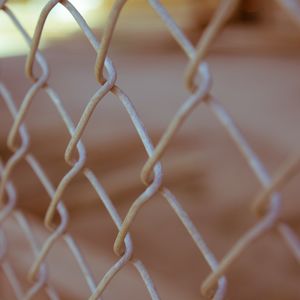 In concert with the National Day of Action for Children, faith leaders across traditions join the national outcry against families being separated at the U.S. border, the detention and prosecution of parents travelling with children, and documented acts of abuse by Customs and Border Protection (CBP) and Immigration and Customs Enforcement (ICE) against vulnerable families.