FCNL has provided our responses to commonly raised questions regarding military withdrawal from Afghanistan. 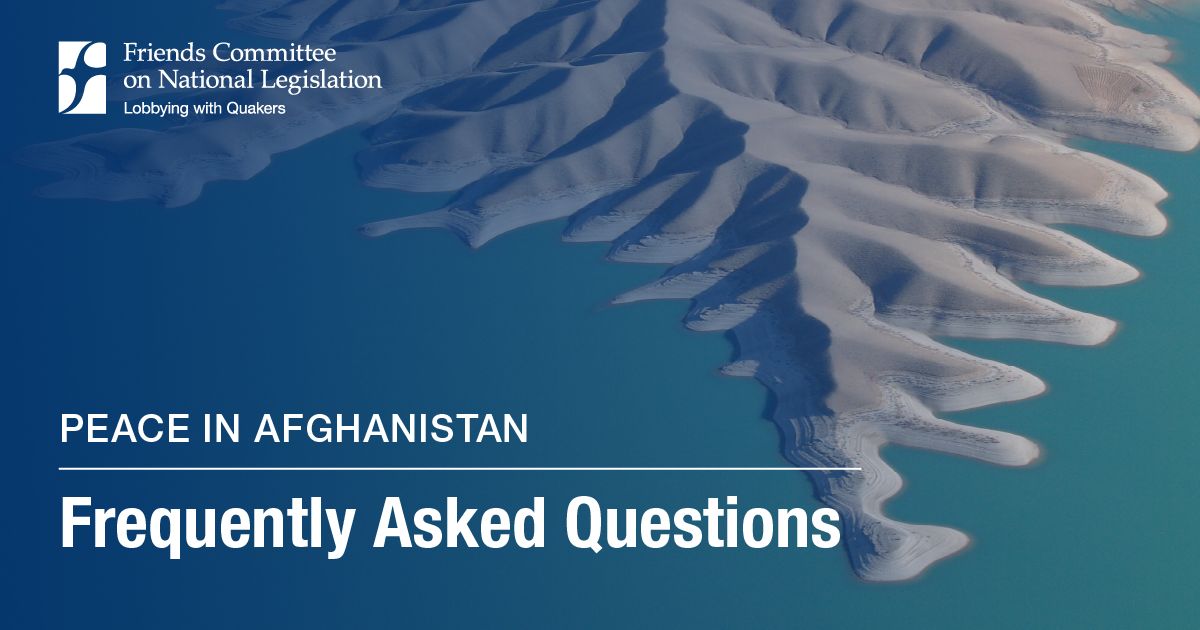 Q: Even if we remove combat troops, shouldn’t we maintain a small contingent and/or continue drone strikes for counterterrorism purposes?

The objective should be to abandon a failed strategy, not to simply continue it on a smaller and even less transparent scale. Evidence is clear that U.S. military operations—including not just traditional combat troops, but also targeted strikes and partnerships with abusive militias—only fuel recruitment for terror groups and help them grow.1

Ending militarized counterterrorism practices in Afghanistan would not only remove a continuing source of grievances, but also a high-profile target of opportunity. Instead, ramped-up bilateral and multilateral diplomacy paired with effective development assistance would address some of the root causes of violence and strengthen systems for peaceful conflict prevention and resolution.2 Americans and Afghans alike would be much safer with such a shift in approach.

Q: What will happen to women and girls in Afghanistan after we leave?

Although U.S. diplomacy and assistance have helped women achieve important gains in Afghanistan, U.S. bombs and violence have not. In fact, the ongoing war creates rampant insecurity, making Afghanistan one of the worst countries in the world to be a woman.3

“We have been fighting for our rights long before the American military arrived and will continue long after it has withdrawn. We kept struggling and educating our young ones in underground schools before America came to help us, and we kept our struggle going when American money went to empower warlords who were more interested in personal enrichment than advancing peace. Afghan women have sacrificed greatly for a war they never asked for.”

Indeed, evidence demonstrates that Afghans want to see continued advances in women’s rights. This is something that simply cannot be secured by external actors. The best way for women in Afghanistan to be protected is for them to have a seat at the table and to be meaningfully included in a political solution.

The best thing the United States can do to help Afghan women is to use our diplomatic, development, and peacebuilding tools to support them in ending the violence and determining their own future.

Q: What if terror groups or the Taliban take over after we leave? What if there’s a civil war?

The reality is that—even after nearly two decades of U.S. military engagement (which has included a troop presence as high as 100,000)—the Taliban still controls or contests more territory than at any point since 2001, a violent insurgency rages on, and the challenge of terrorism has only proliferated.4

Quite simply, all evidence tells us that U.S. military force cannot protect against an Afghan civil war or the growth of armed terror groups. Staying in militarily seems only to make those problems worse.

There very well may be an uptick in violence after U.S. troop withdrawal. But keeping troops in cannot force the parties to reach a political solution and may even make it easier for them to avoid serious negotiations. Only through an inclusive and verifiable peace agreement can the violence truly be reduced, and only by addressing root causes like poverty and corruption can Afghanistan achieve stability and successfully confront the challenges of terrorism and insurgency.

Q: What if there is a new terror attack against the United States? Won’t those who supported a withdrawal from Afghanistan be blamed for it?

Regardless of the status of U.S. troops in Afghanistan, it is almost certain that supporters of military aggression and occupation will exploit any violence inspired or facilitated by transnational terror groups to blame those who advocate peaceful, diplomatic solutions. But the U.S. occupation of Afghanistan has not made Americans safer; in fact, it has only contributed to the dispersion and growth of terror groups.

However, the challenge of terrorism does not pose an existential threat to the U.S. homeland and should not be over-inflated to score political points. The reality is that about half of all victims of international terror are Afghans. It is also important to remember that there is no evidence to suggest that the attacks of 9/11 could have been prevented by an occupation of Afghanistan.

After all, 15 of the 19 hijackers were citizens of Saudi Arabia and none were Afghans. And although the Taliban allowed al-Qaeda to operate within its controlled territory, most of the planning for the attack took place in Germany and Spain.

[1] Lizzie Dearden, “Former US Military Advisor David Kilcullen Says There Would Be No ISIS Without Iraq Invasion,” The Independent, March 4, 2016 (“We have to recognize that a lot of the problem is of our own making.”); David Plotz, “What Does Osama bin Laden Want?” Slate, September 14, 2001; Steven Feldstein, “Do Terrorist Trends in Africa Justify the U.S. Military’s Expansion?” Carnegie Endowment for International Peace, February 9, 2018; Christopher D. Kolenda, Rachel Reid, Chris Rogers, and Marte Retzius, The Strategic Costs of Civilian Harm: Applying Lessons from Afghanistan to Current and Future Conflicts (Washington, DC: Open Society Foundations, 2016).